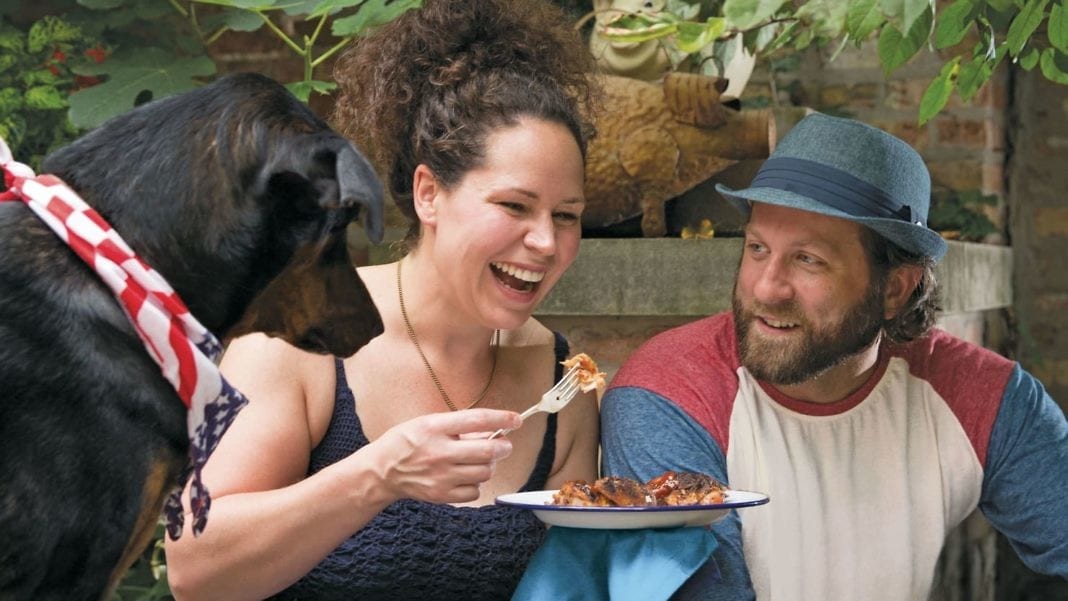 After a shift what is your favorite guilty pleasure to eat? “Honestly, most every night I have a big bowl of ice cream. I’ve been eating a lot of French Silk. It’s Edy’s slow-churned, so it makes me feel better about myself because it’s a little bit lower in calories. It has little bits of chocolate. My all-time favorite ice cream is Butter Crunch from Friendly’s. Only East Coast folks know what this is. It’s this buttery, rich-flavored ice cream and there are little bits of gooey toffee throughout. I used to make my dad take me to get this ice cream all the time when I was growing up.”

What is your favorite music to listen to while you cook? “I let my cooks pick all the music because I don’t feel like I’m cool enough anymore to pick stuff that they won’t make fun of me for. But I banned screaming music. The butchers listen to it sometimes, which I kind of understand. It’s fitting. I like everybody to play happier music.”

What cookbook is your go-to resource for inspiration? “I always enjoy reading Jamie Oliver’s cookbooks. Just because they’re so impressively massive and everyone has such beautiful, casual tasty looking things.”

Is there one dish you won’t cook? “When there’s something that I don’t really love, I just try to make a version of it, that I do like.”

What city’s food scene has impressed you recently? “I was just in LA. I went to David Chang’s new restaurant. Antonia, my friend who lives there, took me to some places that I hadn’t been before. It just seems like there’s a lot of cool new places there. I only got a little glimpse of it but it made me excited for my next trip [to LA] to try some more places.”

Did you grow up cooking as a kid? “I did. My mom was a really good cook. She had a whole bunch of cookbooks, maybe like 30, and a file of a bunch of recipes, and every Sunday my sister, my mom and I would sit there and pick out our whole week’s menu and we would hang it on the refrigerator. Our friends would come over for different nights. My mom was a really great cook. I was really fortunate to grow up eating and cooking.”

What’s the first dish you cooked yourself? “We went to Epcot on a family trip and we ate in France. We had ham, mushroom and cheese crêpes. When we got back home I used a cookbook to get a crêpe recipe but the rest I kind of made up. I was 8 years old and my mom said, who knows if she was telling the truth, that it tasted just like the one at Epcot. But that was the first thing I cooked myself.”

Name the all-time best cooking show. “I grew up in a different era of food TV, and Yan Can Cook was always my favorite show. ‘If Yan can cook, so can you!’ That’s been in my, head since I was little. I was always watching that, Julia Child and the Frugal Gourmet, while my friends were watching like what normal kids were watching.”

Is there one chef you’d like to cook with? “I’ve met Jacques Pépin many times but I’ve not gotten to cook with him. He actually looks like my dad. My dad was eating at my restaurant once and my cooks were like ‘look, it’s Jacques Pépin.’ And I was like ‘no, that’s just my dad.’”

What is the one tool that you always make sure to pack when you’re traveling for business? “If we’re trying to do any baking, and all of our recipes for baking are by grams, we always bring a scale with us just to make sure it works.”

We got caught up with Stephanie Izard at the South Beach Wine & Food Festival.

How Quest won the battle of the protein bars

3 lifehacks for your overworked kitchen this holiday season