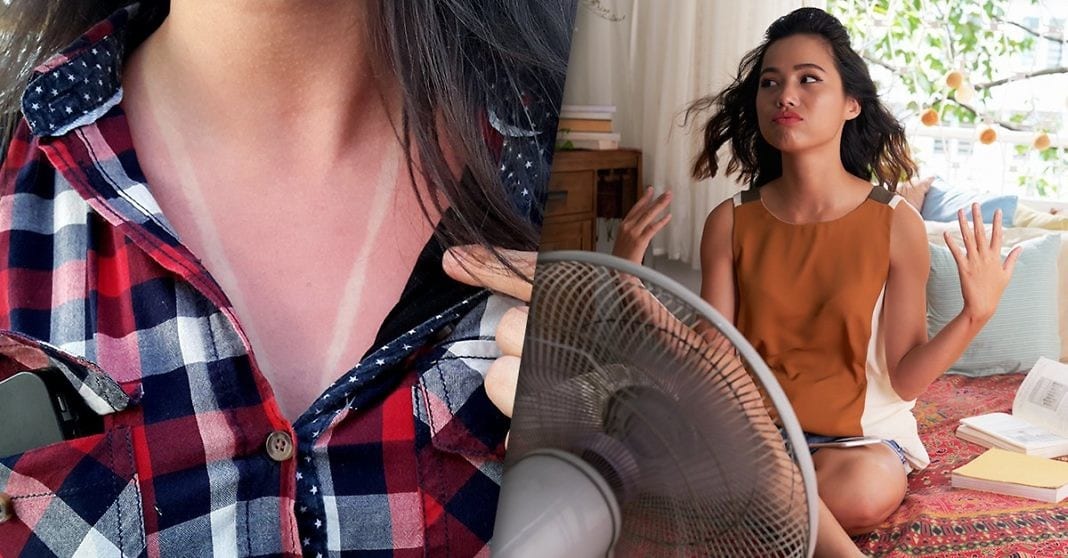 Listen, summer is the worst of the four seasons.

I refuse to believe this is an unpopular opinion as people make it out to be. You know why?

Because there are so many concrete reasons summer sucks. While the rest of you are yelling…

…you can find me hiding in my air-conditioned bedroom avoiding all the perils of the hottest season of the year.

I know that after reading this, at least a few of you will see the light and come to the same conclusion I have: Summer is for suckers.

Unless you live in a magical fairytale land where temperatures are mild all the time, summer is a freaking b*tch when it comes to the temperature.

The beach is never what it’s cracked up to be.

It’s always way overcrowded, sand gets everywhere (and I mean EVERYWHERE), and the water is cold. Next.

Plus, there are actual things that can kill you lurking in the ocean.

One time, a beach trip was completely ruined because there were jellyfish everywhere. My dad went into the water and came out with a jellyfish in his pocket.

The beach! Is not! Worth it!

The next one kicks it up a notch…

They’re always in the weirdest spots. And they’re never uniform. Sunburns make you look like a spotted cow.

The greatest trick the devil ever pulled was convincing the world that day drinking was a good idea.

Day drinking seems like a brilliant idea. And you know what? It can be. In any other season. But summer day drinking, arguably the season in which the most day drinking occurs, is absolutely the worst.

You’re hot and melting and baking in the sun while dehydrating yourself further with alcohol. Whose idea was this?!

Shorts are pants for masochists. Flip flops can hardly be categorized as shoes. Rompers are for babies. I could go on, but I’m too angry.

Oh, is your body not “bikini ready”?! Then you don’t get to enjoy summer! Because it’s too hot to wear real clothes, everyone’s body is on display during the summer, and you know what that means!

People are being judged left and right because our society has ingrained in us the poisonous idea that there are “right” and “wrong” bodies.

For two months, you can’t breathe or touch anything any time you enter a car.

God forbid you have leather seats! Every time you get into a car during the summer, you’re risking being boiled alive like a lobster.

The next one is something you probably never think about…

Water sports seem like the perfect go-to for those hot summer days, but for so many of them, you need like, hundreds of dollars worth of equipment and years of training to be even remotely competent at them.

Riding in convertibles is the worst.

Movies make it seem so effortless and fun, but riding in convertibles, one of summer’s favorite pastimes, is an utter disaster for anyone who has hair longer than a buzz cut.

If you have long hair and you ride in a convertible, you might as well plan on shaving your head after the ride because those knots are never coming out.

Kids aren’t in school during the summer, which just means that instead, they’re everywhere that you are. There’s no escaping children in the summer.

For anyone who lives without central air conditioning, summer is a nightmare.

There are many, many days when window units don’t even cut it. There’s nothing as terrible as not being able to sleep because you’re too hot.

The next one turns up the temperature even further…

Cooking in the summer is a sweaty mess.

It’s already 95 degrees, I’ve got the air conditioner blasting, and now you want me to turn on the oven? Are you insane? If anyone has any secrets to cooking in the summer without melting into an actual puddle, please get at me.

It’s so sunny and crap that you feel guilty if you just want to stay inside and watch movies.

If you live in a place where sun is scarce, you feel totally pressured to make the most of the sunny days, even if it’s literally 100 degrees out and too hot to move. I’m here to tell you not to feel guilty about staying inside on those days.

Summer is the season of bugs. When you’re not being eaten alive by mosquitos, you’re accidentally swallowing gnats or walking your face right into a spider web. It’s the worst.

Humidity is the actual devil.

Right now, I live in Los Angeles, which is super hot but also super dry. Whenever I go home to New York, the humidity wreaks havoc on my entire being in ways I could have never imagined.

It’s not just the poofy hair (but it is also that). It’s the perpetual wetness. The heightened smell of the air. The heaviness. Humidity is not your friend.

You sweat while doing literally anything.

There are some people who just don’t sweat. I am not one of those people. In the summer, I’m constantly reminded that I sweat. From every pore of my body. My knees sweat. My eyelids sweat. My toes sweat. Summer is nasty, and I will never forgive it.

Share this with someone who needs to learn the truth about summer.

The Big Con: what is really at stake in this US election

How to eat: chocolate brownies