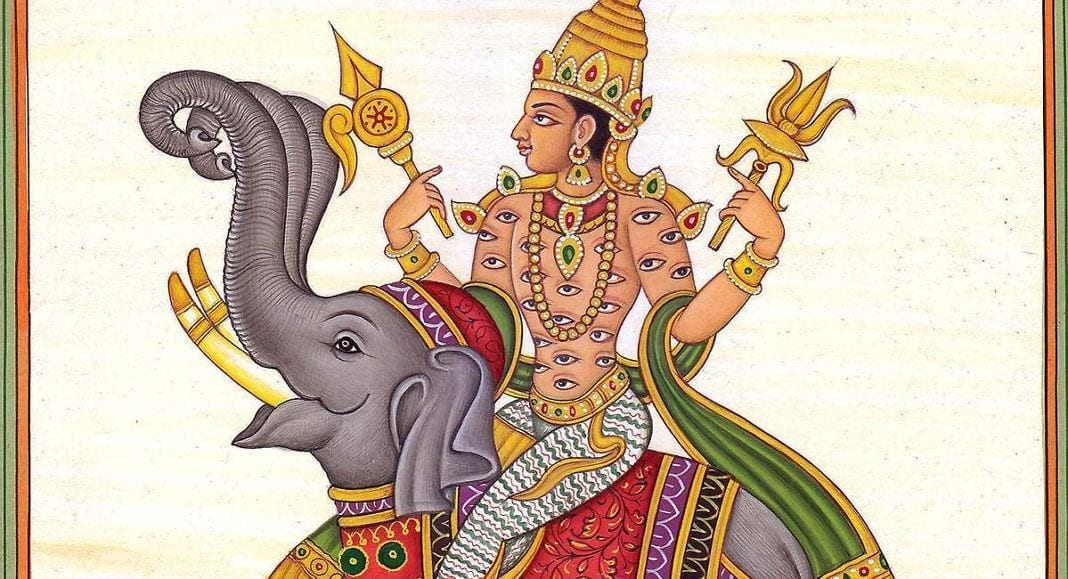 Around about the time Zeus turned into a swan and raped a girl, we figured out that mythology had some pretty weird sexual hang-ups. But there’s “ornithological sexual assault” weird, and then there’s …

#6. Indra, The Hindu God With A Thousand Vaginas

Indra was considered the king of the Hindu gods. Much like Zeus, he threw lightning bolts at people and disguised himself as women’s husbands so that he could have sex with them on the sly. Apparently it is very hard for the lords of all creation to get some legitimate action.

Weird. You’d think those two extra hands would give him an edge.

Indra lusted after Ahalya, the wife of the sage Gautama, so he floated down to Earth and disguised himself as Gautama while the sage was away, then proceeded to initiate the no-pants dance with Ahalya. When Gautama found out, he was hopping mad and decided to inflict an ironic punishment on Indra — he cursed the god to sprout a thousand vaginas all over his body, presumably while yelling, “Yo dawg, I heard you like pussy!”

Too bad no exact illustration is available. A picture is worth a thousand vulvas.

Indra was mortified and went into hiding, and the other gods went looking for him. When they finally found him, he was covered in blood. And it wasn’t because he was hurt. The gods, repulsed by Indra’s full-body menstruation, undid the curse by turning all of the vaginas into eyes, which gave Indra his official title as the Thousand-Eyed God. Although, in another version of the story, they merely try to hide the vaginas by painting them to look like eyes, because apparently in those days they either had really weird eyes or really weird vaginas.

Indra spent the rest of his days seeking a cure for pink eye.

#5. Maximon, The Guatemalan Saint Of Gambling And Debauchery

Catholicism has patron saints for just about everything, and if you travel to South America you can find some rather obscure ones. Like in Guatemala, where they pray to Maximon, the drunken, chain-smoking saint of wanton debauchery.

God said, “Let there be Camel Lights.” And it was goooooood.

The Vatican strongly discourages Catholics from praying to Maximon, but that doesn’t stop them. So what is it about Maximon that makes him distasteful to the Church but endearing to the people? It’s probably his origin story. One day, when all of the other men were out working the fields, Maximon did the only logical thing he could: He had sex with literally all of their wives. All of them. In one day. The enraged husbands returned to find the entire town sticky and satisfied, so they did the only logical thing they could: They chopped off all of Maximon’s limbs, then lynched him. That’s right: They tetherballed the poor bastard.

“So, I guess no high-five for all the sex, then? Don’t leave me hanging, bro!”

Today, venerators of Maximon consider him a saint of fertility, male sexual power, and wealth. They set up shrines to him in their homes, which usually take the form of a short, limbless, mustachioed man in a sombrero, smoking a cigar, and surrounded by offerings of booze, cash, and fruit.

He is also the patron saint of slot machines.

#4. Priapus, The Greek God With A Comically Huge Dick

Ancient Greek art tended to portray heroes with cute little penises tucked neatly away. But that rule went straight out the window if you were talking about the Greek god Priapus, who was more commonly portrayed like this:

And now you know where the word “priapism” comes from.

Priapus was the son of Aphrodite. The legend goes that the queen of the gods, Hera, was jealous of Aphrodite’s superior beauty, so she cursed Aphrodite’s son to be born hideous, and with a comically oversized schlong. Basically, he would be Ron Jeremy.

The sight of Priapus offended the small-dick-loving Greek gods, so he was cast out of Mount Olympus and lived on Earth with a bunch of satyrs, people with horse-like features who taught him how to live in harmony with nature and fuck just … everything.

Oh my. What cold and cruel punishment.

In one story, Priapus tried to get it on with the goddess Hestia while she was asleep, but a nearby donkey brayed so loudly that it woke her up, and Priapus fled the scene. Greeks have celebrated their Feast of Hestia ever since by decorating donkeys. Incidentally, that’s also where the popular party game pin the tail on the donkey came from — though it wasn’t always a tail …

All right, so that last bit isn’t technically true, but it should be.

An Ode to the Grilled Cheese Sandwich (With Cooking Tips)