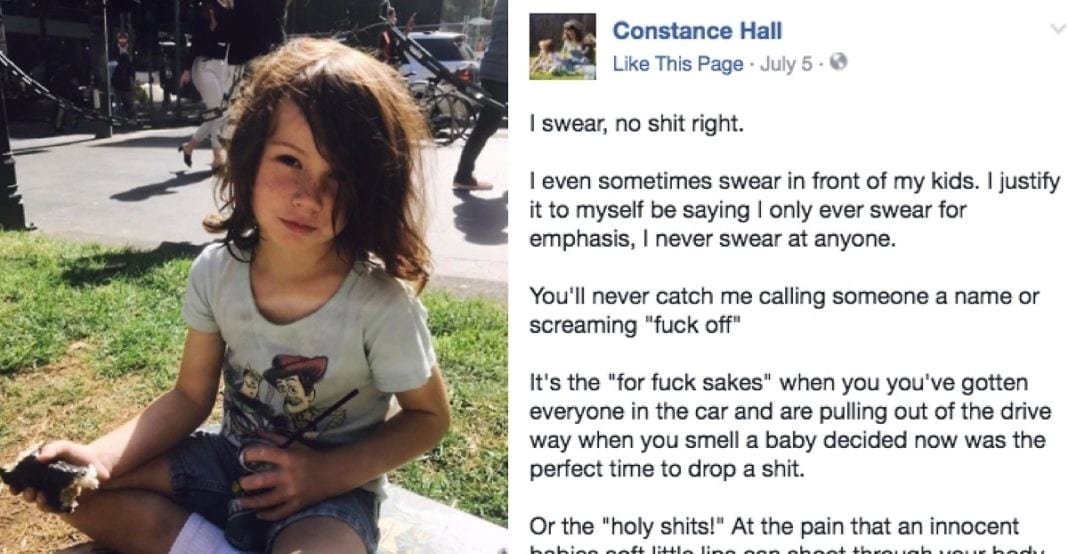 Imagine you’re cooking dinner while your kid plays on the floor in the kitchen.

You open the oven door to peek at the casserole inside. Hmm … wonder how it’s coming along.

You boldly extend your index finger, completely unprotected, and stick it into the dish. Warm, but not quite there.

As you withdraw your finger, you accidentally make momentary contact with the blazing-hot glass baking dish. SEARING PAIN. Your nerve endings fire emergency signals to your brain. Retreat! Retreat!

You pull out and slam the oven door shut, immediately bringing your scorched finger to your mouth for some reason. You turn around, and your 4-year-old is laughing maniacally, parroting you:

Congratulations. You have ruined your child.

Just kidding. Mom and blogger Constance Hall recently had a similar experience, and you know what? She says it’s no big deal.

In a viral Facebook post, Hall writes that her young son, Arlo, “has been dropping a few bombs,” after overhearing her.

“Does it bother me?” she wrote. “Not much, meanness would bother me more.”

She explains: Her son is getting to an age where he’s going to copy his friends, no matter what she teaches him. Better that he learns to surround himself with good people than to adhere to a rule like “Never curse!”

“But what we can do is teach them how to recognise qualities that we respect. Point out, ‘how kind was Charley lending you his drink bottle?’ And ‘did you see how Sam helped out that younger kid?’ ‘I love the way Sophia is always making funny jokes.’

So while it’s important to say ‘don’t swear it’s not cool’ it’s equally important to teach your kids to strive to find friends with similar moral codes to your family.

That way when they do ignore you and run off with their mates, they are in good hands, maybe cheeky ones, maybe sweary ones, but good ones none the less.

Because our house hold might be a sweary one, but it’s a bloody kind one and it’s full to the brim with love.”

I swear, no shit right. I even sometimes swear in front of my kids. I justify it to myself be saying I only ever swear…

Yelling out the F-word when you stub your toe doesn’t teach your kids much of anything. However, if they see you abusively yelling “F*ck you!” at someone who cuts you off in traffic, that’s a different story.

You could even replace swearing with plenty of other behaviors considered to be “bad.” Does your kid like to sleep in a little too much? Have too much of a sweet tooth?

OK. Maybe those are things to work on. Maybe not.

But remember that one of the best things you can do as a parent is to raise your children to be kind to others and to themselves.

It’s not the only thing that matters, but it helps put all the other “shit” into perspective.