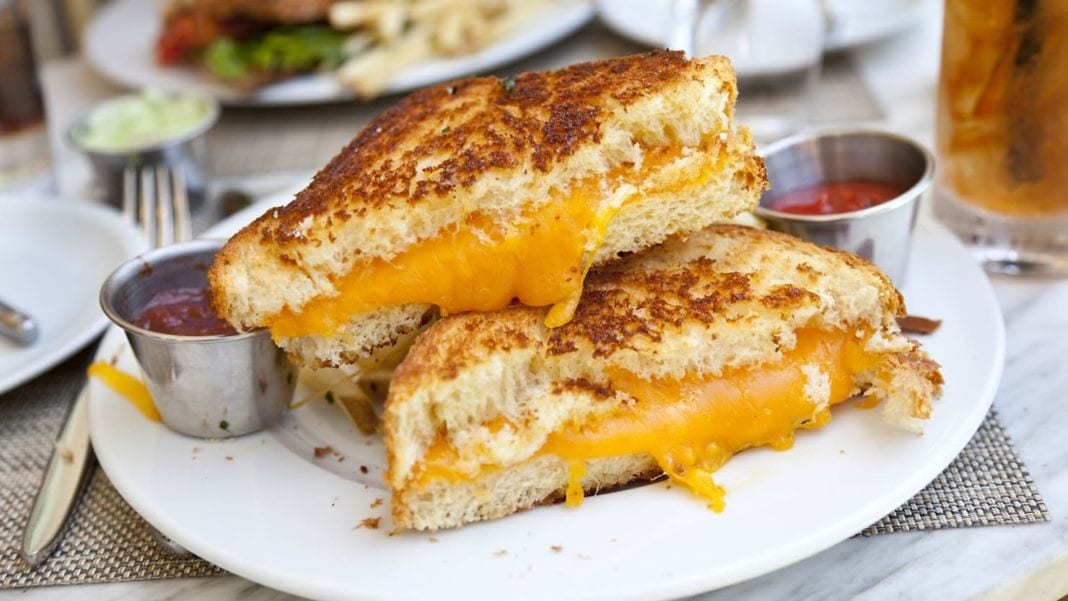 From avocado toast to hamburgers on English muffins, sandwich trends come and go but the popularity of the simple grilled cheese endures. With every new fad, it refuses to fade; it stands firm on menus, as it has for millennia.

The French have their Croque Monsieur and the Italians their panini, but I prefer our buttery golden squares. I will forever be in awe of the deliciousness that can spring from three humble ingredients found in, I would guess, 99.9-percent of all households. All you have to do is heat everything up in a pan. Everyone has a pan! But how many people have a panini maker? How many have the time to fuss over béchamel? As you’re coaxing the sauce to bubble, you could already be enjoying your grilled cheese sandwich. Just let me have my cheddar cheese between two pieces of white bread and all is good with the world.

Of course, the grilled cheese sandwiches encountered on restaurant menus or Instagram these days tend to be more complicated than that. It’s now about pedigree when it comes to the bread and, especially, the cheese. “From France to Wisconsin to small New York goat farmers, the respect for the origins and process of cheese-making are back on the forefront,” says New York restaurant consultant Arlene Spiegel. “The variety allows chefs to show off their cheese knowledge while providing a ‘halo’ effect on this simple dish.” A $15 grilled cheese sandwich from an exquisite cheese shop is a food lover’s version of that $37 Chanel lipstick—an affordable luxury.

While sandwiches weren’t invented until the 18th century, ancient Romans actually created something pretty close to a grilled cheese long before. It’s likely they “put cheese on bread” and heated it up, says John Wilkins, Ph.D., a professor of classics and ancient history at the University of Exeter, UK—albeit in a primitive oven instead of a pan. Even back then, humans knew that something good would come out of melting cheese on bread. Over time, some very important discoveries occurred, including the fact that buttering the bread leads to more crispiness.  The result after so many centuries of experimentation is a near-perfect food.

In fact, grilled cheese sandwiches satisfy our ADHD taste bud tendencies. “Our brains are wired to tune out what’s constant and tune into contrasts,” says Ali Bouzari, author of Ingredient: Unveiling the Essential Elements of Food. So when both sides are grilled to perfection (which occurs when the butter is completely softened and applied evenly all over both slices, before placing them in a pan), you experience that happy crackle as you take a bite, followed by the soft pillow-y texture inside, and then the gooeyness of the cheese. Food scientists call this “dynamic contrast.” Add a cool slice of tomato or apple (but only after you’re done grilling, instructs Murray’s Cheese executive chef David Elkins) and you up your game by also varying the temperature and tang. Salty slivers of ham or bacon can also do the trick.

The beauty of the traditional grilled cheese is that all the elements get to shine; nothing falls by the wayside. And the best part is that the formula for all this is rather simple. “As long as you layer the ingredients bread-cheese-extra stuff-cheese-bread and avoid overstuffing, the sandwich will hold together,” says Mark Bittman, the author of the How To Cook Everything series, including the forthcoming How To Grill Everything.

At the same time, a grilled cheese sandwich is most definitely something to be judged by its cover—which is to say, two square slices of bread cut from a loaf and buttered. Some people might slather on olive oil or mayonnaise instead, but this is not the grilled cheese nature intended. One of the earliest American grilled cheese recipes featuring the use of a pan (or “chafing dish”)—found in Marion H. Neil’s 1916 cookbook Sandwiches, Salads, and Chafing Dish Recipes—instructs home cooks to “place thick slices of cheese between the bread and fry in plenty of hot butter.” (While this delicacy wasn’t referred to as a grilled cheese sandwich per se, it had an equally apt name, “Cheese Dreams.”)

Still not convinced that butter is the way to go? Well, butter has special proteins, says James Briscione, author of The Flavor Matrix, “they add caramel-y-nutty brown flavors when warmed.”

The best grilled cheeses today are a tribute to the wonders of food science. In The Kitchen as Laboratory, protein chemist Jennifer Kimmel writes that a pH between 5.3 and 5.5 (which is the case with manchego, gruyere, gouda, and mild cheddars) provides the ideal level of gooeyness for a grilled cheese sandwich. Elkins from Murray’s favors cheddar (“because people expect it”), gouda (“for its tang”), and fontina (“for its meltiness”).

Heidi Gibson, co-owner of San Francisco’s The American Grilled Cheese Kitchen, an early-comer to the grilled-cheese-themed restaurant trend, experimented for several rounds before arriving at her winning combination of cheddar (“for the nostalgia factor”), Monterey Jack (“super local”) and Havarti (buttery and creamy).

These nuances were not as crucial back in the 1940s, when war-weary Americans wanted something easy, cheap and filling. White bread and American cheese did the job, and, as such, grilled cheese sandwiches were an ideal choice to include in the 1945 edition of a U.S. Navy cookbook. By the time the 1960s rolled in, packaged food was considered quality food—and, in turn, individually wrapped Kraft singles debuted in grilled cheese sandwiches across the land.

Part of grilled cheese’s staying power, it seems, is its uncanny ability to evolve in step with the taste of our times, while remaining true to its original self. What will we prize in our food choices decades from now? Whatever the case may be, I know I’ll find a grilled cheese sandwich on the menu to answer my every craving.

Donald Trump Was ‘PROBABLY’ Going To Be Named TIME’s Man( Person) Of The Year,...

Donald Trump claims he has ‘absolute right to pardon myself’