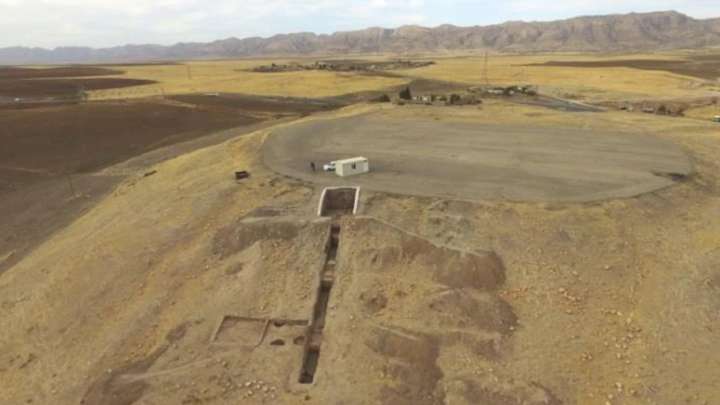 After translating a bunch of 3,200-year-old clay tablets found hidden in a collection of ceramic jugs in what is now modern-day Iraq, archaeologists realized they were sitting on the ancient lost royal city of Mardaman. Eat your heart out, Indiana Jones.

Archaeologists from the University of Tübingen in Germany first came across the 92 clay tablets in the summer of 2017 at a site in current-day Bassetki, the Autonomous Region of Kurdistan in Iraq. Many of the tablets were left crumbled and damaged after laying in ceramic vessels for thousands of years in the baking desert, so their first task was to reassemble them to their original form.

“They may have been hidden this way shortly after the surrounding building had been destroyed. Perhaps the information inside it was meant to be protected and preserved for posterity,” lead researcher Professor Peter Pfälzner explained in a statement.

The next hurdle was to painstakingly translate the tablets from Cuneiform script, one of the earliest systems of writing. The tablets were found to date back to approximately 1250 BCE, when the city was part of the Middle Assyrian Empire.

To the surprise of researchers, the deciphering of the tablets revealed that the present-day town of Bassetki, where the tablets were discovered, was actually the site of the ancient royal city of Mardaman. Many sources have explained how important this northern Mesopotamian city was between 2200 and 1200 BCE, however, no one has ever actually been able to locate it until now.

Old Babylonian sources explain that Mardama, as it is also known, was the centrepiece of a great kingdom that was eventually conquered  in 1786 BCE and integrated into the Upper Mesopotamian empire under Shamshi-Adad I. Just years later, the city then enjoyed a brief but prosperous period as an independent kingdom, which was promptly destroyed by the Turukkaeans of the Zagros Mountains in the north.

“Mardaman certainly rose to be an influential city and a regional kingdom, based on its position on the trade routes between Mesopotamia, Anatolia and Syria,” added Professor Pfälzner. “At times it was an adversary of the great Mesopotamian powers. So the University of Tübingen’s future excavations in Bassetki are sure to yield many more exciting discoveries.”

Everything You Can Watch On Disney+ When It Launches In November! – Perez Hilton

When Your Bananas Go Brown Don’t Throw Them Out! Do This With Them Instead.