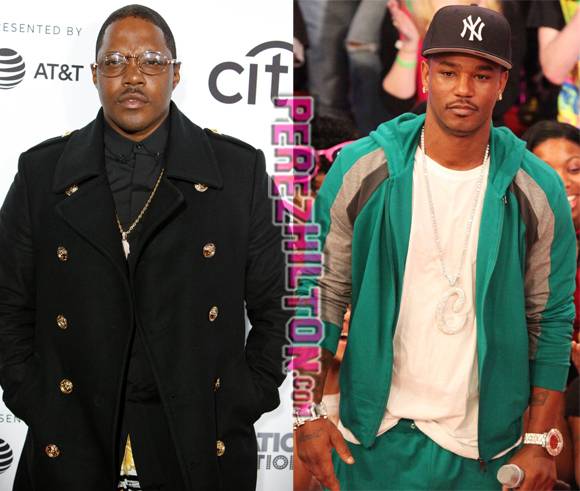 Nothing quite like releasing a late 90s diss track all the way out here in 2017… but this is where we’re at in an apparently ongoing beef between Ma$e and Cam’Ron!!

On Friday morning, Ma$e (pictured above, left) released The Oracle – a project that has him out of hiding and taking direct shots at Cam’Ron, another Harlem rapper who’s apparently now a foe!!

The pair goes back to their early middle school days in the early 90s in Harlem, but it’s not all love any more.

And almost out of nowhere The Oracle paints a picture of Cam’Ron being shady and… uh… doing WHAT to his own sister????

Ch-ch-check out the diss track itself (and the reactions to it) right here:

Twitter wasn’t having it this morning, and users went off on the random renewal of this ages-old beef between old rappers (below):

This Mase & Cam beef gotta be exactly how Harlem felt when they had to choose between Malcolm & Farrakhan. This one prolly worst tbh.
— Tukach Shakur 🇳🇬 (@its_kachi) November 24, 2017

Damn Mase waited 20 years to show he could go in like that?! Wtf
— Peter Rosenberg (@Rosenbergradio) November 24, 2017

Mase killed Cam. Best part about rap beefs is discussing it with your homeboys but I’m not sending out any texts about a Mase-Cam battle in the year of our Lord 2017
— Beyonce has an uncle named Larry Beyince. Bruh…. (@DragonflyJonez) November 24, 2017

yo i have an essay due in 10 minutes but mase just said cam’ron was drilling his sisters cheeks
— flowcaine (@j_alara) November 24, 2017

First, Cam left JuJu for some watermelon shaped thing. Now he done woke up 98 Mase. Not a good look Cam.
— Dre from the Way (@TheGr8estEver) November 24, 2017

Mase was at the dinner table working on the diss while the turkey was in the oven burning
— Amat Victoria Curamॐ (@BR_Nation) November 24, 2017

Nigga pissed old mase off. That’s not pastor mase or even shiny suit mase on that one. Goddamn.
— Ice (@OfficiallyIce) November 24, 2017

Lmaoooo Mase slammed his hands down after plate 2, slid back from the dinner table and said “go time”
— Barbatos (@FastTimesAtRF) November 24, 2017

Let us know your reactions in the comments (below)!!!

She Sprinkles Cooking Soda All Over The Bed. 30 Minute Later, Something Amazing Happens