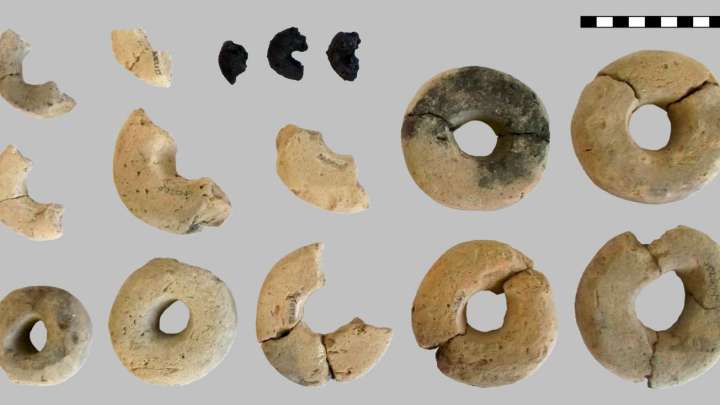 For many, sitting down for a meal is less about what’s on the dinner plate and more about the customs and bonding that come with the experience – a trait that may have defined human food-production and consumption practices for thousands of years.

An excavation of an ancient 23-hectare archaeological site has unearthed a handful of grain-based “Cheerios” that researchers say likely wasn’t made for eating.

Located at the crossroads of two major ancient trade routes, the site of Stillfried an der March in Austria was a central place where large stores of grain and textiles were kept between 900 and 1000 BCE. New research published in PLOS ONE describes the unearthing of three incomplete grain rings found in a pit nearby another containing 14 similar rings made of clay. An electron microscopy analysis of the dough indicates it was made of fine quality flour from barley and wheat, most likely shaped into a circle from a wet cereal mixture and dried without baking – a time-intensive and involved process.

But if it wasn’t meant for eating, why spend the effort?

Cereals were not just a major ingredient in daily meals but may have also served ritualistic purposes. The effort put into the preparation of the doughy rings is different than other foods from the site, meaning they may have served a greater purpose. The researchers note that the 3,000-year-old rings were in good condition, suggesting they were carefully deposited intact on the bottom of the pit and were covered so that damage did not occur. It’s possible the dough rings may have even been made to imitate the clay rings found nearby, which researchers believe could be loom weights.

The authors highlight the cultural importance of “transforming raw ingredients into food” and how deciding on “the choices of plant species, their respective parts to be consumed, and the transformation of those into meals involves their incorporation into the social space of a civilization.”

“Everyday food” provides insight into the production, nutrition value, and the kinds of tools involved. On the other hand, ritual food provide context and apply cultural and societal meaning.

“Each of those meals reflects individual life experiences, collective memory, and identity,” wrote the authors, adding that food-based remains are scarce and it very well may be that some plant-based products go overlooked.