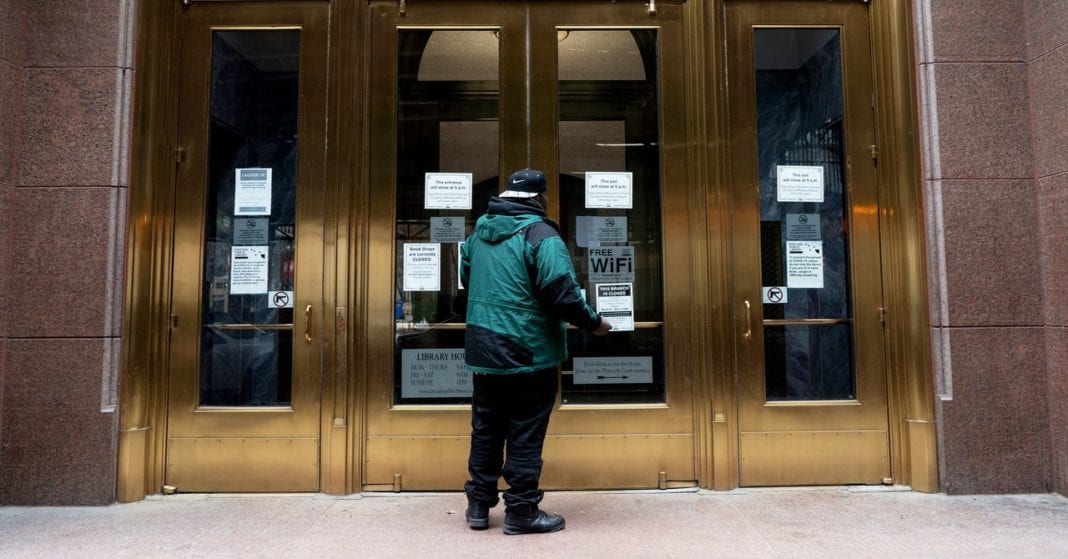 For Jennifer Pearson, the choice was difficult but clear: Shut down the library, or people could die.

“My library was filled with older people,” Pearson says. “I just wanted to go out and scream, ‘Go home. What are you doing here?’ I knew that if we didn't make that move to close the building, they would never stop coming. We were, at that point, doing more harm than good.”

Pearson is the director of the Marshall County Memorial Library in Tennessee, which shut down last Wednesday. She’s also president of the Association for Rural and Small Libraries. The ARSL, along with larger organizations like the American Library Association, has issued a statement recommending that public libraries close their doors amid the Covid-19 pandemic.

The Library of Congress helped lead the charge earlier this month, announcing that it would close all its facilities to the public until April and suspend library-sponsored programs until mid-May. Soon after, public library systems in major cities like New York, San Francisco, and Seattle closed as well. To date, more than 3,000 libraries across the country have followed suit.

Read all of our coronavirus coverage here.

The buildings won’t all just sit empty. In San Francisco, for instance, libraries and other public facilities have been repurposed as “emergency care facilities for children of parents on the front lines of the COVID-19 outbreak and low-income families,” according to a press release from the office of San Francisco mayor London Breed. But, as with every societal disruption wrought by the coronavirus, the closure of libraries can create ripple effects through the communities around them.

“Shutting down libraries has a tremendous impact on the communities that we serve,” says Ramiro Salazar, president of the Public Library Association and director of San Antonio Public Library. “Until they’re closed, sometimes folks don't realize how important libraries are to them.”

“Libraries are one of the few places that anybody can go to without the expectation of having to buy something,” says Darcy Brixey, a Seattle-based library manager who has worked in public and academic libraries for 20 years. She adds, “It’s the very basic thing of being able to go somewhere that you can use the bathroom, or being able to go somewhere and just be warm and dry. That’s called loitering in every other business except a public library.”

Libraries have long served as unofficial day shelters for people experiencing homelessness or housing instability. An especially vulnerable group in the best of times, the homeless face vanishing resources during a global public health crisis. California governor Gavin Newsom said he expects that 60,000 homeless people in California alone could become infected with the coronavirus. The issue is especially acute in smaller towns, where the shelter provided by a library can already be a last resort as it is.

“We don't have a homeless shelter, we don't have other places where they can just be during the day,” Pearson says. “Those people are on their own, and that’s a shame. It breaks my heart, but I don’t know what we can do for them right now.”

Libraries also serve as a lifeline for low-income families. They loan out far more than just books, Brixey says—baking materials, power tools, and general supplies that the more well off may take for granted. Libraries provide social resources for disadvantaged children or seniors, not to mention internet access in rural communities or for those who can’t afford it.

“I think it’s going to daylight a lot more of the equity issues that we have in this country,” Brixey says. “People are going to start seeing people that they never saw before … It’s going to seem small at first, but as the weeks go by, it’s going to become obvious."

It’s not quite all doom and gloom for library patrons. While physical branches may have shut down, many libraries still offer a wealth of digital content for those who have internet access elsewhere. Card holders can take advantage of ebook loans and streaming programs offered by their local libraries.

In general, libraries have also become much more forgiving about item return dates and library card expirations. Some libraries have started offering even more robust online offerings, from upping the allotment of streaming media rentals to hosting online reading sessions. On March 24, the Internet Archive announced it was creating a "National Emergency Library" by suspending wait lists for the 1.4 million books in its digital lending library. The organization says the suspension will remain in place until June 30, or the end of the US national emergency, whichever is later.

“We cannot create a sense of normalcy for them,” Salazar says. “But we can use this new reality to offer something different. That’s what we’re working on. Many of us are challenged, but we’re coming up with good, creative ideas.”

While libraries have struggled during their time in suspended animation, more hardships may come after the coronavirus pandemic runs its course. At this point, an economic recession appears all but inevitable. During economic downturns, library patronage surges, as millions more people are drawn by free and low-cost resources, job-seeking programs chief among them. According to a 2010 report by the ALA, libraries in 24 states had their funding slashed during the recession of the late 2000s. Combine a surplus of increasingly desperate people with an underfunded library staff and things can get ugly.

“We’re probably going to lose staff and lose programming all at a time when people need us the most,” Pearson says. “We’re the helpers during a recession. It’s going to be tough for us to do that, because we’re going to be faced with either flat budgets or declining budgets, because our funders won’t have the money to fund us the way they do in the good economic times.”

The hope among library advocates is that the coronavirus closures will spark more awareness of the services the brick-and-mortar institutions offer. A “don’t know what you’ve got until it’s gone” type situation, perhaps, that could generate more public support for libraries moving forward.

“At some point a library is going to save your ass,” Brixey says. “As long as you keep a library central to your life, you will always see how relevant it can be.”

Updated 3-25-2020 11:35 am EDT: This story was updated with information about the Internet Archive's new National Emergency Library.

WIRED is providing unlimited free access to stories about the coronavirus pandemic. Sign up for our Coronavirus Update to get the latest in your inbox.

More From WIRED on Covid-19

‘My sister turned out to be my mum’

How did Ellen become one of the biggest villains of 2020? | Arwa Mahdawi