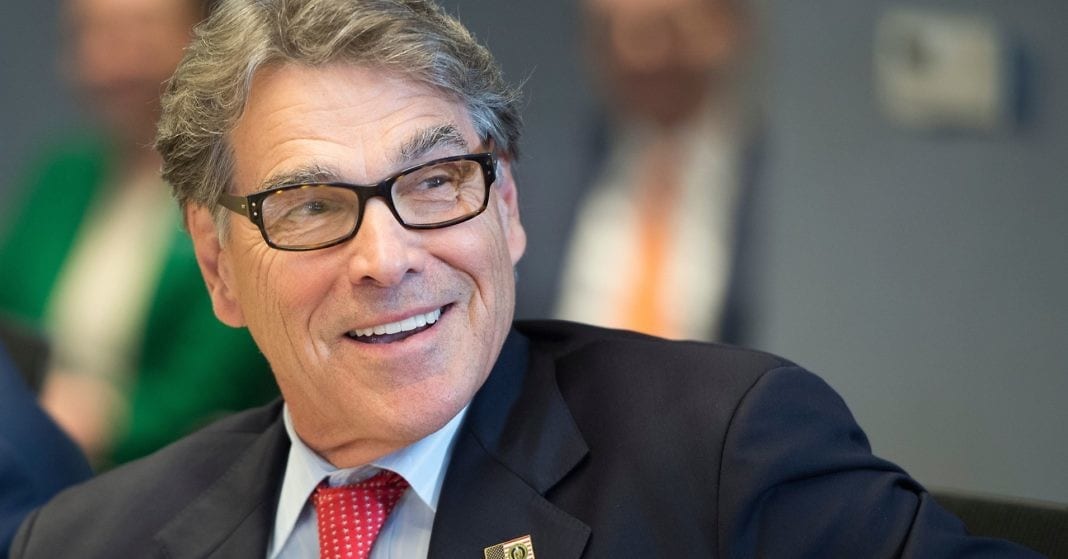 Rick Perry gets a lot of nice stuff. Back when he served as the governor of Texas, he received 22 pairs of cowboy boots, Stetson hats and belt buckles. He even got a TV.

During his first nine months as the secretary of the Department of Energy, Perry accepted more than 100 gifts. Dozens of books. A lapel pin stating “Trump will change US.” Energy Department-branded T-shirts.

The Saudi energy minister brought Perry a commemorative plaque. His Kazakh equivalent offered a green velveteen coat with a black mink collar. India’s minister of petroleum and natural gas presented a silver filigree peacock statuary in a Plexiglas box, which Perry displayed in his office.

Sure, that’s how foreign dignitaries make nice. But the gifts below ― revealed in records released under the Freedom of Information Act and reviewed by HuffPost ― are truly bizarre:

A DVD That Prophesizes ‘Another Jewish Holocaust’

Texas preacher Irvin Baxter, the founder and president of End Time Ministries, gave Perry a DVD copy of “America’s God-Given Destiny,” a recording of his teachings on Armageddon.

In the film, Baxter, a long-time televangelist and self-proclaimed “international prophecy teacher,” predicts “there is another Jewish Holocaust coming” but that “all Jews who heed the warning of the prophecies will escape.” He prophesizes that Europe will become “the future power base of the Antichrist,” but says the “nations of Jordan and Israel will never be controlled by the Antichrist,” in part because “the U.S. will protect Israel from attack.”

“This lets us know that the U.S. will be opposed to the Antichrist during the time called the Great Tribulation,” he says. “This is wonderful news!”

A Children’s Book On Particle Physics

Four days after Perry took charge of an agency he once vowed to abolish, a “science-loving National Laboratory employee” (whose name is not revealed) gave him a softcover copy of The ABCs of Particle Physics, an illustrated book published by Symmetry Magazine with funding from the Department of Energy.

An individual whose name was redacted and company listed as unknown gave Perry a hardcover copy of Dr. Seuss’s The Lorax, the urgent tale of a mustachioed environmentalist creature who speaks for the trees when greedy industrialists chop them down.

A person whose name was redacted and whose company was listed as unknown presented Perry with a box of black cotton Bresciani socks last September.

In July, Laura Starks, the chief executive of the Texas-based energy consultancy Starks Energy Economics, gifted Perry a copy of The Moral Case for Fossil Fuels, a 2014 book by Alex Epstein, a self-described philosopher who boasts about debating environmentalists and being hired by to give talks to big oil and gas companies’ employees.

In October, Gregory Wrightstone, a geologist who made a name for himself in right-wing media refuting climate science, gave Perry a copy of his book Inconvenient Facts ― The Science That Al Gore Doesn’t Want You To Know.

Author Kenneth Gray gave Perry eight copies of his 2002 book The Rock That Burns, a “political novel designed to inform readers of unknown or ignored facts regarding the potential of U.S. oil shale resources.

The plot is described on Amazon like this: “The negative impacts of no-growth environmentalists, the Bureau of Land Management, and the giant oil company consortiums on development of these resources is depicted through fictional characters. The Rock That Burns is the story of an economics professor, a journalist, a preacher, and an Air Force pilot who oppose U.S. energy policy for different reasons and are caught in a web of international intrigue.”

Environmental Protection Agency Administrator Scott Pruitt isn’t the only Cabinet member with his name on a hard hat. In October, National Mining Association Chairman Kevin Crutchfield gave Perry a white, plastic “Comfo-Cap” with his name in blue letters. The hard hat is valued at $65. That same day, Perry addressed members of the association at a breakfast sponsored by Japanese conglomerate Komatsu Mining Corp. at the Trump International Hotel in Washington.

A Portrait Of Himself

In November, the Federation of Asian-American Voters gave Perry a portrait of himself on canvas. He put the painting in a vault.

A Bill Clinton-Themed Adaptation of ‘Macbeth’

Two weeks before Christmas, Sam Griffith, a former justice on the Texas 12th Court of Appeals who became a preacher, presented Perry with a copy of his book MacClinton, an adaptation of William Shakespeare’s “Macbeth” billed as “the tragedy of the Clintons.”

The cover of the play shows a red-nosed Bill Clinton wearing a gold crown and a red robe, smoking a cigar and looking mischievously at a similarly clothed Hillary Clinton, who is angrily pointing at a blue dress suit she’s holding on a hanger. The first scene opens in the “lingerie aisle of a department store” and features “three *itches, who are obviously peroxide blondes with high, bouffant hairdos and large, silicone-enhanced chests, wearing lots of make-up and tight stretch clothes.”

If you think Gen Z is entitled and lazy, you haven’t met these four...