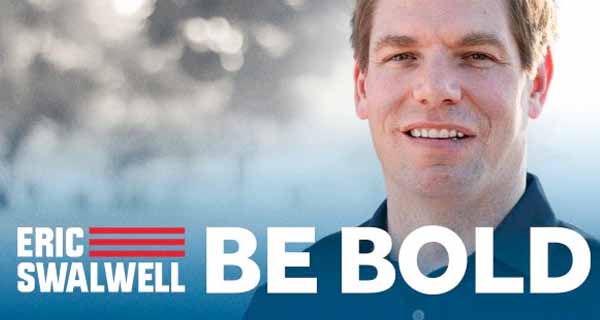 Joe Biden and Bernie Sanders, the top-two polling Democrats in the 2020 race, we expected to dominate Thursday night’s debate, but Kamala Harris laid into Biden over his segregationist past, and Eric Swalwell — who somehow managed to earn a space on the same stage — could do no better than to praise Biden but urge him to “pass the torch.”

In other words, everyone who wants to vote for Biden should vote for me, ’cause I’m practically the same but not too old. Biden won’t even last the 11-and-a-half years we have left until climate change kills us all.

If Swalwell wants to take on the frontrunner this way, we’re not going to stop him; it’s not like he could embarrass himself further in this campaign.

This is not going to get you elected, Mr. Swalwell!

I like you but you were very disrespectful in the debates tonight. A real turn off.

Not a good look… I’ve heard enough disrespectful rhetoric from the current clown show in the WH in the past few years to last a lifetime.. sure didn’t expect that from you, Sir.

You’re not going to win the nom by degrading Joe. Do better, Eric.

Eric, I like you but age harassment is not cool……knock it off.

As a nurse who works for Medicaid, @ericswalwell, I resent your comments about insurance companies. Also, earn your keep before you try to take down an exemplary man like @JoeBiden.

I really thought of you as a rising star. No more. Shame on you.

Dang, and he’d just introduced us to his first (and perhaps only) supporter, and now he’s lost even that.

@ericswalwell – look at it this way, you’re as close to the center of the action as Marianne Williamson. Let that sink in.

I had great hopes for you

But you need more time baking in the oven son, you are still too doughy in the center

Pass the torch to such a rude green twig?

Nah I’ll just pass you by

In most cultures
Elders are revered & sought out for their wisdom

Then get your own poll numbers up! Young guy like you should be able to beat out 2 old guys, right??

You don’t approve of racism do you? Well, ageism is not acceptable either. Your lack of respect to one who was VP for 8 yrs floored me. There are better ways to make yourself heard.

Age discrimination is apparently something you feel is alright to do. I am so disappointed in the Dems who think a person stops thinking or able to contribute to society bc they are over whatever age you call too old.

You need a more compelling call to action than “vote for me, I’m young.”#Ageism

I’m unfollowing you as of NOW. I have student loans debt but I would never speak to anyone the way you spoke to @JoeBiden . You are not the candidate I thought you were. I wanted you to run for President but not anymore.

I will say this once. I used to follow and admire @ericswalwell – but no more. This line of attack is cruel and unnecessary. Unfollowing now.

This is appalling. Sit down.

Hey congressman Ken Doll, drop out so that we can hear what the real candidates have to say.

You haven’t earned your stripes yet, sir, but Vice President Biden has, and he gracefully stepped aside while @HillaryClinton ran in 2016. You, however, have shown one stripe on your sleeve, and it’s called #Ageism

Or maybe the low-polling candidates should drop out and stop kneecapping our popular candidates . See how it works now? Everyone who wants to run should run.

Looks like Swalwell just managed to drop his own approval to somewhere below 0 percent. Good work.

‘Taking it up a notch’! Eric Swalwell says he’s a better choice than Biden because ‘I’ll have to live with the decisions that I make’ https://t.co/ZUGJmKioaZ

Her House Always Smells AMAZING And People Dont Know Why. THIS Is Her Secret!