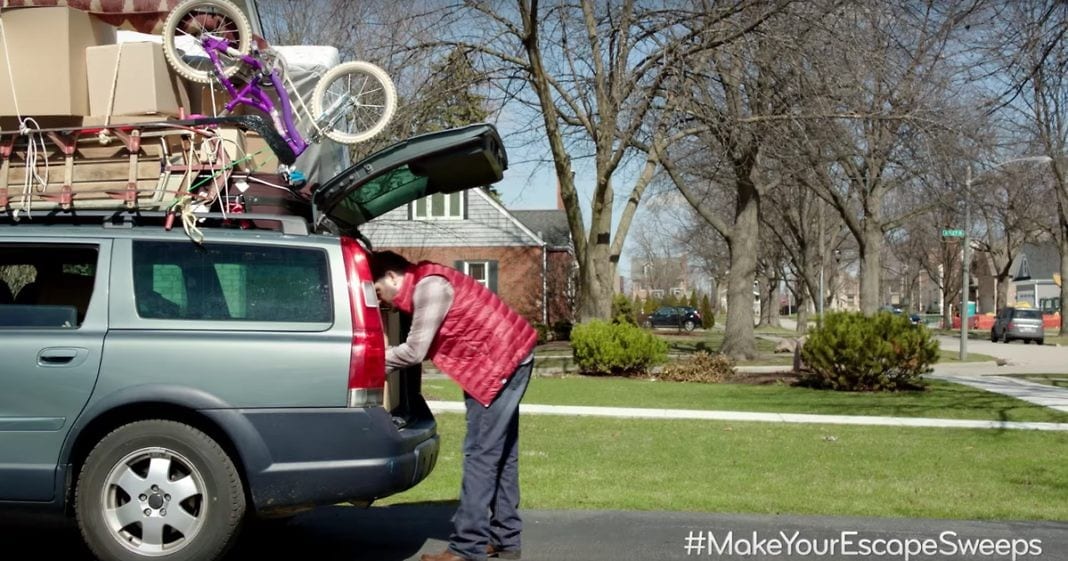 Esurance is holding a $10,000 sweepstakes for Americans to leave the country.
Image: esurance/screenshot

At some point in the coming weeks, one American will travel to a foreign country of his or her choosing with the ostensible mission of scouting out a future home all on Esurance’s dime.

The insurer is hoping its somewhat tongue-in-cheek sweepstakes will resonate with a country forced to choose between two historically unfavorable aspiring heads of state in a contest marked with unprecedented hostility.

It’s not the only advertiser looking to channel voter malaise. Tasked with creating messages that speak to the zeitgeist of the times, several brands are theming ads around this year’s presidential election whether agnostically tweaking the political circus, attempting to bridge aisles with a shared sense of disgust or even taking sides on particular issues.

SEE ALSO: The internet has made advertising weirder than ever

“This election has become a bit of a show,” said Mimi Chakravorti, a senior strategy director at branding firm Landor. “It’s become less and less about who’s talking about what policy and more and more about brands attacking brands, building brands, taking down brands.”

That shift has opened a door for certain advertisers to wade into politics in a broad, emotional way, Chakravorti says even at the risk of turning off some potential customers.

A couple major beer brands, for instance, have ventured outside their usual domain of football, sex appeal and bar parties to drive substantive political discussions.

Comedians Amy Schumer and Seth Rogen, heading up Bud Light’s mock-presidential ticket, have taken some surprisingly nuanced stances on issues like gender identity and marriage equality on the brand’s behalf.

“We have a bold brand personality, but were also very conscious of needing to strike the right tone,” says Bjorn Trowery, a spokesman for Tecate’s parent, Heineken. “A campaign like this will create a bit of tension and thats not necessarily a bad thing.”

Trowery says the ad marks the first time the brewery had ever taken a political stand on immigration, and social media reaction to the commercial was nearly 90% positive.

“This was our Super Bowl,” he says.

Outside of the alcoholic beverage world, Spotify offered up an anthem for a move to Canada; JetBlue called on a plane-full of passengers to “reach across the aisle” and unanimously agree on a free trip destination; camera company 360fly’s off-color satire of a hypothetical Trump administration earned a ban from three of the four major broadcast networks.

Esurance’s “election insurance” campaign started off as an April Fools’ joke inspired by a surge in Google searches related to expatriating to Canada. But as the election cycle marched forth in a state of unrelenting lunacy, the company decided it was worth reprising.

“The tricky part is keeping that light-hearted tonality,” said Brian Shembeda, an executive creative director at Leo Burnett, the agency behind the ads. “The more emotion around the subject, the trickier it gets. You have to be careful.”

The safest of the bunch are the brands parodying the generic electoral process while offering zero specifics that might be seen as a comment on this particular election.

Just how bold a brand is willing to go depends mostly on market research calculus, Chakravorti says, but mass appeal sometimes comes at the expense of a deeper connection with a narrower set of people.

“If you’re everything to everyone, you’re also nothing to no one,” she said. “You need to understand what your voice will be.”

Despite easy potshots at the GOP’s reality star leader, brands generally aren’t looking to explicitly endorse one candidate or another. Instead, they try to walk a careful line with positive and inclusive messages that dodge the more divisive mud-slinging currently dominating party politics.

Sometimes, even the most anodyne attempts at this can go awry.

Twitter users slammed baking mix maker Bisquick last Sunday when it offered to field political questions during a debate shaded by serious discussion over a candidate seemingly bragging about sexual assault. The playful intent the brand tried to frame the event as “#PancakesVsWaffles” struck some as tone-deaf.

We’re answering your questions LIVE tonight during the debate! Tweet @Bisquick or #PancakesvsWaffles to chat. pic.twitter.com/chbXkYWh1Y

Such snafus are an occupational hazard for even the most well-meaning social media managers, who are charged with keeping their employer’s brand in the mix of sometimes sensitive cultural conversations.

While brands no doubt feel safer weighing in on an election that seems to pit the “normal versus the abnormal” as Vox’s Ezra Klein put it rather than a contest of equally respected career politicians, their willingness to do so also speaks to a larger change in consumer attitudes.

Social media has made corporations a constant presence in their customers’ online lives, and, as such, they’re now expected to regularly comment on the newsworthy happenings of the day with their own singular voice.

The result is that many consumers particularly millennials increasingly seek out brands with a social worldview with which they identify, according to market research.

“Brand managers certainly think about having a relationship with consumers as moving beyond just, ‘Here’s something in the marketplace that has these characteristics. Hope you like them,'” said Anne McGill, a University of Chicago business professor who studies brand anthropomorphism, in an earlier interview. “They want repeat purchases, and that often entails an emotional connection.”

Businesses that understand this mindset have grown more comfortable sticking their necks out on social issues.

When Indiana Gov. Mike Pence Trump’s running mate signed into law a bill that would have permitted businesses to more easily discriminate against gay and lesbian customers, it prompted boycott threats from several major companies, eventually leading to a reversal.

A North Carolina law that bars transgender people from using the public restrooms that correspond with their gender identity drew similar condemnations from Target, General Electric, Pepsi and many other giant corporations though the result was less successful.

On a much smaller scale, many brands have been tweeting along with key points in the election, poking fun at Trump’s gaffes along with the rest of the Twitterati. Or, in the case of Tic Tac and Skittles, they’ve been reluctantly yanked into the headlines and opted to bow out.

“As we move forward I think we’re going to see more and more brands taking part in these conversations that are happening whether it’s actively taking a side or just being a part of it,” Shembeda said.

An interesting view on #Trump‘s immigration stance. What do you think? https://t.co/eV091jQ1Ax

While most brands aren’t likely to start punctuating tweets with exclamatory insult bursts (“Sad!“) anytime soon, many have begun to understand the kind of cautiously line-toeing commentary that grabs attention.

Of course, brands are not your friends, and any political contention they do have is likely based on cold, hard numbers.

But that doesn’t mean they can’t make a difference.

Heatwaves Across The Northern Hemisphere Signal A Worrying Trend

‘Ireland is becoming no place for the young… we need brave people willing to be...