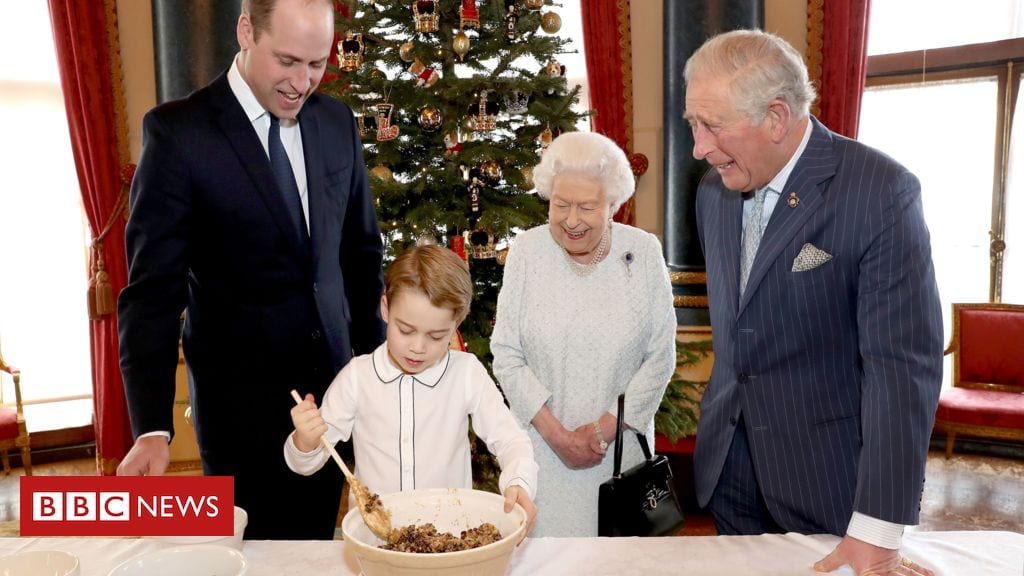 Buckingham Palace has released two pictures of the Queen and other senior royals making Christmas puddings for charity.

Here are five things we noticed about the festive photos.

Four generations of royals – the Queen and the next three heirs to the throne, princes Charles, William and George – were photographed in the palace’s music room.

In the background is an impressive Christmas tree

Look closely and you will see it’s adorned with a number of regal-themed baubles, including mini crowns, corgis, a golden throne and a piper wearing a kilt.

Sadly, we can’t see what’s on top of the tree.

This is not the only tree the royals have at Christmas. Traditionally, the family spend Christmas at the Queen’s private estate Sandringham and they meet there on Christmas Eve to finish decorating their 20ft tree.

It’s fair to say the four generations of royals are not wearing the usual baking attire.

All four are smartly dressed, with Prince William and his father, Charles, both wearing suits and ties.

The Queen, meanwhile, is wearing a formal dress, as well as a string of pearls and a brooch.

It’s worth bearing in mind that the dress code for a royal Christmas is quite formal anyway.

Royal historian Kate Williams previously told the BBC: “There are quite a lot of different dresses required – change for church, change for dinner.”

3. The Queen’s got her handbag

The Queen is rarely seen without a handbag on her arm and, if this photo is anything to go by, the same might even be true in her own palace.

She appears to be carrying a favourite of hers, a Launer London Traviata which is handmade at a factory in Walsall and costs around £1,800.

Launer London was granted the Royal Warrant in 1968 and has been supplying Her Majesty with bags ever since.

What’s inside her bag remains for only the Queen to know.

If the mixing bowl in the photo looks familiar, then maybe it is.

Many consider the Mason Cash bowl to be a classic in the UK, used in kitchens for decades by their parents and grandparents – and even features in the Great British Bake Off.

5. A bit late for Christmas pudding

We don’t know exactly when the pictures were taken, except that it was sometime earlier this month.

It must have been before Friday, when the Queen left for Sandringham, which was also when Prince Philip was admitted to hospital.

Traditionally, the Christmas pudding is made on Stir-up Sunday – usually the last Sunday before Advent, in order to boost the flavour. This year that was 24 November.

It would then be wrapped up in a cloth – or nowadays in cling film or foil – and stored in a cool, dry place until Christmas Day.

Some people add coins or other items to the mixture for luck – a tradition started by Queen Victoria, apparently as a gesture of thanks to her cook – while in other families people take turns to stir it while making a wish.

We don’t know what recipe the royals used, but some – such as Delia Smith’s – allow you to leave the baking until Christmas Eve.

Fortunately in this case, the puddings will not be eaten until 2020.

The ones made with the royals’ help were for the Royal British Legion’s new Together at Christmas scheme, and will be among 99 puddings distributed to different projects linked to the armed forces next year.

“As we head towards our centenary in 2021, we are proud to start a new tradition for our community with the support of our patron, Her Majesty the Queen, and three generations of her family,” the charity said.

“Making and eating Christmas puddings has traditionally been a shared family activity, and we look forward to sharing these special puddings made with the help of the royal family.”

Aside from the charity’s scheme, it’s tradition for the Queen to gift each of her 1,500 staff a Christmas pudding along with a card.

They’re not homemade though, and this year the puddings are reportedly being bought at Tesco.

Neiman Marcus Sells The Most Bougie Tamales You’ve Ever Seen

21 Epic Baking Hacks That You Need To Start Using TODAY!

Here’s Why You Always Get The Urge To Poop Whenever You Go For A...