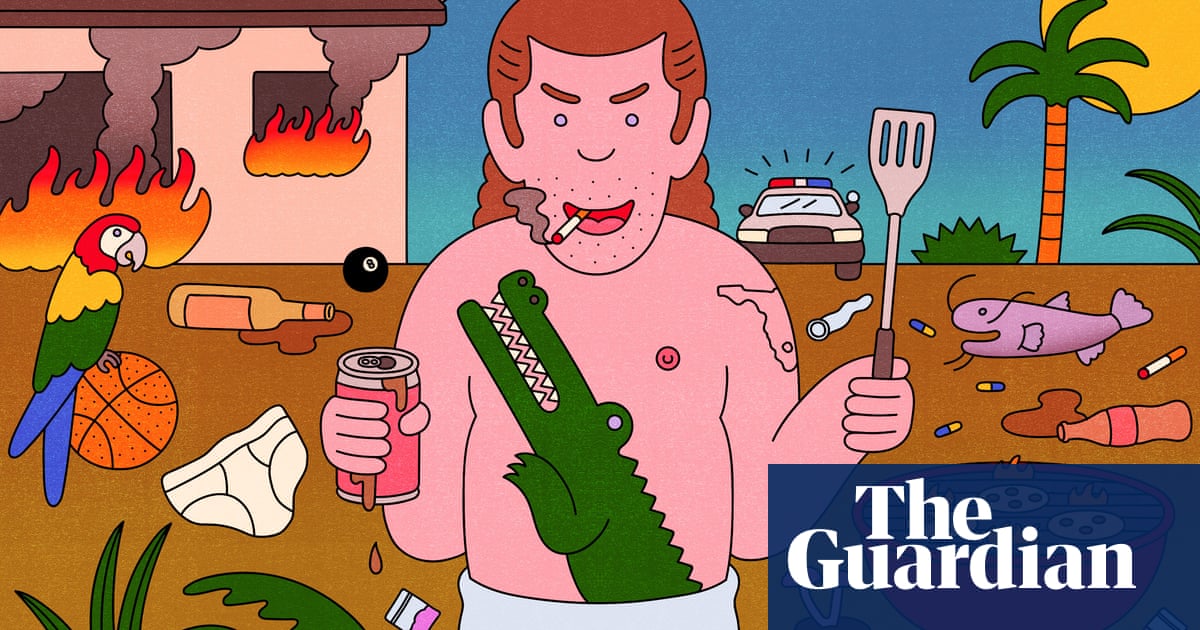 It is one of the nation’s favorite jokes – with an entire state as the punchline. And at its center stands Florida Man, the mythical yet mercurial figure whose bizarre real-world antics have come to personify the perceived craziness of life in the Sunshine State.

Briefly, back in the spring, Florida Man became a global social media phenomenon. Internet users were encouraged to Google the phrase along with their birth date to see just what shenanigans involving nakedness, alcohol, exotic wild animals, or sometimes all three, Florida Man had got up to on their special day.

Millions around the world were enthralled to discover tales of drunken Florida citizens crashing their lawnmowers into police cars, pulling alligators from their yoga pants during routine traffic stops or setting fire to their houses while trying to barbecue cookies in the nude.

But if the Florida Man challenge has faded from the collective psyche, Florida Man as a newsmaker clearly has not. Already this week he has picked a fight with a tree, dumped live catfish on a woman’s lawn while posing as an FBI agent and been arrested for shooting hoops in a public park in the buff.

And only last month the Easter Bunny was caught brawling on a sidewalk in Orlando.

Little wonder, perhaps, that some are attempting to monetize the concept by trademarking the term Florida Man and selling T-shirts and coffee mugs, and a cable network is pressing ahead with plans to give the state’s most dysfunctional superhero his own primetime TV show.

Florida Man, Pittman says: “could be anyone from the 21 million people in Florida, male or female. It’s become this all-encompassing stereotype of a bungling, often inebriated person and doing something ridiculous or clearly insane, and the very least incongruous.

“You can trace it back to the 2000 election recount. Until then we didn’t have that kind of reputation, then the three weeks we spent trying to figure out who the president was going to be based on people squinting at little hanging chads in Palm Beach county convinced people that maybe the folks in Florida are not as bright as we thought.”

From then, Florida’s reputation as the weirdest, wildest, wackiest state was secure. In 2001, the news aggregation site fark.com gave the state its own topic tagline. Twitter’s @_floridaman handle launched in 2013 and is closing in on half a million followers.

Late-night TV comedians have also rallied to the cause, with Trevor Noah’s Daily Show airing a tongue-in-cheek investigation into the causes of the Florida Man notion. Yet, although satirical, the Daily Show suggested that Florida’s broad open records laws were responsible for more media coverage of eye-catching stories than would be possible in other states.

It also touched on darker themes common to many Florida Man stories, notably poverty and social deprivation, substance abuse and domestic and sexual violence, and questioned the legitimacy of poking fun at society’s less privileged.

“You have to remember these are real people with real lives, not folks stumbling around on Saturday Night Live to be funny,” Pittman said.

“Often in Florida tragedy wears the mask of comedy. You’re not just reading the police log, you’re seeing the result of Florida consistently being ranked 49th in spending on mental health.

“The stories involve homeless people, domestic violence … is that funny, a guy assaulting his wife? No, not even when someone’s using an odd weapon, ‘man assaults wife with taco’ or something like that.”

While Florida is not a poor state overall, it is fifth in income inequality, according to a 2018 study, with most of its wealth concentrated in the south. Rural counties, particularly in central Florida and the Panhandle, are traditionally much poorer, and produce a disproportionately high number of Florida Man stories, a sample geographical study by the Guardian found.

“I always think about how diverse our state is and in some areas it takes a lot of money to go a little bit, and in other parts of Florida that’s less true,” said Deana Rohlinger, professor of sociology at Florida State University.

“Poverty in north Florida might look different than in the south. I was interested in that [as a factor] and drugs and alcohol, and mental health, which is an issue all across the US.

“That’s where, as a sociologist, I really think about the diversity of the state, the economy and mythology.”

The natural environment also plays a role. From the Florida Everglades packed with alligators and pythons to bears, panthers and other wild animals encroaching into urban areas, nature has always played a role in Florida Man stories.

“One of my favorites was when we had a cold snap and all the iguanas tended to freeze up in the trees and fall out,” Pittman said. “And so this guy’s traveling along, sees about 40 of them on the side of the road and thinks ‘hey, this is great, I’ll take ’em home and cook ’em’.

“So he gathers them up, puts them in his car and starts driving. Then they woke up and started running around in the car. He ended up crashing.”

With studies showing rising seas threatening to engulf Florida by the end of the century, some fear that Florida Man’s days could be numbered. Pittman, however, is unconcerned.

“It’ll just drive us further inland until we’re all standing in one spot in Orlando waving our machetes,” he said.

Gym Rats Are at Risk of This Once-Obscure Kidney Injury

The sky’s the limit for these women who are baking bread. And now the...