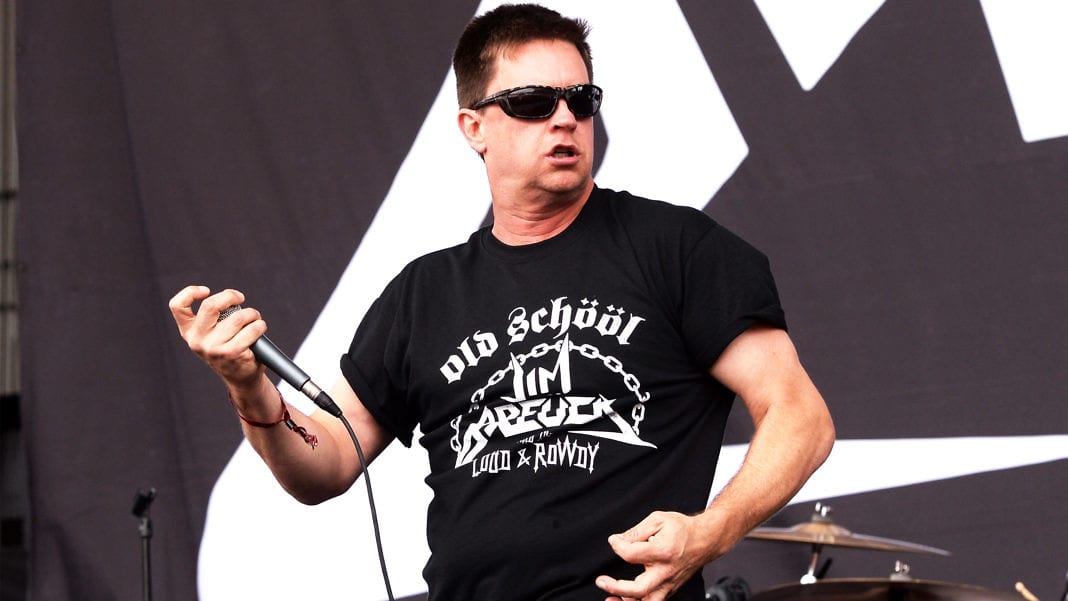 It's early September, and Jim Breuer, the former Saturday Night Live and current Kevin Can Wait star, is killing time inside his suite at the South Point Hotel and Casino in Las Vegas. It’s a big room for one guest, with a retro vibe and a massive conference room table overlooking a view of Nevada’s desert sprawl. Breuer isn’t seated at the table, however, as he's watching a marathon of Bravo's Below Deck, a reality show about the very tanned crew members on a chartered mega-yacht. It's his favorite show.

As he watches, Hurricane Irma, currently in full swing, pummels some of the show's past locations. Breuer's daughter attends college in Florida, where a state of emergency has been declared, and he keeps his cell phone nearby, periodically calling to check in and discuss her pending evacuation.

Downstairs, his image is visible throughout the hotel’s casino floor on various marketing parcels, decorating slot machines and elevator walls. He’s in town for a three night gig at the South Point Showroom, “An Evening with Jim Breuer.” But the comedian—recognized on Comedy Central’s list for “100 Greatest Stand-ups of All Time”—is not performing a traditional set tonight.

Breuer’s known for his storytelling in his act and being, in his words, “the people’s comic, the everyday comic, the relatable guy.” (This was confirmed during a recent gig at the Wilbur Theater in Boston, where he improvised a 15-minute bit on, among other things, Aaron Judge and Louis CK’s sexual misconduct.) But Breuer has also nursed a long passion for music, performing with a band during the early days of his stand-up. Last year, he put out Jim Breuer and the Loud & Rowdy—Songs from the Garage, a heavy metal record released by Metal Blade Records and featuring a guest appearance from AC/DC’s Brian Johnson. Now, he’s incorporating his suburban dad rock star fantasy persona even more explicitly into his work.

Think a metal version of the Blues Brothers.

Still game to riff about his role in Dave Chappelle’s stoner classic, Half Baked as well as his SNL signature character, Goat Boy (“I had no clue that’d be my ‘Stairway to Heaven’”), Breuer is well aware that any potential career lane shift carries a degree of risk. “I didn’t want to put something out there like ‘what, is he trying to solve the world’s problems? Are you the music guy now?’ That’s the immediate reaction.”

Hence, tonight’s show—a side project hybrid, similar but different from the Jim Breuer who might appear on Howard Stern or Opie & Anthony.

Like his stand-up, the Vegas shows are consistently and deeply funny, a logical extension of his comedy routine: storytelling complemented by humorous songs on topics such as dealing with rebellious kids (“Raising Teenage Girls”) and texting his wife (“Thrash”), laced with a hard rock edge. And, crucially, the music feels right, crafted by a true student of the genre.

“I always felt it was an inside club, when you were into that hard rock and ’80s metal. It gives me a drive and energy, to this day, with comedy and parenting,” said Breuer. “Pop culture saw it as devilish—it’s dark, it’s aggressive. I found that [it] was more thought-provoking than any other music.”

Song influences he cites include “Electric Eye” by Judas Priest (it’s about “big brother or government watching…the machines eventually taking over”), “Peace Sells” by Megadeath (“I loved questioning pop culture’s way of judging and labelling”) and “Leper Messiah” by Metallica (“I thought a lot about faith and organized religion… I still listen to Metallica like it’s my church.”) In conversation or onstage, he speaks with a good-humored reverence about meeting early idols, such as Ozzy Osbourne or James Hetfield.

In a world preoccupied with nostalgia, Breuer’s homage to the beloved soundtrack of his youth has added poignancy in today’s music landscape. The recent death of Malcolm Young, guitarist and co-founder of AC/DC, highlights an increasing sense that pop culture is losing a legacy of music not being perpetuated by rock’s more recent iterations.

Like Aykroyd and Belushi before him, it may be up to Breuer to preserve a slipping genre’s place in the zeitgeist.

“Pop culture saw it as devilish—it’s dark, it’s aggressive. I found that [it] was more thought-provoking than any other music”
— Jim Breuer on heavy metal music

The first time the Blues Brothers performed live, it was at an afterparty for Saturday Night Live. The musical guest was Willie Nelson, with Aykroyd and Belushi joining him and his band at the Lone Star Cafe to riff a few late night blues covers, including “Flip, Flop and Fly.” The genesis for the act was borne during a conversation at Aykroyd’s Toronto speakeasy, and cultivated as Belushi’s love for the blues deepened. Soon, riding Belushi’s success from Animal House, it became a sensation.

What Breuer is doing is trickier.

On March 7, 1998, he appeared on SNL’s Weekend Update segment to debut Gunner Olsen, singing the Heavy Metal News. “That was my alter ego, I loved his look,” says Breuer. “Unfortunately, that was the last year for me. I think I did Gunner twice. He immediately got great traction, but he never got a chance to grow.”

The one-man show presents a fresh opportunity: “This show is: my family’s not home, I come out of my garage and I’m going to tell you my whole life story. Now the end game, we’re not 100 percent there… [but] when the music kicks in, I want to introduce Gunner, or the character, and that would be the song part. As soon as the song’s over, I’d be back to reality in the garage.”

A few characters from the SNL universe have gone onto later, non-show-related success. Billy Crystal initially portrayed Buddy Young, his protagonist in Mr. Saturday Night, during a 1985 Update sketch. Christopher Guest, Harry Shearer and Michael McKean performed as The Folksmen years before their big screen appearance in A Mighty Wind. Milton—the put-upon, possibly psychotic cubicle drone in Office Space—started off as a character in Mike Judge’s SNL cartoon shorts.

Which is to say: Breuer is in unique company. And, fittingly, Joliet Jake himself was a metalhead and hard rock fan before and after his stint as a soul music frontman. (Belushi’s final appearance on Saturday Night Live came during the infamous 1981 hardcore performance by the band Fear, an act he lobbied to book.)

For Breuer—who has recently announced a residency at the Paramount in New York that will include a musical element—that level of ingenuity complements his blend of relatability and rock and roll ethos nicely.

“Anyone who sees the show comes out and says: ‘That was amazing. I’m not even sure of what I just saw.’ That’s the reaction I’m looking for.”

15 Beauty Tips That Will Make Your Routine Easier, Faster, And Less Expensive

Tinder now lets you swipe right for the presidential candidate of your dreams.