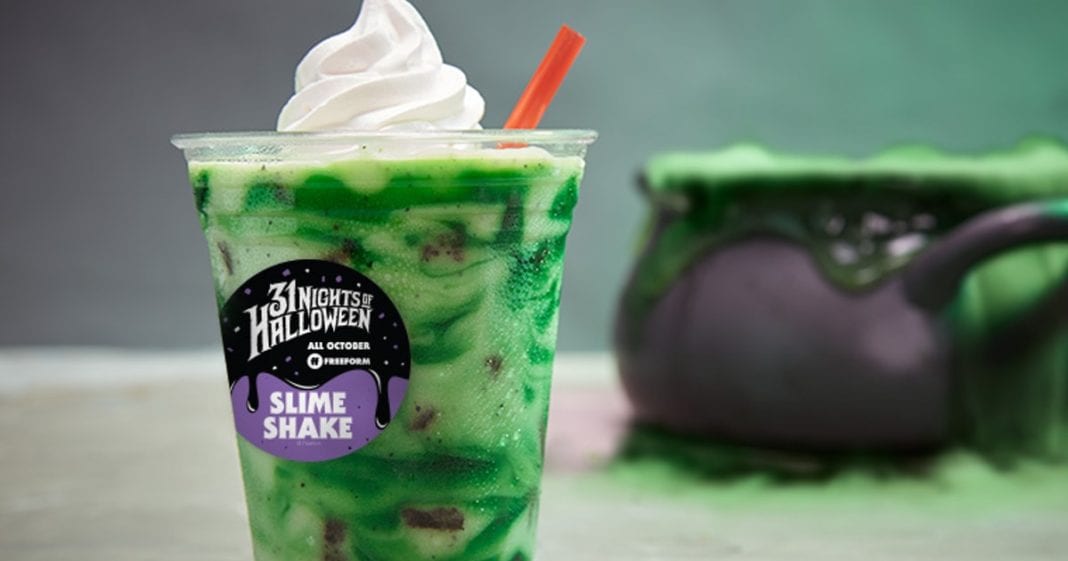 I’m seriously counting down the days until Halloween now that the holiday is only about a month away. In addition to putting together a creative costume, decorating your home in cobwebs, and prepping the pumpkins, it’s also important to indulge in all the delicious sweet treats available during the special season. Carvel Ice Cream and Freeform’s “31 Nights of Halloween” 2019 deals are kicking off the countdown to Oct. 31 with Freeform’s 31 Nights of Halloween Slime Shake that’ll get you Halloween ready in no time.

In a Sept. 23 press release, Carvel Ice Cream and Freeform announced the collaboration in honor of the television network’s annual “31 Nights of Halloween” event in October. Since scary movies and great food goes hand in hand, Carvel is releasing Freeform’s 31 Nights of Halloween Slime Shake on Oct. 1, which is a cookies-and-cream flavored shake made with vanilla soft serve that’s been blended with Oreo cookies and topped with rich whipped cream. Carvel’s edible slime is also added to it, making the shake a signature green and gooey color that makes it look like a proper sorcerer’s concoction. Enjoying the shake in front of a horror flick at home in front of the television seriously sounds like the perfect cozy fall evening.

Besides the shake, there are other delicious desserts available and special offers beginning Oct. 1. Carvel will be selling Halloween-themed ice cream cakes for $3 off, and the selection includes a Pumpkin Cake, Nutty the Ghost, and a Spider Cake. I also suggest trying out their Lil’ Screamers, which are adorable ghost-shaped ice creams that are the perfect party details. You’ll get $2 off the Lil’ Screamers at participating locations, according to Carvel.

“’31 Nights of Halloween’ is something fans across the country look forward to each October, and this year we’re excited to bring them their favorite movies with a side of sweet, festive treats,” said Nicolle DuBose, Senior Director of Marketing at Carvel Ice Cream, in the press release.

“31 Nights of Halloween” has been around for over 20 years, and this year’s lineup looks like it won’t disappoint. They’ll be airing the classic hit and its sequel, so buckle up for some proper supernatural action with the crew. If you’re ready for a real scare, they’ll also be showing the first three films. Other classics that will be aired are , and . It’s time to prepare yourself for a movie marathon, because these classics are too good to miss.

“31 Nights of Halloween” is undoubtedly a staple tradition for many fans. Just like it does every year, I’m sure that the countdown until Halloween on Oct. 31 will fly by. With the new limited edition Slime Shack in hand, get ready for an even sweeter and spookier month of fun.

The maker of Twinkies and Ding Dongs is staging a comeback

She Glues Magnets Onto The Bottom Of An Ordinary Plate For A Brilliant Reason...