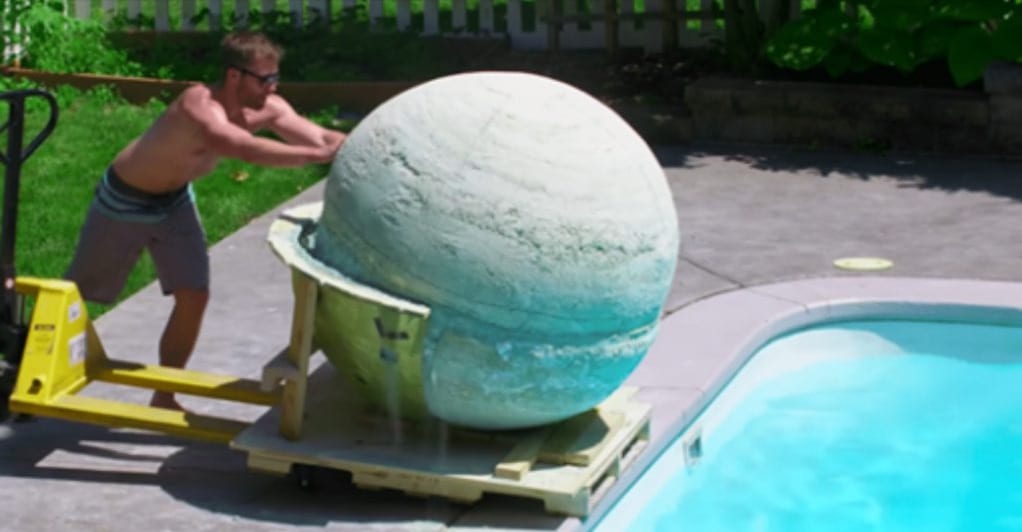 Bath bombs are one of life’s greatest little pleasures. There are few things more satisfying than sliding into a warm, colored bath and knowing that regardless of what kind of a day you’re having, you’re guaranteed to emerge feeling like a unicorn. Bath bombs are also a great way to bond if you’re having sexy times with your significant other. What could be better than lathering each other up with the scented bubbles they produce?!

Admittedly, bath bombs do have a downside and that’s the cleanup operation they inevitably require once you’ve drained your tub and are left with a bizarre stain, and, depending on the bomb used, additional mess like glitter and confetti. It’s also worth noting that they’re best used fresh and will lose their effectiveness over time if they’re not – although it’s interesting to imagine what a particularly old bath bomb would create…

But back to the upsides of bath bombs, aside from the soothing effect they can have on your skin, can we take a moment to appreciate how beautiful they make our bathwater? It’s like stepping into a painting. And while baths are usually pretty relaxing affairs, I think we can all agree that there is something incredibly satisfying about watching a bath bomb fizzle away. Personally, I like breaking ’em apart with my tootsies.

Despite being called bath bombs, they don’t exactly create a literal explosion. Thank God. Although that’s probably a good idea if there’s any closeted witches or wizards reading this and want to create a great prank to play on us muggles – Arthur Weasley, you there?! The closest you’ll get to an explosion with a bath bomb is a lot of fizz, unless you decide to create a 2,000-pound one and put it into a swimming pool.

This is something which the YouTubers behind Vat19 wanted to find out for themselves and what they created is nothing short of the greatest video of summer 2018. However, if you’ve ever tried to make a bath bomb yourself, or just so happen to work at Lush cosmetics, then you’ll know that a surprising amount of work is involved – and that workload is even greater when you’re trying to make one that’s abnormally large.

Check out the video below to see the glorious moment that the bath bomb exploded into the pool for yourself:

To create what they dubbed the “World’s Largest Bathbomb”, the Vat19 team had to build a specially made container to house their creation. If you ever tried to create a model of the solar system as a kid, think along those lines but bigger. Much, much bigger.

The inside of the contraption – which I’ll dub the bath bomb cooker – couldn’t be empty either. It was lined with sheet upon sheet of tin foil.

And what the hell did they fill this bad boy with? Well, all the usual ingredients that you’d expect to find in a bath bomb except they were used on an industrial scale. Literally. This meant that they had to buy dozens of bags of citric acid, cornstarch, and baking soda.

After this, they began the mixing process, and contrary to what you might think, this didn’t take place in a bathtub with a giant spoon.

Oh no, this was an industrial affair from start to finish, and the bath bomb was created using a cement mixer.

Once the mixture was created, the team were then faced with the arduous task of placing it layer by layer into the bath bomb cooker. We can only assume that cosmetic companies like Lush have a much easier way of making their bath bombs because this looks exhausting.

Once the first half of the bath bomb was complete, the bath bomb cooker was rolled outside so that it could dry and harden just like cement.

After this, the Vat19 team, already exhausted from making the first half of the bath bomb, had to summon their remaining strength to create the second half and because it had to be placed on top of the first, it made for even harder work. It was basically a scented workout.

This involved placing a cover over the first half of the bath bomb and slowly but surely filling it with the mixture and flatting it as they went along.

Once this was complete, the Vat19 team had to wait for the entire bath bomb to dry and then the fun really began!

Presumably wearing masks to protect themselves from the fumes which were coming off the bath bomb, the outer layer of its oven was removed by the poolside, and, as the picture below so fabulously demonstrates, it really puts the bomb in bath bomb when it comes to size.

It was then gloriously tipped into the swimming pool and created the kind of waves that you’d expect from a 2,000-pound object!

To avoid any accidents, no one was actually in the pool when the bath bomb was first tipped in, but when it was safely fizzing away, a group of adults jumped in and got to enjoy the bath of their lives. I’m not going to lie, it puts every bath I’ve ever had to shame.

Unlike the small pieces of bath bombs which float around most of our tubs after the initial fizzle, the Vat19 crew and their friends were left with chunks so large that they started playing games with them in the pool. I hope they were careful though – they could knock someone out!

And, like any good bath bomb, it turned the blue of the pool into the most satisfying violet color. This aerial picture of the aftermath is amazing.

But being a realist, I can’t help but wonder/dread how the hell they managed to clean that pool afterward. I’m pretty sure they had to hire a pro!

On the subject of swimming pools being given novel purposes, though, the Vat19 team are by no means the first people to do it. Not by a long shot.

No, your eyes aren’t deceiving you, that pool is really that deep. Named Nemo 33, this indoor pool in Uccle, Belgium, was once the record holder for the world’s deepest pool, and it is used to help teach divers their craft as it comes complete with its own underwater caves.

Its deepest points go as far down as 100 feet and it contains a whopping 2.5 million liters of water. It’s basically a tiny ocean in and of itself.

Speaking of the ocean, if you’ve ever gotten tired of visiting manmade wave pools, why not check out the Bondi Icebergs Club? Although, not just anyone can swim at this pool in Sydney, Australia. You have to be able to swim in ice cold water because the ocean spills into it.

It’s definitely one to consider if, unlike the Vat19 team, you’re looking to have the most refreshing pool dip of your life.

But if the thought of going for a swim in a pool with ocean waves crashing into it sounds like a bit too much for you, then look away now. However, if you’re a real thrillseeker, then The Devil’s Pool at the top of the Victoria Falls in Zambia might just be your idea of Heaven.

Not for the fainthearted, its swimmers are treated to views of a drop that’s more than 350 feet. Although it’s not a manmade swimming pool like the others on the list, during the winter months, a small rock pool forms at the top of the falls and it is used as such.

Another natural swimming pool that will give you a dip like no other is the world famous Blue Lagoon in Iceland. You can enjoy a naturally warm bath there, as it’s on top of a lava field, which basically acts as Mother Nature’s personal pool heater.

Now that we live in the era where just about anything is possible, if you want to enjoy all the fun that Mother Nature’s pools have to offer but simply can’t go to one (maybe you’re allergic to salt water), then you should check out the Seagaia Ocean Dome.

Once the world’s largest indoor waterpark, Seagaia Ocean is almost 1,000 feet in length and 300 feet in width. It’s got a retractable roof and its own simulated beach – so if there’s ever a nuclear war and life as we know it is wiped out, we can still have at least one beach. The only downside is that the dome closed in 2007 and hasn’t reopened yet, but with any luck, its doors won’t be closed forever.

Last and most certainly not least is the Four Seasons Hotel in Maui. This is basically the pool that has everything: a bar, underwater music and even flatscreen TVs. Unless you’re cheeky enough to pee in the pool, you’ll legitimately have no reason to leave it except to use the bathroom!

But while all of these pools are impressive in their own rights, you have to hand it to the Vat19 team for making an otherwise ordinary pool extraordinary. That being said, I dread to think how much the bath bomb and subsequent cleanup operation cost!

The religious case for Christmas is well known. But there’s a scientific one too...