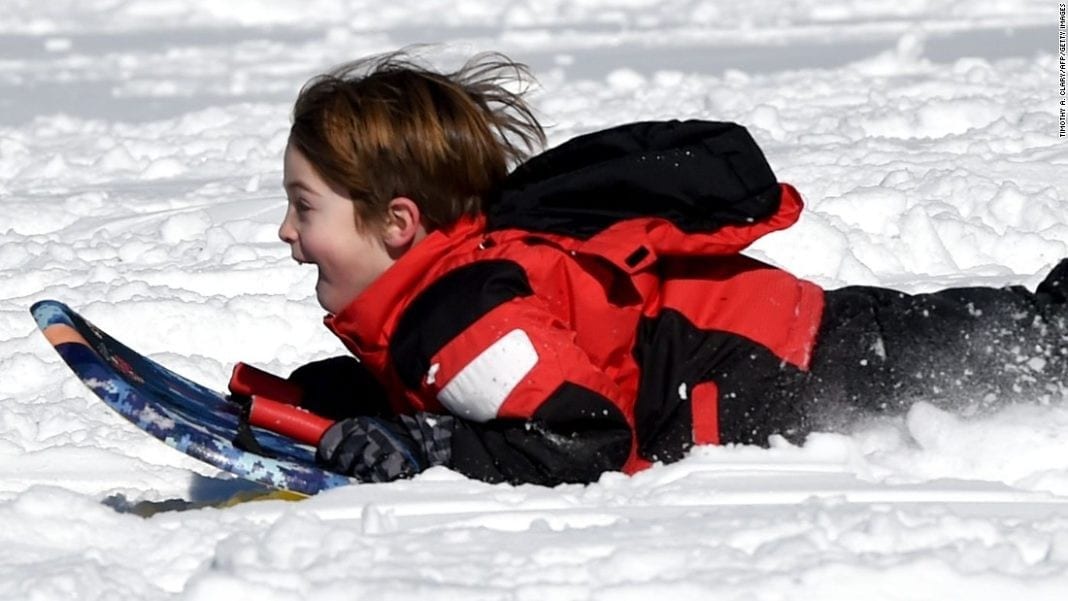 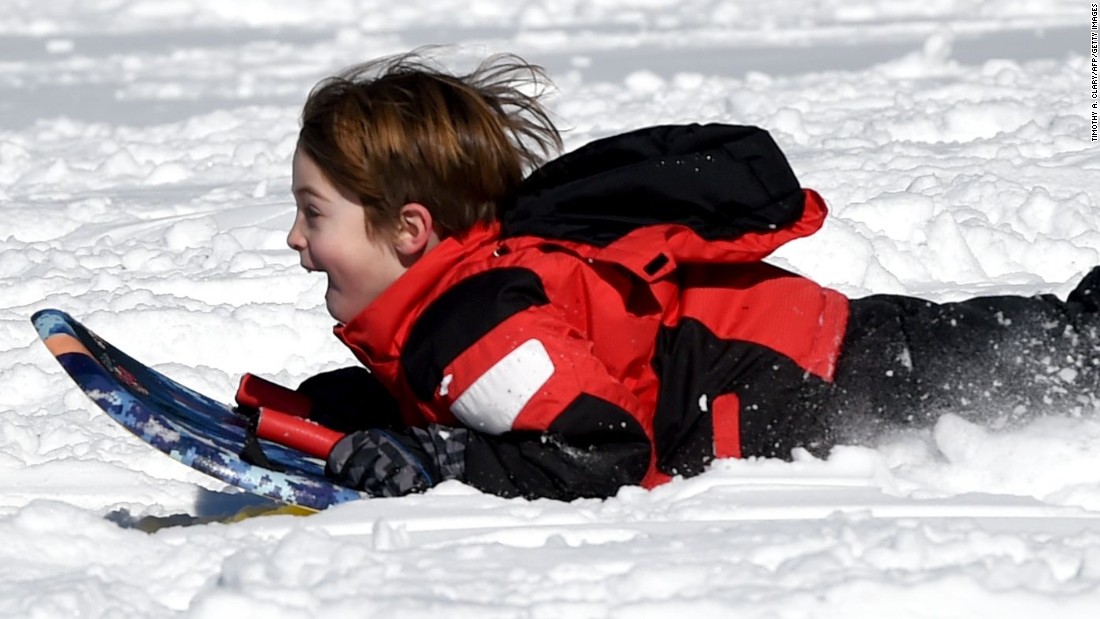 (CNN)When I saw the email announcing that New York had closed schools Tuesday because of the impending snowstorm, I thought two things simultaneously: My kids will be over-the-moon excited, and I face another stressful day in which I try to work from home (I’m lucky to have a job where that is an option!) and keep my girls, ages 9 and almost 11, out of each other’s hair.

It’ll certainly be a day of more screen time than I would prefer, but when Mother Nature strikes, what’s a parent to do?
For some ideas beyond Minecraft and movie marathons, I reached out via email and social media to women and men across the country who had a treasure trove of suggestions to keep the kids happy and parents sane.
Sarah Cottrell of Bangor, Maine, has plenty of experience, since her state gets its fair share of epic snowstorms. Her approach? Let the kids lead the day. “I tell the kids they can do whatever they want as long as they stay safe,” said Cottrell, who has two children, 3 and 7, and is expecting her third.
Her children have come up with their plan for this approaching storm, said Cottrell, who is a staff writer for Scary Mommy and runs the blog network for the Bangor Daily News. They want to make slime, fill bottles with colored water so they can “paint” the snow banks and make their own cookies.
When cabin fever hits and they are “literally crawling up the walls,” Cottrell says, she’ll toss some toys and washable markers into the bathtub and let them splash around.
Eventually, it’ll be time for hot chocolate and a movie, which is when the kids typically fall asleep for a while. “That’s when I score some Mom time!” she said.

How to keep kids outside? Consider duct tape!

When I was a kid, I remember snow days when we spent pretty much the entire day out in the snow, with the exception of bathroom and hot chocolate breaks. Janis Brett Elspas, founder of the blog Mommy Blog Expert, had similar memories growing up on the East Coast in the ’60s.
“Moms back then in our neighborhood … would bundle the kids up in multiple layers and lock them out of the house ’til dark, leaving us to build snow forts, sled down the hill or shovel driveways for extra spending money,” said Elspas, a mother of four college-age children.
“How times have changed! Fast-forward to today. What is a mom to do when there’s a blizzard in cold climates (or heavy rain and flooding in California)? Instead of locking the kids out, moms are overprotective and keep the kids inside.”
Joelle Wisler of Nederland, Colorado, says her community gets plenty of snow, but it takes a lot for the schools to close. When they do, she has a novel approach to keep her kids, 5 and 10, outside longer: She will duct-tape their boots to their snow pants and their mittens to their coats. “Seriously, they play outside so much longer, because the snow can’t get to their skin,” said Wisler, who’s also a staff writer for Scary Mommy.
Amanda Mushro, a blogger and life hacks expert with a series on TLC, shared some other creative ways to keep the kids outside. In addition to letting them “paint” the snow by mixing food coloring with water, as Cottrell suggests, she recommends pulling out the summer sand buckets and shovels, which can be great tools to build snow forts and castles.
And don’t forget the bubbles, she said. “Bubbles aren’t just for summer fun! Bring them back out when the temperature is below 32 degrees,” said Mushro, whose kids are 5 and 7. “When you blow a bubble outside, it will freeze! Perfect for a little frozen science fun!”
You may score the “Best Parent” award if you surprise your kids with another of Mushro’s tips: Toss their pajamas and blankets in the dryer before you head outside to play in the snow. “When you get back, everyone has warm, toasty clothes to put on,” she said, and your kids will think you’re a genius!

Louise Sattler, who has two grown children, remembers 2010, when her son’s 18th birthday was moved up a few days because of an impending storm. Six teens showed up with their sleepover gear, but even before the cake was presented, the roads started to get treacherous, she said. The storm came much sooner than expected and dropped over 24 inches of snow in total, which meant the kids had to stay at Sattler’s house for days.
“But the kids had a plan! They decided to use this opportunity as a chance to make money, so they quickly formed a snow removal service (and borrowed tons of jackets, snowpants, etc. from us),” said Sattler, a co-founder of 411 Voices, a collective of professionals with social media experience. “They went door to door seeking houses that had driveways with snow piled up … and made hundreds of dollars in four days shoveling out driveways and sidewalks for neighbors.”
The takeaway for today’s parents: Sattler says we should put teenagers to work in the neighborhood by shoveling, running errands that can be done on foot and babysitting for those parents who have to go to work.
A snow day doesn’t just have to be about our kids, many parents said. It can be an opportunity to share some much-needed down time with our children or do an activity with them.
“Take time to play right along with them (if you get a snow day, too, that is),” said Meredith Sinclair, a television commentator and author of “Well Played: The Ultimate Guide to Awakening Your Family’s Playful Spirit.” We need “playtime” as grownups, too, and we rarely let ourselves truly “go there,” she said.
“Look at it as Mother Nature’s way of telling you to awaken your own playful spirit! Create a list of playful stuff your kids long to do … blanket forts, Play-Doh pounding, cookie baking, dance party, etc. and just let go.”
Robi Ludwig, a mom of two teens, thinks a snow day is a great chance to watch a movie or the news together and discuss it afterward.
“It’s a great opportunity to do something together and to gain insight into the way they think about themselves and the world,” said Ludwig, a psychotherapist and author of “Your Best Age is Now.” “It’s also a way for parents to impart their wisdom and thoughts about things in a fun way.”
It’s also an excuse not to go out in the snow, she joked. “Can you tell I’m not into the cold and am looking for an excuse to stay indoors?”

Keeping a sense of humor

Gina Rau of Portland, Oregon, said a typical school year might mean one snow day at most. “This year, we were blessed (cursed?) with 10 snow days, and even though we hit 60 degrees Sunday, we’re not out of the winter yet!” said Rau, founder of Mighty Big Impact.
A snow day means she can’t head downtown to meet with clients for her business, working with leaders and companies to better tell their brand story, so she puts on her snow gear and heads out with the kids.
“The snow is such a rare treat for us, so we love getting out to play,” said Rau, whose kids are 10 and 13. “There was a lot of sledding, snowball fights and even a Pokemon-themed snowman this year.”

Jessica McFadden of Silver Spring, Maryland, founder of the blogs A Parent in Silver Spring and A Parent in America, said there have not been many snow days this year, so she will be happy to be her “best snow day mommy” to her three kids, 5, 10 and 13, on Tuesday.
She’ll “cheerily” bundle everyone up to head out into the snow dozens of times throughout the day and watch “lovingly” from the window as her kids play.
This is quite a contrast from last year, when there were so many snow days that her children missed 13 days of school and had numerous other delays due to the weather, she said.
“I was not so cheerful,” she said. In fact, she created a number of hilarious memes to express her “exasperation” as a mother who runs her business from home and appreciates “education outside the house.”
One features an angry-looking Amy Poehler with the caption, “They’re all home with me tomorrow. Again. Really?”
Another showcases Betty Draper of “Mad Men” sipping red wine and smoking a cigarette with the caption, “They’re never going back to school.”
And then there is one featuring Brandi Chastain during that iconic moment when the US women won the World Cup in soccer in 1994 and Chastain celebrated by taking off her shirt and cheering in her sports bra. The headline: “School is open!”
Parents across the country might be cheering for that news after this latest storm passes.

14 Signs You’re Literally A Grandma And You Love It