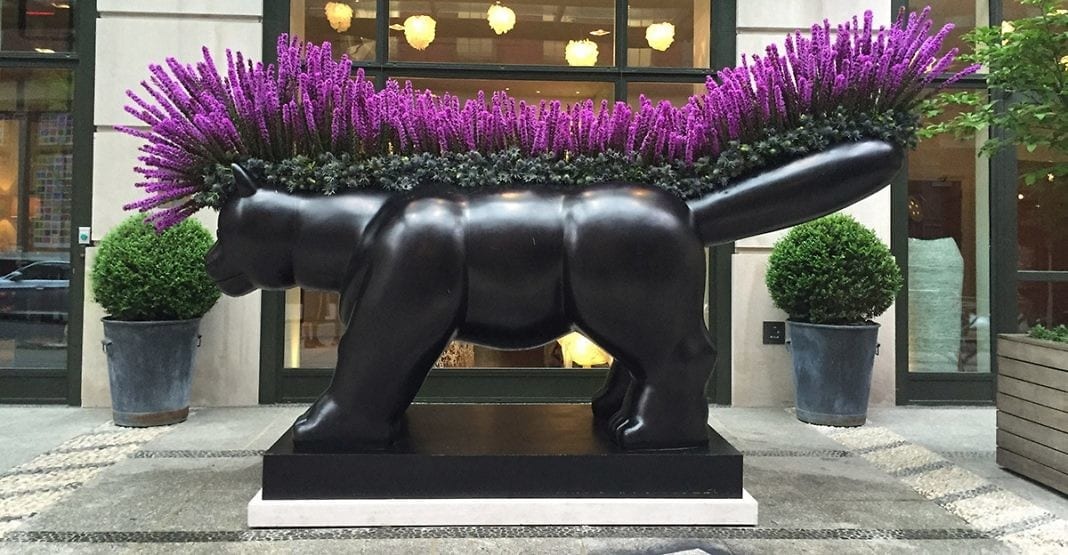 Lewis Miller is one of the most sought-after floral designers in the country.

His work is more than bouquets in corner shops or farmers markets; they’re lavish works of living art for major events, like fashion shows, galas, and other larger-than-life spectacles.

It’s when the champagne runs dry and the elite head for the doors, however, that Miller’s creativity really shines.

Miller doesn’t just toss the flowers in the trash. He gives many of them a sustainable, loving second life. Using public spaces as a canvas, Miller and his team use leftover flowers to add pops of color all over New York City.

His vision of covering the city in flowers began in October 2016 after decorating the John Lennon Memorial in the Strawberry Fields area of Central Park. He and his team assembled before dawn to arrange fresh blooms around the memorial as a way to share the beauty and magic of his flowers with the people of New York City.

Miller described the inaugural effort on his blog:

“So at 5:45 AM, my team and I filled the LMD van with 2,000 flowers and descended on the John Lennon Memorial in Central Park, a circular mosaic resembling a mandala with one word in the center: IMAGINE.”

As the sun came up, Miller feared their efforts would be swept away by the parks department, but thankfully, he wrote, “…[they] gave us their approval and blessing with a quick thumbs up.”

Before long, people were taking selfies and photos of the lush design and sharing them on social media.

A phenomenon was born.

“It’s nice to give our clients’ flowers a groovy second life,” he told Domino.

And even does a little blooming typography.

No space is too small or too large for a bloom or two … thousand.

Due to the impermanent nature of flowers, weather, and human nature, each flower flash lasts less than a few days.

“When we flash a sculpture, the flowers tend to last longer, sometimes even three or four days,” Miller told Domino. “With the trash cans, people feel more inclined to take them. It’s usually the early morning dog walkers that have the stickiest fingers and take the flowers home with them.”

The temporary nature only makes these living works of art even more delightful. They are rare, vibrant, and, thanks to the element of surprise, almost magical. For locals and tourists alike, they are a gift that keeps on giving.

Everything You Ever Wanted To Know About Using Dry Shampoo

She Glues Magnets Onto The Bottom Of An Ordinary Plate For A Brilliant Reason...