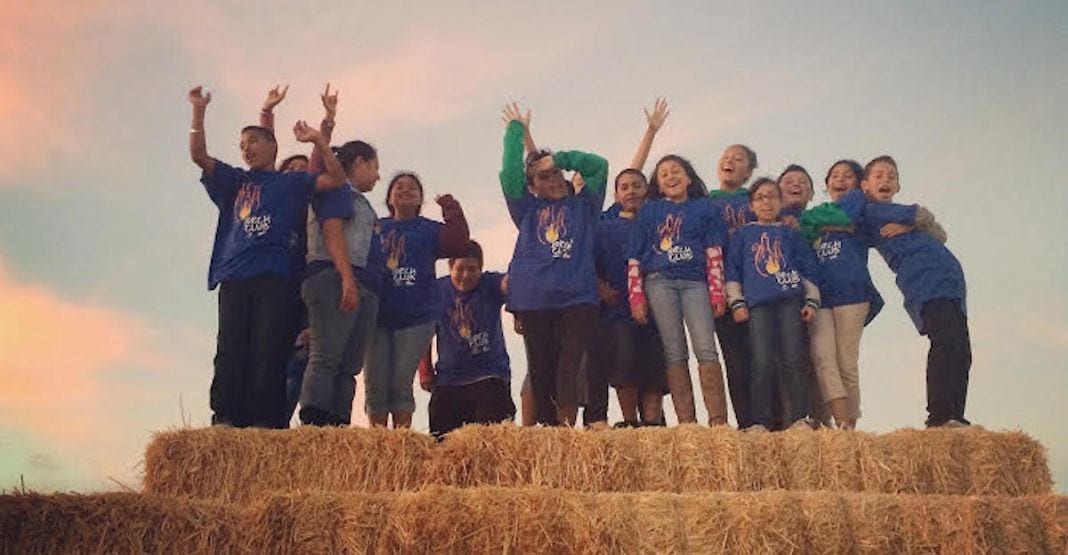 One day in 2016, the kids of the Ridgefield Boys & Girls Club in Connecticut met to discuss some hard truths.

“We had a guest speaker come in,” says Boys & Girls Club supervisor Jeff Goncalves, who organized the talk for a leadership program within the group called Torch Club.

“It was to benefit the Friends of Karen organization, which helps families of children who unfortunately are suffering from a terminal illness.”

Among the topics discussed was the idea that many sick kids miss out on key experiences in their childhood because of how their illness interferes with daily life.

All photos courtesy of Torch Club/Boys & Girls Clubs of America, used with permission.

The Club’s leaders asked the kids how they would feel if someone they knew, someone their age, had to skip their birthday because their medical bills were too high for them to afford to celebrate, Goncalves recalls. “That really hit home with our members.”

Lots of people have a notion of “tweens” and young teens as being self-absorbed. But the Club’s reaction to the Friends of Karen organization proves that’s not so.

“Our executive board members decided to come up with a project idea,” Goncalves says. But any uncreative fundraising ideas were out of the question — as Goncalves explains, “They know that I hate regular bake sales” — so they had to think out of the box.

Their answer? “A bakeless bake sale.”

The kids reached out to everyone on their Club’s contact list and asked for cake ingredients, along with all of the rest of the things one might need to throw a birthday party. Instead of baking cakes to raise money, they gave kids the opportunity to have one for their birthday by providing all the tools in a “birthday bag.”

“Cake mix, candles, frosting, napkins, plates — pretty much anything that could go into having a birthday party,” Goncalves says.

The project was a success.

By the end, they’d provided birthday bags for almost 20 kids who would otherwise have gone without. It was so successful that they even decided to enter their project in the annual Torch Club Awards, which recognize Boys & Girls Clubs around the country for community volunteerism and service. They won first place and received a grant from Old Navy’s ONward! program, which helps support many of Torch Club’s activities.

What was even more surprising, though, was that this group of middle schoolers responded to a pretty heavy topic — terminal illness in their peers — in a well-adjusted and actionable way.

“That age is tough to work with in general,” Goncalves says. “But when you find something, you know, a cause or a passion or something that really hits home, it brings everyone together in a way where we can focus their attention to helping, more than scaring them or making it awkward.”

Torch Club has figured out the key to inspiring middle schoolers is to act. Just hand them the reins.

“The key is truly to let them lead,” says Teresa Welch, vice president of program, training, and youth development services for the national headquarters of Boys & Girls Clubs of America.

“A lot of times as adults we sort of forget that. We assume that they need us to lead them,” she says. “But when it’s led by youth, that’s when they’re absolutely the most successful.”

The Boys & Girls Clubs’ mission, through programs like Torch Club is to teach leadership and life skills to young kids, in order to prepare them for the challenges of adult life. But those leadership opportunities have advantages in the present, too.

Leadership gets younger kids engaged because it allows them to decide which issues to address, Welch says, and they can pick issues that impact their own community. She gives an example where kids who liked to skateboard got in trouble for graffiti that went up on buildings near where they skate.

“The kids will start talking about, well, we’re in trouble all the time for having our skateboards because they think we’re the ones doing the graffiti. But that wasn’t us,” Welch recalls.

But instead of allowing the kids to grow resentful of the authority with which they had their conflict, Boys & Girls Clubs youth development staff encouraged them to come up with a creative solution.

“So they did a project where they actually painted over the graffiti with these beautiful murals,” Welch says. In doing so, the Club both helped beautify the neighborhood and learned how to solve a problem in their community.

The Torch Club program at Boys & Girls Clubs is showing all of us that getting kids engaged young is possible — and it has nothing but positive results.

Young people who volunteer improve their community, their relationships with other kids, and themselves. Civic engagement shows kids how to take their energy and emotions and channel them into something good.

“All research shows that when young people volunteer, feel part of their community, and are engaged, that overall they will be more successful,” Welch says.

“That’s a big part of the job. It’s why I love working in the field that I work,” Goncalves says. “To change the mindset of caring about themselves and being that self-absorbed tween to thinking outside the bubble, outside their community.”

“It’s remarkable, and we see it all the time,” he adds. “It’s why a lot of people in our field stick with it for life.”

A Documentarian Set Out to Expose Monogamy as a Sham. Then She Fell in...

Kim Kardashian: I Have No Idea What Kanyes Tweets Mean Either

Teenager, 15, triumphs in Moroccan desert challenge — on an e-bike