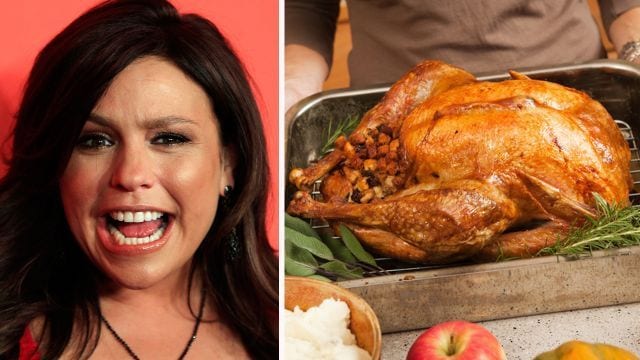 Unless you picked up one of those birds with a pop-up timerand even if you did, since they don’t workyou’ll want to have a thermometer on hand this Thanksgiving to tell when the turkey is done.

But the thermometer plays another crucial role in the holiday meal: if you’ve bought a frozen turkey, from both a proper-cooking and a food-safety perspective, it’s also a good idea to take its temperature from time to time as it thaws. 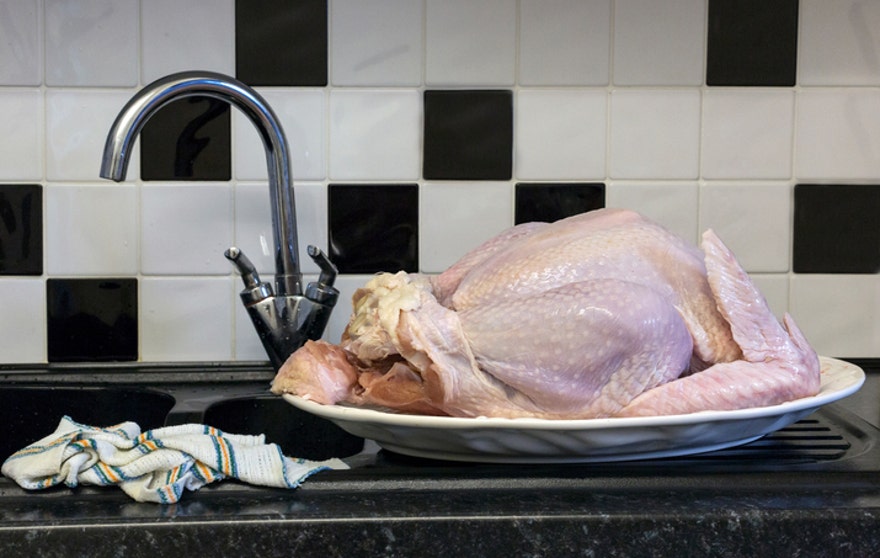 So while you’re thawing it, take the turkey’s temp by inserting an instant-read thermometer into the deepest parts of the breast, checking in several different places. You’re looking for a thermometer reading above 32 degrees Fahrenheitabove freezing, in other wordsbut below 40. Anything warmer than that is like an invitation to food poisoning: pathogens grow above 40 degrees that aren’t necessarily killed off in the oven.

How best, then, to fully thaw a turkey?

As it happens, the folks in the test kitchen at ThermoWorks, the company that makes the well-regarded Thermapen thermometer, have been exploring this topic in some depth lately. ThermoWorks’s Tim Robinson stopped by the Epi offices recently to explain different turkey-thawing methods to us. I’m ranking them from worst idea to best idea.

Worst: On the kitchen counter

Don’t do this. My god. Unless you really hate your guests. (In general, thawing meat at room temperature is not among the best ideas anyone’s ever had.)

Better: In the refrigerator

This is a tried-and-true method; its chief drawback remains that it’s also the most time-consuming. Plan on 24 hours of fridge-thawing for every four to five pounds of turkey, says ThermoWorks; thus, for a 15-pound bird you can expect to wait about three days. This is best if you have an auxiliary fridge in the basement, but probably a bit inconvenient otherwise. At any rate you’ll want to place the turkey on a rimmed baking sheet to catch any moisture.

There are a couple of different ways you could go about this, all of which involve submerging the turkey in ice water in some vessel or another. ThermoWorks estimates that a 15-pound turkey will take about eight hours to thaw this waymuch more quickly, in other words, than in the fridge.

First, you could do it in your sink. This has the obvious drawback of rendering the sink unusable, and because the contents of the sink will be constantly pulled toward room temperature, it’s also not a set-it-and-forget-it-type situation. “You’ve got the measure the water,” Robinson says, to make sure it never gets about 40 degrees. Monitor the proceedings as often as every half hour, and if you see the temperature venturing in that direction, add more ice to set it straight, or drain the sink and fill it anew. (You’ll also want to seriously sanitize the sink afterward.)

WHY THANKSGIVNG COSTS LESS IN 2016

You can do a similar thing in a standalone bucket, also checking frequently to make sure the temp isn’t ticking up, or a coolerthe latter may hold its temperature a little longer than a plain old bucket, but you’ll still want to check the ice water frequently to make sure its temperature isn’t rising above 40 degrees. (Or you can get yourself a digital thermometer and program an alarm to go off above that temperature.)

Here are a couple of upgrades, though.

Do you, in fact, have another refrigerator in the basement? Take some shelves out of it and put the bucket of ice/water/ turkey in there; since fridges hover somewhere between 32 and 40 degrees, that’s where your ice water, and therefore your turkey, will stay. Expect it to thaw apace, but remember to check it with a thermometer before roasting to make sure it’s thawed all the way through.

It’s Novemberdoes it happen to be somewhere between 32 and 40 degrees outside? That’s certainly not impossible, and if it is, congratulations, you’ve come across the quickest way to thaw a turkey while leaving as much usable space in your kitchen/sink/refrigerator as possible: put the bucket on the back porch and let that baby thaw back there.

The only thing to keep an eye on now is the air temperature itselfand also, I suppose, the neighbor’s dogs.

Dad bakes pasty the size of his newborn son