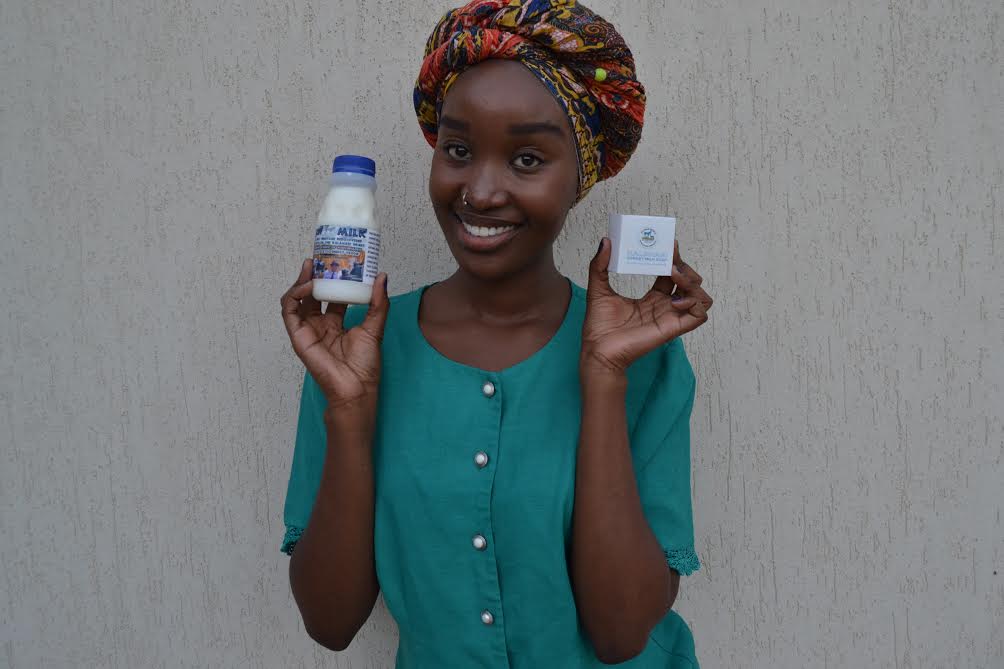 About a year and a half ago, I decided to quit birth control and almost immediately found myself facing off against severe adult acne among other side effects. (Hello, ovulation cramping. I don’t think we’ve met before). I had no idea what to do; I’d never dealt with acne that bad. I had weathered the obligatory teenage zits, but my skin cleared up well by the time I reached 19. It took months, many appointments with a dermatologist and a ton of money to finally get my skin clear again. However, I was left with a lot of hyper-pigmentation, especially on my cheeks, where I was left with large cysts. After my dermatologist could only find some pricey solutions to my new problem, I had to part ways with her and tackle my skin issues on my own. Soon enough, I looked up donkey milk acne methods.

Once I decided to go the natural route, I went big. Since then, I’ve tried just about any natural beauty product for scarring that you can make at home, and I mean it. If it’s on the internet, there’s a good chance I’ve given it a go, with varying degrees of success and humiliation. (I may or may not be talking about the week I reeked from using onion juice as a toner). Still, I’ve found very few products that have worked well enough for me to stick with, that is, until I got into a regular routine with my donkey milk products. Here’s what I learned.

How I Discovered Donkey Milk

Recently, I’ve been seeing more reports on the health benefits of donkey milk. The claims are very bold: drinking donkey milk can prevent artery hardening, and helps relieve the symptoms of asthma and throat infections. What really piqued my interest, however, was how successful it has been in treating skin conditions like psoriasis and eczema (according to multiple online blogs).

For all its supposed benefits, you’d think people would be using it more by now, right? But I soon found out why it hasn’t exactly caught on; it is not a cheap milk option. I live in Botswana, and found a company called Kalahari Donkey Products that’s based here makes and sells donkey milk and donkey milk products. A 2 ounce bar of soap goes for about $5, and a cup of donkey milk goes for about $6. That’s not very affordable around these parts, especially considering the fact that I was planning on taking four milk baths (using two cups of milk in each bath) over the course of four weeks. That comes up to $48 for the month, and another $15 for the soap, since I decided I’d need about three bars to last through the month. I went ahead and purchased the products anyway, rationalizing that it was a cheaper option than all those dermatologist visits.

Besides using it for my milk baths, I also decided to make a donkey milk-based face mask, which I would use twice a week instead of the mud mask that I normally use. I would use the soap on my face and body for a month too. I was a little bit worried about using the donkey milk soap on my face because one of the ingredients listed on the box is coconut oil, and as many acne-prone people know, coconut oil on your face is a big no. It’s known for clogging pores. I decided I’d immediately stop using the soap if I noticed any breakouts.

Before I started using the milk, I did a taste test because well, I was curious! I wish I could replace this with my regular milk. I hate the richness of full fat milk, so I love the fact that donkey milk is a naturally lighter version. It has much less fat content, and tastes like a slightly sweeter version of skim milk. If it was more affordable, I would definitely drink this all the time.

I prepped my donkey milk bath and face mask, and I’m surprised at how much I loved both of these. I added lavender oil, baking soda (which is an exfoliant) and 2 cups of donkey milk to my bath water. As per the instructions I found on the internet, I soaked in the bath for 20 minutes and then rinsed myself off with plain water (no need to wash/scrub your skin during the bath). During my soak, I also had a face mask on made of turmeric, donkey milk and honey. I’ve used honey and turmeric as a face mask several times before because they have proven to be effective at fading my spots.

What I immediately noticed from adding the donkey milk to my bath and to my face mask was how soft my skin immediately felt after. Seriously, I walked around the house naked for half an hour savoring how nice my skin looked and felt. (I highly recommend it.) I obviously didn’t expect to see the spots on my face fading immediately, so I wasn’t disappointed by the fact that my scars pretty much looked the same as before I tried the mask. Still, I could confidently confirm that donkey milk is great at getting rid of dead skin and making your skin feel more supple, which was definitely a nice perk.

Next up was the soap. I love the fact that it smells like lemongrass, although it isn’t listed as an ingredient. It also isn’t very easy to lather; using it on my face and on my whole body turned out to be more arduous than I’d have liked. Unfortunately, the donkey soap wasn’t as good to my face as I anticipated. My usual face wash is a Cetaphil foam wash for acne prone skin, which has been great at controlling the shine in my T-zone. A few days into switching to the donkey milk soap I noticed that my nose was getting very shiny and greasy by midday. I didn’t break out, but after two weeks I stopped using the soap on my face because I couldn’t stand how oily my nose was getting.

I kept using the soap on my body over the four weeks, took another three milk baths and used the donkey milk face mask twice a week as originally intended. That’s when I started to notice an unexpected difference in my skin. A few months ago, I got a fungal infection that left some blemishes on my arms. I’ve been using tissue oil to try to get rid of them, but if it has been working (instead of it just being my body’s natural healing process), it has been slow. However, since I started using the donkey milk the blemishes have gotten less noticeable. So I guess you can add “will fade the blemishes from your nasty fungal infection” to a list of the other skin benefits.

So what’s my verdict on donkey milk as a skincare product? A resounding yes! It makes one hell of a milk bath, and I love how soft my face feels when I use it in my face mask. Moreover, the fact that it helped reduce the appearance of my blemishes means I’ll definitely be taking more milk baths and using the soap on my body fairly often. I can’t say for sure that donkey milk will help to get rid of hyper-pigmentation. I didn’t see any noticeable differences in mine, although four weeks might not be enough time for me to conclusively say it doesn’t work. If you can find donkey milk and donkey milk products and if you can afford them you should definitely give it a try. It’s supposed to have many benefits, so it will more than likely have one for you.

Instead Of Putting This Dough In A Baking Dish, They Did Something So Much...