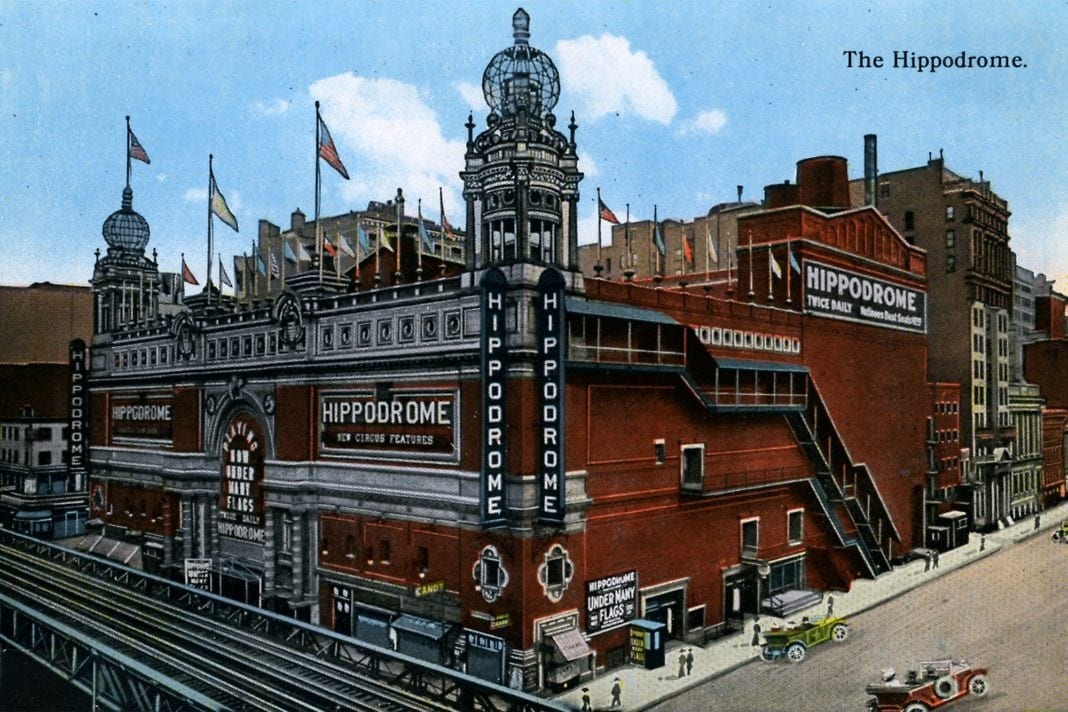 New York’s Hippodrome was where Houdini made an elephant disappear, and for over 30 colorful years the venue featured circuses, illusionists, and vaudeville acts, and a cinema showing then-newfangled moving pictures.”>

On Jan. 7, 1918, a packed crowd took their seats around the massive stage of the Hippodrome in New York City. When the show started, their eyes caught the famous illusionist Harry Houdini standing in the middle of the arena next to a giant cabinet. A large elephant was curiously being led onto the stage to join him.

The magician had been traveling the world astonishing audiences with his feats of magic for over two decades. But this was the first time he had brought his act to the largest performance venue in the world. And he had plans to make history during this show.

According to an account in Variety, it took 15 attendants to turn the cabinet in a circle, opening all of the doors to show the crowd that there were no trap doors, no hidden tricks. Then, a trainer led the elephant into the giant box, and Houdini sealed the doors behind it. When the container was opened back up a beat laterpoofthe giant pachyderm had vanished!

The management of the Hippodrome has no idea how the trick is worked; even the stage hands who draw out the cabinet have so far failed to get a clue, The New York Times reported a few days later. It was the first performance of Houdinis most spectacular disappearing feat yet, and it would become among his most famous illusions.

Houdinis inaugural performance at the Hippodrome was dazzling, and it was exactly the type of entertainment Frederic Thompson and Elmer Dundy had envisioned thirteen years earlier when they decided to create the largest performance hall the world had ever seen.

On April 12, 1905, the Hippodrome opened its doors to the denizens of New York. Over the next 34 years, it would host circuses, illusionists, and vaudeville acts, become a cinema showing the newfangled moving pictures, and transform into a sports arena, changing with the tastes of the times until the Great Depression doomed it to a memory on the ever-changing streets of the city.

But, oh, the fun that was to be had before that day would come.

Two years before the Hippodrome would begin leaving its mark on Manhattan, Thompson and Dundy had created another historic landmark dedicated to amusement: Luna Park at Coney Island.

The roller coasters and boardwalk attractions of Luna Park drew in and delighted ordinary citizens of the city. Following its success, the business mavens decided it was about time a more affordable entertainment venue opened across the East Rivera space for the majority of the citys hard-scrabble citizens to take a break and have a little fun.

They chose a location at the heart of Manhattans Theater District to create what they claimed was the largest theater in the world. And it was massive. When it was completed, the Hippodrome spanned the entire block between 43rd and 44th Streets on Sixth Avenue, just a block away from Times Square, which had been renamed two years earlier in honor of its most famous tenantThe New York Times. Combining Beaux-Arts and Moorish influences, the buildings red brick facade featured white accents and two towers decorating each end, both topped by a metal globes.

Inside, the theater was an ornate Roman confection of gold, ivory, marble, and deep red. It could hold over 5,000 visitors at a time enjoying the show underway on a 100-by-200-foot stage that could host a total of 1,000 performers.

The theater featured the most advanced technical bells and whistles, including a giant, 8,000-gallon water tank that could rise up onto the stage to provide the perfect setting for water acrobatics and feats of wonder. The shows were illuminated by the glowing bulbs of 40,000 electrical lights and had the choice of enough in-house sets and sceneries that, if placed in a line, they would extend more than three miles. Put another way, they would pave Broadway from the Battery to Times Square.

According to William R. Taylor in his book, Inventing Times Square: Commerce and Culture at the Crossroads of the World, Thompson and Dundy had set out to fill the entertainment vacuum created by a Broadway theater system that only offered expensive tickets out of the reach of most of the citys residents. Tickets to the Hippodrome attractions, on the other hand, could be purchased for as low as twenty-five cents.

In addition to a low cost of entry, Thompson fashioned his Hippodrome as a plaything for the masses, a gigantic toy for the overworked, play-starved men and women of the twentieth century, Taylor wrote.

It was a place where the working class could leave their troubles behind and let their imaginations run wild with the proffered entertainment of the two-a-day shows.

The stage was set on opening night when the city turned out, filling every seat in the theater, for the inaugural performance that lasted four hours and included a comic opera, a circus, a spectacular drama, and a ballet of marvelous beauty that, by all accounts, went off without a hitch.

The scene was set on that first night for over two decades of wildly successful shows and raucously packed houses. Thompson and Dundy would resign their managerial roles only a year later, citing the need to spend more time on other projects, but the theater was soon passed on to the entertainment behemoth The Shubert Organization who continued the theaters mission. Curtains would come up on circuses and musical spectacles, plays and illusionists who would perform to sold out shows of locals and tourists.

Nearly a year after Houdini disappeared an entire elephant in the Hippodrome, the theater set a new record. The New York Times reported on Jan. 6, 1919, that the venue had earned $78,675.75 during New Years week that yearthe equivalent to $1,127,804.96 in todays currencyin just one week. It was the highest figure in the history of that institution and the total is believed to be the largest ever played to in a single week by any place of amusement in the world.

But times change, as do societys view on what entertainment is en vogue. And the Hippodrome had trouble keeping up with this early success.

Over the ensuing years, the space changed hands several times, with each new owner attempting to keep the theater relevant. Beginning in the 1920s, moving pictures were introduced to the theaters line-up (with the space officially rebranding as the New York Hippodrome Cinema Theater for a short time in 1933).

The management tried out operas and the grand plays and musicals that graced its neighboring theaters on Broadway, the most popular being Billy Roses Jumbo in 1935.

In its last gasp, the Hippodrome was reincarnated as a sports venue, hosting the wrestling match of Ed Strangler Lewis facing off against Lee Wykoff on its opening night.

But even this latest evolution couldnt save the HIppodrome from the lasting effects of the Great Depression, which would ultimately spell its demise. In 1939, the location became too valuable, and the building was sold for redevelopment. On Aug. 16, 1939, the grand Hippodrome closed its doors for the last time.

Today, this prime block near Times Square is the site of a gleaming glass office building. But the wonders that were once witnessed in the grand entertainment palace havent entirely been forgotten. In the lobby of the modern building (named after its predecessor), hangs an old photo of a grand, Beaux-Arts theater that hints at the attractions that may once have been witnessed just through its front doors.