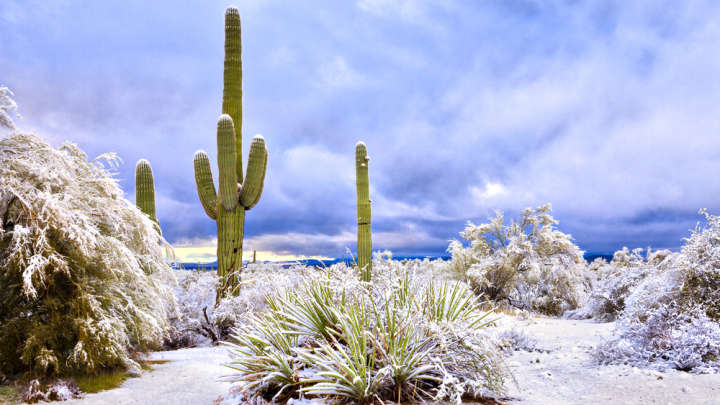 It’s not often you see the Grand Canyon, or the American southwest in general, liberally scattered with snow but it turns out when you do, boy is it pretty.

Photos have been emerging of already beautiful natural scenes from Arizona to New Mexico looking even more stunning after an unusual cold snap in the west hit over Christmas and the New Year.

While the northeast, from Washington to Boston, has been experiencing an unseasonably mild winter, throughout December, snowfall in the southwest ranged from 1 centimeter (0.4 inches) in Tuscon, Arizona, to 46 centimeters (18 inches) in Los Alamos, New Mexico, and even a reported 51 centimeters (20 inches) in Mountainair, 70 kilometers (44 miles) south of Alberquerqe. Even Southern California saw some.

The Sonoran desert – which usually sees winter temperatures of up to 32°C (90°F) in the day and 20°C (68°F) at night in California and Arizona – rang in the New Year by decorating its famous saguaro cactuses with a light smattering of snow.

Sedona, a desert town in the Coconino National Forest, famous for its stunning red rock buttes and canyons, was also blanketed in a snowy covering.

Iconic sites like the Grand Canyon and Monument Valley were not to be outdone and joined in on the action too.

So where has it all come from? According to the Washington Post, a deep pool of cold air at very high altitudes has been hanging over the region for the last week or so. It is beginning to pass now and temperatures will soon return to normal.

Snow in these parts of the US is certainly rare, but not unheard of. Just like the occasional snow in the Sahara, or the Atacama desert – the driest place on Earth – bursting into flower, it is related to weather phenomena like El Nino, which are exacerbated by climate change, and we’ll likely be seeing them with increasing frequency in the coming years.

Beyond Invisibility: Engineering Light With Metamaterials

Tequila Lollipops: For Getting Shadily Drunk On The Go