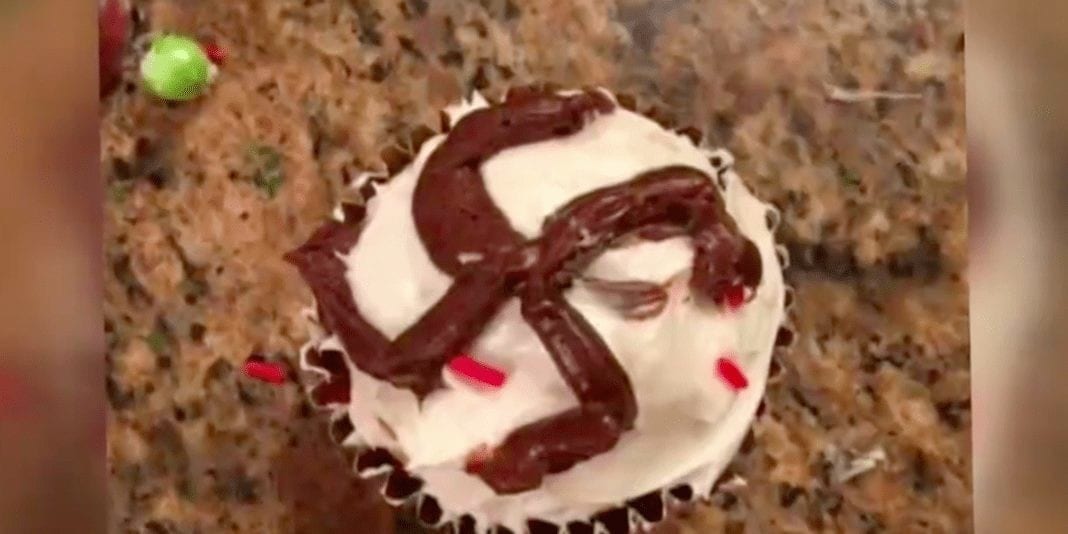 An Arizona mother said she hopes a cruel birthday cupcake given to her teenage daughter will become a “teachable moment” about the horrors of the Holocaust.

The mother, who lives in Phoenix, said her daughter’s 14th birthday party this month included cupcakes that guests were allowed to frost. She said two girls who are friends with her daughter decorated one cupcake with a chocolate swastika, even though the birthday girl is Jewish, according to KPNX-TV.

One girl then posted a photo of the cupcake to Snapchat.

The woman asked that she not be named to protect her daughter.

The mother said in a Facebook post, which has since been made private, that the girls told her they did it to “be funny.” She said the teens all recently learned about the Holocaust in school and were aware of the symbol’s meaning.

The girls uploaded photos of the swastika cupcake to Snapchat, according to Phoenix New Times.

“It’s not a hate crime,” the woman told the paper. She added she was nevertheless “pissed off.”

The Huffington Post reached the woman, who said she fears the photo of the cupcakes posted by KPNX TV and other outlets are being used in a divisive way.

She told HuffPost by email, “It’s hard enough being a teen, then to have all this snowball over what I consider an ‘insensitive teenage moment.’ I stand behind my posts[,] just hated seeing them spread around and have people turning it into a Trump v Hillary thing.”

Phoenix New Times reported the girl’s mother contacted parents of the teens responsible for the tasteless frosting, then shared a photo of the cupcake on Facebook with this comment:

I thought long and hard about writing this, but you know, it’s better to lose some aquaintences than remain silent. This is not a political post, but i believe this has EVERYTHING to do with the political environment we’re now living in. I think everyone who knows me knows i don’t “have an agenda”. I’m not part of the mainstream media (who I love by the way if anyone is asking) and I truly hope from the bottom of my heart that our prez elect can bring this cracked country together. Incidences of awful racist, misogynistic, anti-semetic, etc. behavior are skyrocketing — you see it in posts that have been forwarded or news stories, but it always happens “somewhere else” or “not in my backyard”. Well how about it happening right in YOUR OWN HOUSE? By your 14 year old daughter’s “friends”. At her own birthday party last night? At what should’ve been a really happy occassion, there were charades, name that tune games, a viewing of the Princess Bride, pizza, Polaroiding, gift opening and cupcake decorating. I was upstairs hiding with the dogs b/c I believe 14 year olds don’t need to be babysat while putting sprinkles on cupcakes. Well, this apparently happened (I only found out about it this morning). Let me tell you that I am Jewish, my daughter is Jewish, there was another Jewish girl at the party as well as many other girls of different religions who don’t have a negative bone in their bodies. But then there were the two girls who created this. Why? Is this funny? Is this right? Is this nice to do at another person’s party in another person’s house? Are the lids to human kindness and decency ripped off so permanently that this can happen to YOUR kid in YOUR house? Just something to think about and maybe have a discussion with your children about certain actions.

The girls apologized for their tasteless joke, the woman said in another Facebook post also made private.

Using hate symbols in attempts at jokes sends a bad message, according to anti-defamation advocates.

“When you joke with symbols like the swastika, you begin to normalize them and make it very casual within our society,” Carlos Galindo-Elvira, director of the Arizona Anti-Defamation League, told KPNX.

Sightings of swastikas and other symbols of hate have surged since Donald Trump’s election victory. On Nov. 12, someone drew a swastika on four dormitory doors at New York City’s New School. Six days later, a Brooklyn park named in honor of Beastie Boy Adam Yauch was desecrated with swastikas and pro-Trump graffiti.

The day after the election, two swastikas were spray-painted on a building in Philadelphia, according to Mic.com.

CORRECTION: A previous version of this article, following KPNX’s report, misstated that more than one cupcake was decorated with a swastika. It also misidentified the family’s city of residence.

The mother’s name has been removed at her request.