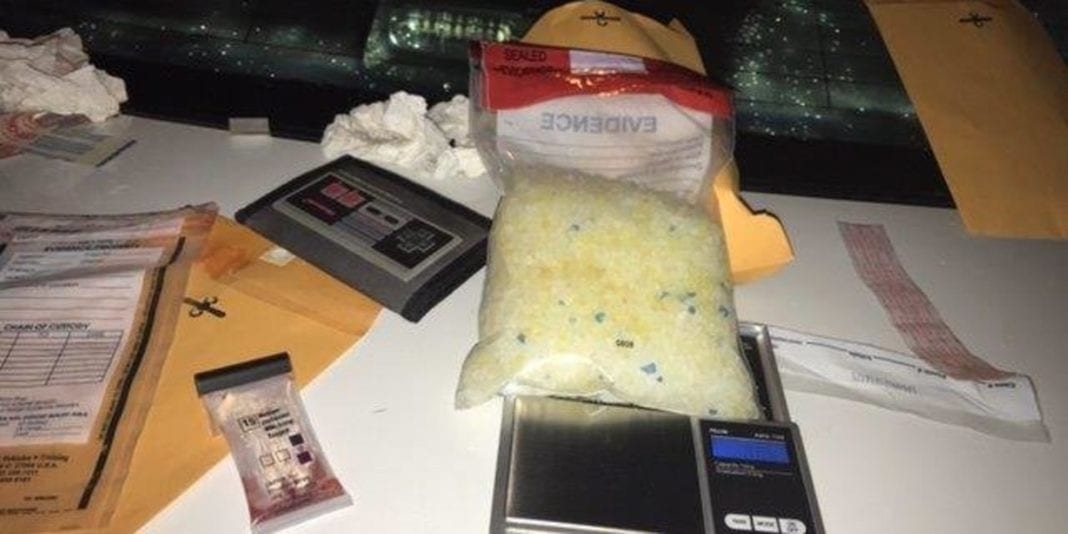 A Texas man says a false positive field drug test resulted in not only his arrest, but significant embarrassment and a bogus reputation as a drug lord.

I was wrongly accused for this and Im going to do everything in my power to clear my name, 24-year-old Ross Lebeau told Houstons KTRK-TV.

On Dec. 5, LeBeau, of Cypress, was reportedly driving his 2006 Acura in the Copperfield area when he allegedly made a right turn without signaling. He was pulled over by a deputy with the Harris County Sheriffs Office.

The routine traffic stop turned into a criminal investigation when the deputy, according to a sheriffs office press release, spotted a sock containing almost half a pound of small clear, blue and gold colored nuggets. The deputy suspected the substance was methamphetamine. He confirmed his suspicions – or so he thought – when he placed a small sample in a field drug test and it tested positive for narcotics.

They thought they had the biggest bust in Harris County, said Lebeau, who was booked into the Harris County Jail for possession of a controlled substance. This was the bust of the year for them.

A press release issued by the sheriffs office after Lebeaus arrest stated he had denied any knowledge of the methamphetamine that was found in his vehicle.

The sheriffs office also patted themselves on the back, stating the arrest may have kept our children and loved ones free from being introduced to drugs.

The deputy was credited for using his knowledge and expertise to take a criminal off the streets.

When Lebeau met with his court-appointed attorney, George Reul, he explained the substance identified as drugs was actually cat litter. He said his father gave it to him in an effort to keep his windows from fogging up.

The so-called sock trick is nothing new. AsLifehacker.comnotes, a well-placed pair of socks filled with some kitty litter will absorb moisture and can help prevent vehicle windows from becoming coated in frozen fog.

Reul told KTRK-TV authorities almost scoffed and laughed when he explained the situation to them.

The case remained a he-said-she-said until last week, when the Institute of Forensic Science conducted its own tests on the suspected drugs. Those tests, according to a report by the agency, found it was not a controlled substance.

Charges against Lebeau were dropped on Jan. 4.

Lebeau says that while the dismissal has cleared his criminal record, the damage to his reputation is irreparable.

People have been calling me kingpin or drug lord, he said.

Lebeau said hed like an apology from police. He also told The Houston Chronicle he wants authorities to stop using cheap, mass-produced tests in the field.

Go the route that is going to protect the people, Lebeau said.

Field tests for drugs can often be incorrect. In a Nevada study, authorities re-examined a number of field tests conducted from 2010 to 2013 and found that 33 percent of them had resulted in false positives, KUTV News recently reported.

Several notable cases have been reported by The Huffington Post in recent years. Among them is a Florida man who spent 10 hours in jail after authorities mistook doughnut glaze for crystal methamphetamine, and a Georgia woman who was held behind bars for a month after cops mistook SpaghettiOs for methamphetamine.

One month prior to Lebreaus arrest, a Utah coupleslife was left in shambles after Arkansas authorities mistakenly identified bags of baking soda as $300,000 in cocaine. The couple was jailed for two months, lost their jobs and suffered financial hardship as a result of the false arrest.

In Harris County in 2015, 41 of 73 drug crime exonerations involved people arrested on the basis of field tests, The Dallas Morning News reported.

Despite repeated incidents of unreliable test results, authorities in Texas and throughout the U.S. continue to rely upon them.

In regard to Lebreaus case, the Harris County Sheriffs Office has not issued an apology, not removed his mug shot or arrest report from the Internet, and stands by their handling of the case.

All indication shows that the deputies followed basic procedures and followed established protocol related to this incident, the agency said in a statement to HuffPost.