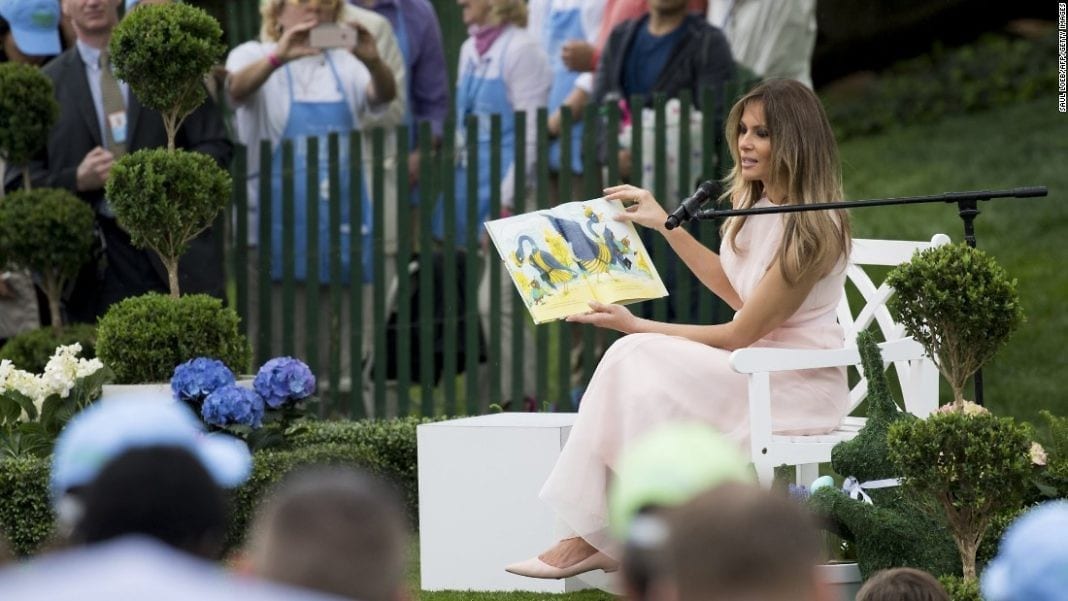 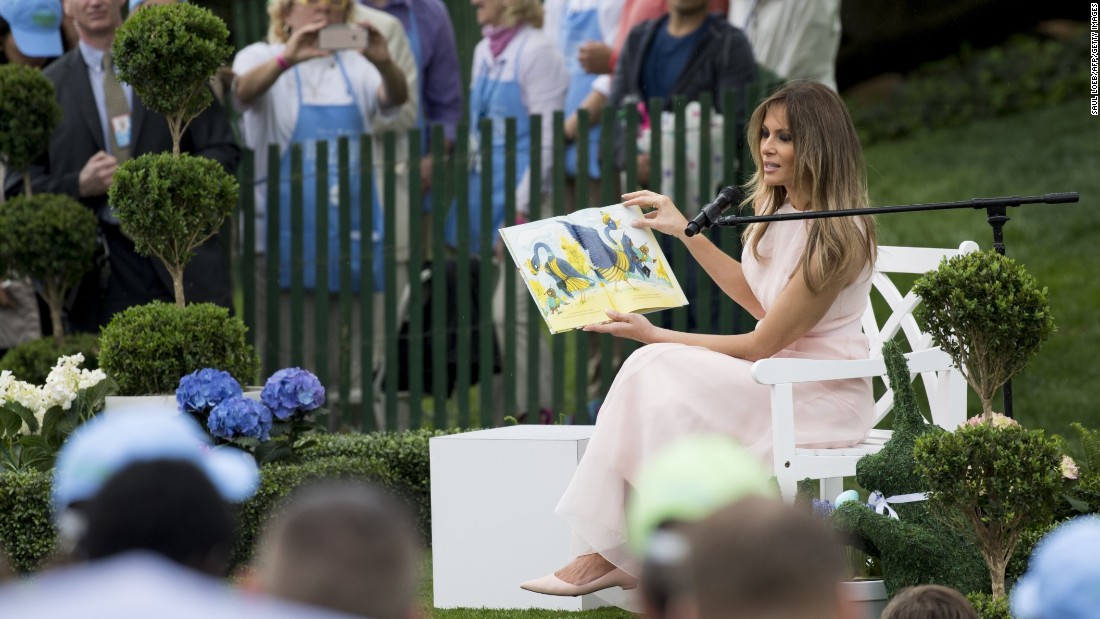 First lady Melania Trump, hosting the 139th annual White House Easter Egg Roll, kicked off the event alongside President Donald Trump, calling it a “wonderful tradition.”
“As we renew this tradition, thank you for joining us. On behalf of the President and Barron, we wish you great fun and beautiful days coming ahead of us,” she said, also thanking the military band, White House staff and egg roll volunteers for their help.
Trump, in his suit and signature red tie, also thanked the crowd of attendees gathered below the White House balcony. 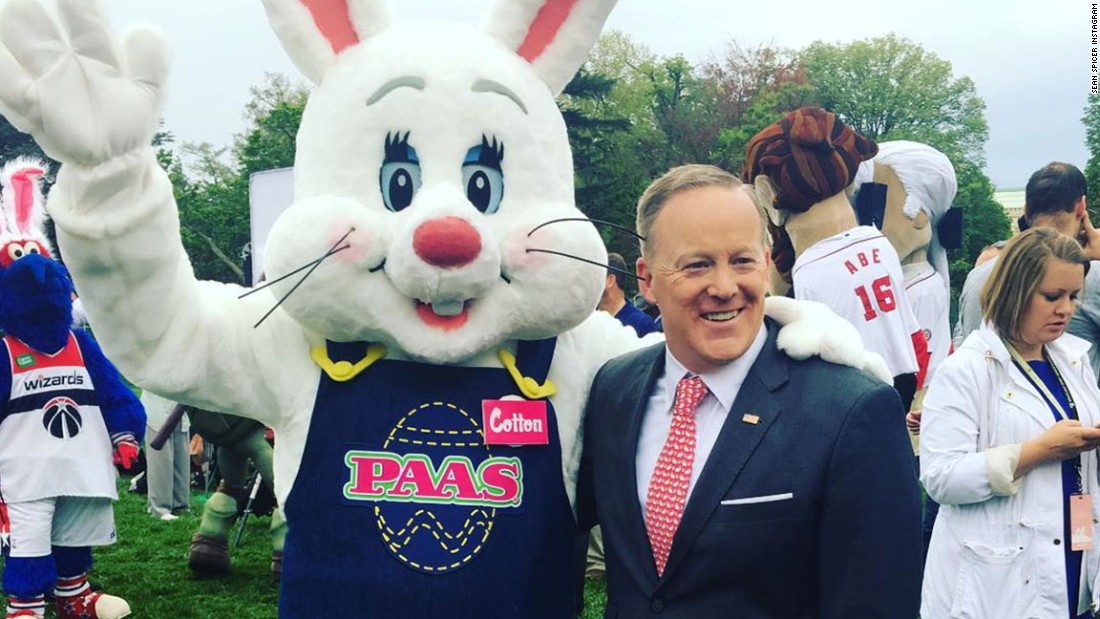 “We’re going to come out and join you and enjoy your company for a roll, a great Easter egg roll. And I don’t know if people are going to be successful, but I know a lot of people down there are going to be successful. I’ve seen those kids, and they’re highly, highly competitive,” he said.
The formal event kicked off at 7:30 a.m. ET, with multiple waves of guests arriving in two-hour increments. There will be activities, entertainment, and, of course, the actual egg roll, in which children race wooden eggs with a spoon.
“Looking forward to hosting the annual Easter Egg Roll at the @WhiteHouse on Monday!” Trump tweeted Friday afternoon alongside a pastel watercolor image of the South Lawn.

The White House Easter Egg Roll gives each first lady the opportunity to put her thumbprint on the lighthearted, family-focused event. This year, Trump’s event will mark a return to tradition.
“It’s a huge opportunity for an administration to put their mark, their seal on how the egg roll goes,” said Tommy McFly, a Washington radio personality who emceed the event for six years under the Obama administration. “The stakes are very high. It shows the first lady’s office and the visitors’ office — it really is their moment to shine, but the eyes of the country are on it, as well.”
The first lady did a lot of research on previous White House Egg Rolls as she planned the event, her staff says.
“She wanted to get back to the tradition, so we’re bringing back some traditional elements, like military bands, and focusing on the family itself,” Stephanie Grisham, Melania Trump’s communications director, told CNN. 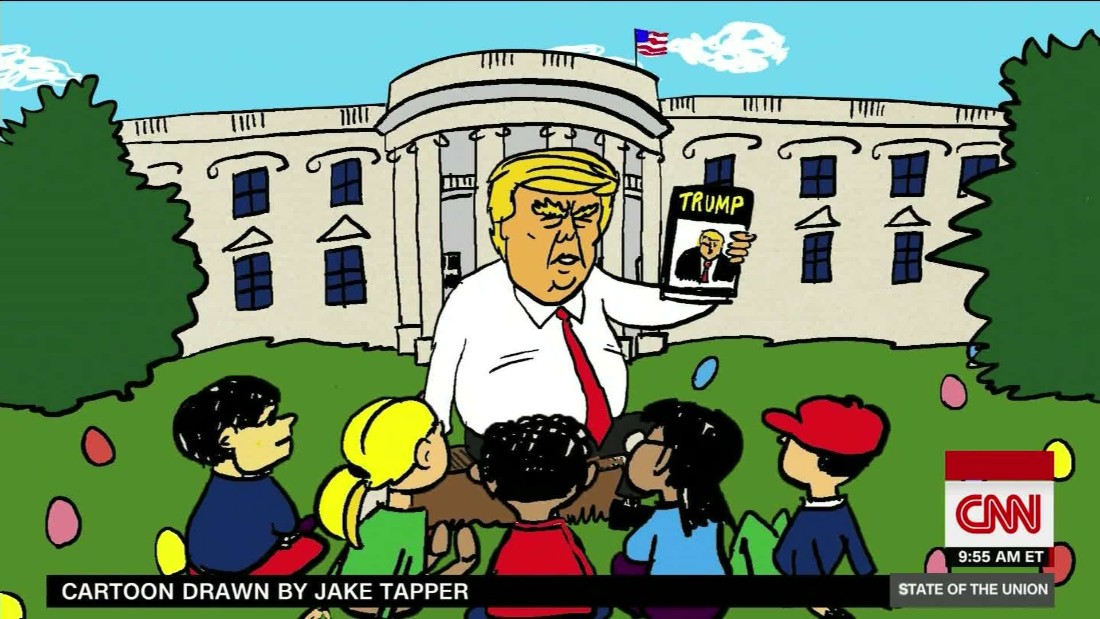 Those traditional elements include the egg roll, an egg dying station, a cookie decorating station, an art wall, a thank-you card station where children can write notes to troops and veterans, and a reading nook.
Melania Trump made a stop at the reading nook, where she read Kathie Lee Gifford’s children’s book, “Party Animals.”
“Did you know about the book?” Trump, seated on a small, grass-covered stage, asked the children.
“I really like the book because it shows that we are all different, but we are all the same,” she said as she began reading.
Egg rolling proved to be one of the least popular activities. Children lined up for an egg hunt, decorated cookies, wrote letters to the troops, participated in a Minecraft coding activity with volunteers from Microsoft and visited characters, including several Easter bunnies.
Sesame Street’s Elmo was another popular character, prominently clad in an oversized PBS button. (Trump’s proposed budget eliminates funding for the Corporation for Public Broadcasting.)
Volunteers handed out hard-boiled eggs on sticks. The Marine Band played selections from Sesame Street, the Muppets and Disney movies.
Attorney General Jeff Sessions and White House press secretary Spicer stopped by the reading nook to read some children’s book classics. First daughter Tiffany Trump is scheduled to read later in the day, according to a tweet from her mother, Marla Maples.
“So proud of my beautiful daughter @TiffanyATrump she offered to read a story to the children 2day @WhiteHouse & will be sharing sweetness,” Maples wrote.
The DC United Soccer team will do soccer demonstrations, a nod to 11-year-old first son Barron’s passion for soccer. Other members of the Trump family are expected to attend as well.
Tickets were allocated to schools, children’ hospitals and military and law enforcement families, as well as the families of White House staff, according to Spicer.
Planning an egg roll is a tricky balancing act, a collaboration between the East Wing, the White House Visitors’ Office, and volunteers.
“The Easter Egg Roll is one of the most visible events and a time when the White House is showcased to a large number of people. And it’s special because it’s not just dignitaries, it’s regular people and local schoolchildren,” said CNN contributor Kate Andersen Brower, author of “First Women: The Grace and Power of America’s Modern First Ladies.”
She added: “(Melania Trump) has big shoes to fill when it comes to an event like this. Michelle Obama was a natural with kids.”

The White House is expecting fewer guests than in recent Egg Rolls — more than 35,000 people attended 2016’s event, the Obama’s seventh and final Egg Roll, including Beyonc, Jay-Z and their daughter, Blue Ivy Carter.
“We’re really focused on quality of the experience over quantity of attendees,” Grisham said.
There had been small warning signs that things might not have gotten off to the fastest start. Wooden egg manufacturer, Maine’s Wells Wood Turning, had to gently remind the White House of the ordering deadline via a tweet in late February.
“FYI manufacturing deadlines for the Easter eggs are near. Please reach out!” the account wrote.
McFly said in years’ past it was “one of the Visitor’s Office’s marquis events,” and he would get contacted “months in advance.”
“There was no outreach from the Trump East Wing staff to find out how the Easter Egg Roll had been run in the past as of February, when these discussions should have been well underway,” Andersen Brower said.
Nevertheless, all the asks — and eggs — were made.
Wells Wood Turning crafted 18,000 custom commemorative wooden eggs that will be given to each child in attendance. They arrived at the White House last week in five colors, including, naturally, a shiny gold.
“They’re amazing hosts. I think people will see,” she said of the Trumps. “(Melania Trump) is super thoughtful, and she takes her time with things … Her team is amazing.”

The egg rolling tradition began in the 1870s on Capitol grounds. After a particularly rotten 1876 roll, President Ulysses S. Grant signed legislation to protect Capitol grounds, which prohibited egg rolling, per the National Archives.
But in 1878, President Rutherford B. Hayes allowed children to roll their eggs on the White House South Lawn, and 139 years later, the tradition continues.
It’s always been quite a production for the first lady’s office.
Florence Harding wore a feathered hat in 1922. Grace Coolidge brought her pet raccoon, Rebecca, in 1927. Eleanor Roosevelt oversaw the egg roll during her husband’s four terms in office, including 1937, when more than 50,000 children attended.
The tradition of the costumed Easter Bunny began with a Pat Nixon staff member in 1969, per the White House Historical Association.
Spicer has a history with the Egg Roll himself: as a staffer in the George W. Bush administration, he was the man inside the Easter bunny suit.
Asked whether he’d reprise the role at a recent press briefing, Spicer laughed.
“I think we’re going to have an egg-cellent time,” he joked. 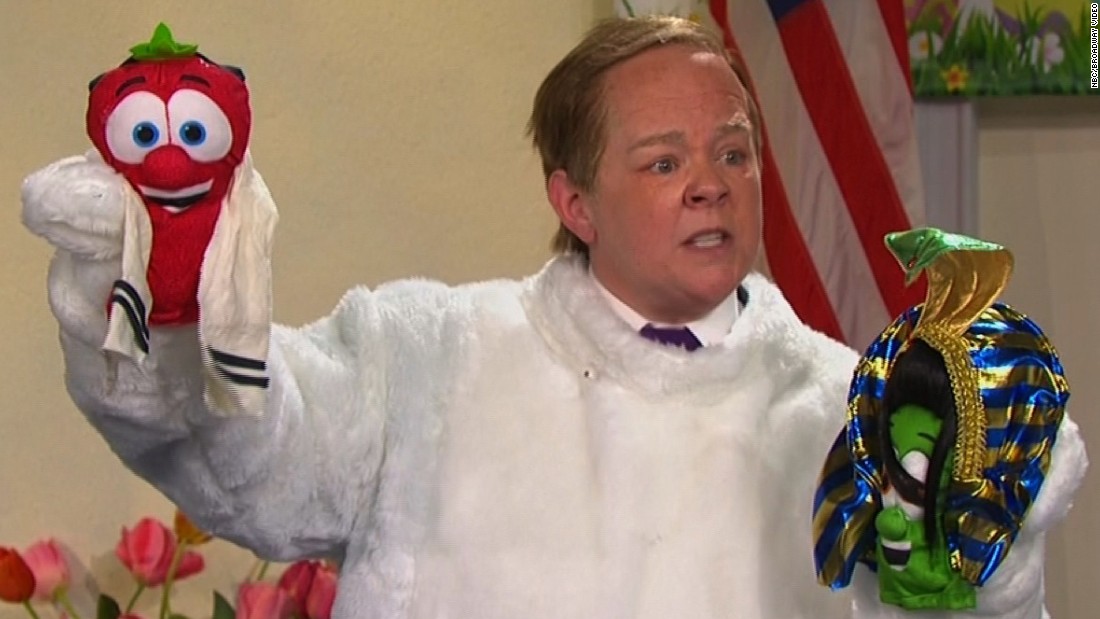 Spicer gets in the Easter spirit on ‘SNL’

In recent years, the Obamas hosted star-studded egg rolls. Pop star Fergie was the musical guest in 2009, and performers over the years included Justin Bieber, Janelle Monae and Ariana Grande. Professional athletes were also participated in sports activities stations around the South Lawn.
Michelle Obama also took the opportunity to promote her “Let’s Move” initiative with the event, hosting a “fun run” race around White House grounds in 2016, and participating in other activities aimed at getting kids active.
The Obama administration enlisted C3 Presents, an event production company that worked on its campaign events, as well as the Lollapalooza music festival, to help produce the egg roll, per McFly. This year, the Trump administration has teamed up with Harbinger, an event planning company whose portfolio includes the Papal visit, the Google media filing center at the 2016 GOP debates, and the Romney for President campaign.
“The Obamas did social events up bigger than the Bushes did, and they had a celebrity quotient that we didn’t see with the Bushes,” said Andersen Brower. “The inaugural balls gave a taste of how difficult it will be for the Trumps to attract that kind of A-list talent.”
Entertainment this year included military bands, as well as Martin Family Circus and boy band Bro4.

More than 21,000 adults and children were expected on the South Lawn for the festivities.
But first, a bit of a scramble.
With the White House Easter Egg Roll approaching, and just a skeleton crew in the East Wing staffing roster, volunteers were needed, stat. Answering the all-hands-on-deck call this weekend were more than 400 registered volunteers, many of them locals, according to a staffer familiar with the plans.

Most of the volunteers had already attended one of the four volunteer orientation sessions that have been taking place over the past two weeks at the White House, organized by the Visitors Office.
Led by new social secretary Rickie Niceta Lloyd, staff got to work, deadline looming, with warm welcome for the free assistance from those donating their time, readying the People’s House for an onslaught of more than 20,000 anticipated visitors on Monday.
Part of the prep happened this Saturday, when 100 or so volunteers worked elbow-to-elbow in a fenced-in, tented portion of the Ellipse, behind the South Lawn of the White House. Creating a lengthy assembly line, they spent hours stuffing candy, coloring books and commemorative eggs into goodie bags for families attending the roll.

A great day at @whitehouse for the 139th #EasterEggRoll #whitehouse

According to a source who participated in the preparation the weekend, the volunteers — many holdovers from years’ past and former administrations — arrived at 10 a.m. ET, working alongside Visitors Office and Social Office staffers. Truckloads of donated products were unpacked, grouped and placed into their designated spots, said one volunteer team leader. The items included arts and crafts supplies, as well as non-perishable foods. And yes, the source confirmed, there were also Peeps.
By the end of the afternoon, thousands of bags were completed, with the goal each child will receive a souvenir goodie bag and commemorative egg, added the source.
“Everyone at the White House is very excited about (Monday’s) Easter Egg Roll. Preparations are continuing through the weekend to ensure that every child who attends has a positive experience they’ll remember for years to come,” said Grisham.

How to Make Your Own Auntie Anne's Pretzels at Home

Your Acceptance Letter For Being Placed Into The ‘Cute Girl’ Category

How to use your food ‘waste’