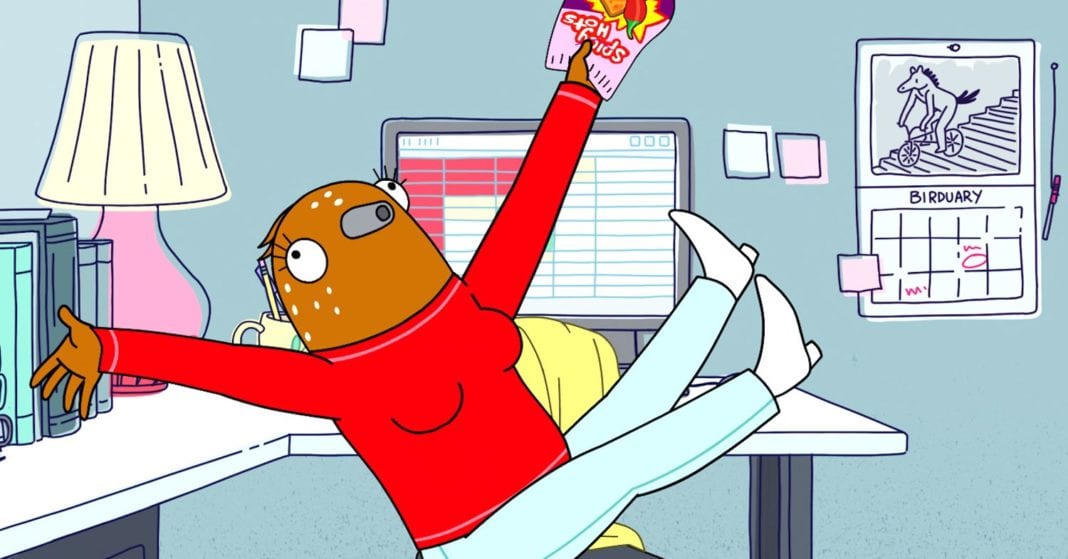 In Birdtown, the ersatz New York City of Neflix’s new adult cartoon, Tuca & Bertie, even the buildings have boobs. One half of the titular duo, Tuca, a toucan with the body of a human woman, wears only short-shorts and flashes her date—twice. The other, a song thrush named Bertie, has a left boob that gains sentience (and eyes, a mouth, and legs) and opts to leave Bertie’s body altogether after she is sexually harassed by a coworker.

Often, sexualized cartoon women have an ick to them, even when they’re anthropomorphized animal women. It’s like you can see the cartoonist’s fantasies straining as hard as his characters’ buttons. No one is coming to Tuca & Bertie for an animated eyeful. Tuca & Bertie’s boobs are like drunk-roommate-at-three-in-the-morning boobs or is-this-a-zit-or-a-lump boobs. The tits of adult(ish) female friendship.

See, Tuca & Bertie’s creator is a woman: Lisa Hanawalt, a cartoonist and the production designer behind Bojack Horseman. Adult cartoons created by women are uncommon—Hanawalt and Twitter have been trying to come up with examples all week and have only identified Daria, Hey Monie!, and a few other shows that were swiftly canceled. Advance coverage of Tuca & Bertie has positioned it as the solution. While you’re watching the show itself, though—basically Bojack meets Broad City—you’ll often forget there’s anything especially radical or surreal here.

The easy criticism of Tuca & Bertie is that it cleaves to the classics. Tuca, voiced by Tiffany Haddish, is chaos: lovable and extremely confident but messy and gross, an adulting incompetent. Ali Wong’s Bertie is order: a neurotic yuppie with a penchant for fussy French pastry. They’re quirky opposites linked by friendship and an ampersand, a combination your subconscious has been told is charming by 50 years of sitcoms: The Odd Couple, Kate & Allie, Will & Grace, Grace and Frankie. Some of the show’s bits—like Tuca leaving an irritating box of junk in Bertie’s apartment or trying to de-stress Bertie in a way that proves stressful—are traditional.

But the opposites-attract setup really is charming and relatable, and each decade’s update to the formula is telling. The Odd Couple is a story of ’70s masculinity, a push-pull between a slobby Peter Pan and a (female-coded) uptight neat freak. Kate & Allie is have-it-all ’80s femininity: a travel agent and a stay-at-home mom, both with children. Will & Grace reflects the ’90s and ’00s negotiations not just of gender but of sexuality. Grace and Frankie adds age and class and race and drugs to the mix.

As we sit on the edge of the 2020s, we get Tuca & Bertie. Tuca is a gig worker on a TaskRabbitish platform called ChoreGoose, and Bertie is a data processor at Conde Nest who aspires to be a senior operations analyst. They’re birds who live in a city where the fast train is a giant snake and the slow train is a giant gooey snail. It just feels right.

Tuca and Bertie’s tension isn’t about gender presentation or artsiness or even cleanliness. It’s about the degree to which they’re OK with unpredictability. Bertie tries to climb the ladder at Conde Nest despite harassment from roosters in polo shirts and because starting a new career in her true passion, baking, seems unfeasible. “I start a new career every day!” says Tuca, who relishes the freedom of being her own boss (but then talks about depending on checks from a rich aunt). Welcome to the millennial job market.

Everything about Tuca & Bertie manages to balance traditional and alien moments. In the first episode, an accident befalls Bertie’s boyfriend’s grandmother’s ashes (a classic), Bertie and Tuca go on a ridiculous quest to get them back (familiar), and the ashes get baked into a cake inhabited by the grandmother’s ghost (what?). Hard topics like Tuca’s alcoholism and Bertie’s workplace harassment don’t resolve sitcom-smoothly—but there are boobs everywhere, so.

Queensland floods: 500,000 cattle survived years-long drought only to die in the rain

7 World-Famous Movie Props That Were Just Thrown Away

9 Gooey Desserts To Stimulate With Your Leftover Easter Candy