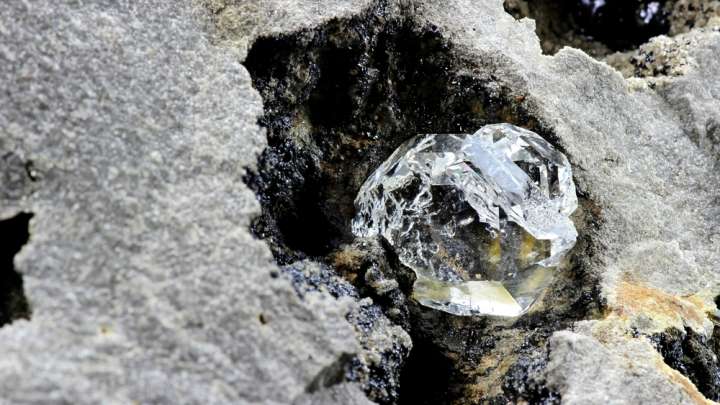 Researchers from the University of Alberta in Canada have discovered a mineral previously unknown to science in the center of a shiny diamond – and it could change what we know about Earth’s mantle.

Named Goldschmidtite in honor of the Godfather of modern geochemistry Victor Moritz Goldschmidt, the new mineral is documented in the journal American Mineralogist this week.

Only a single tiny grain of the deep green mineral can found in the center of the diamond located in a bed of kimberlite rock in South Africa. Using a series of geological tests, PhD student Nicole Meyer and a team of experts worked out that the diamond was formed some 170 kilometers (105 miles) underground at a temperature of 1,190°C (2,174°F).

Just as this specimen appears to have been, most natural diamonds were “cooked up” billions of years ago in the Earth’s mantle. Since this new mineral is locked in the middle of a diamond, we can assume it was created in these baking depths too. However, when researchers explored the chemical signature of the mineral, they noticed it had a signature you wouldn’t expect to see if it was forged in Earth’s mantle.

Earth’s mantle is vast – over 1,800 kilometers (1,120 miles) thick – and marks the chunk of silicate rock between the crust and the core. Scientists actually know surprisingly little about this huge part of our planet as it’s found dozens of kilometers below the Earth’s surface underneath its crust. As such, scientists rely on minerals to study the potential chemical processes and conditions that exist here.

Taking into account the composition of goldschmidtite, out understanding of Earth’s mantle may be a little off the mark.

“Goldschmidtite has high concentrations of niobium, potassium, and the rare earth elements lanthanum and cerium, whereas the rest of the mantle is dominated by other elements, such as magnesium and iron,” study co-author Nicole Meyer, a doctoral student at the University of Alberta, said in a statement. “For potassium and niobium to constitute a major proportion of this mineral, it must have formed under exceptional processes that concentrated these unusual elements.”

The toilet always smells fresh and stays clean. Everyone wishes that!

35 Times Elf on the Shelf Got REALLY Weird

‘A different way of living’: why writers are celebrating middle-age

Hard avocados? Here’s the best way to speed up the ripening process