Five men believed to be connected to the murder were killed by police, but authorities now say that case against them is weak 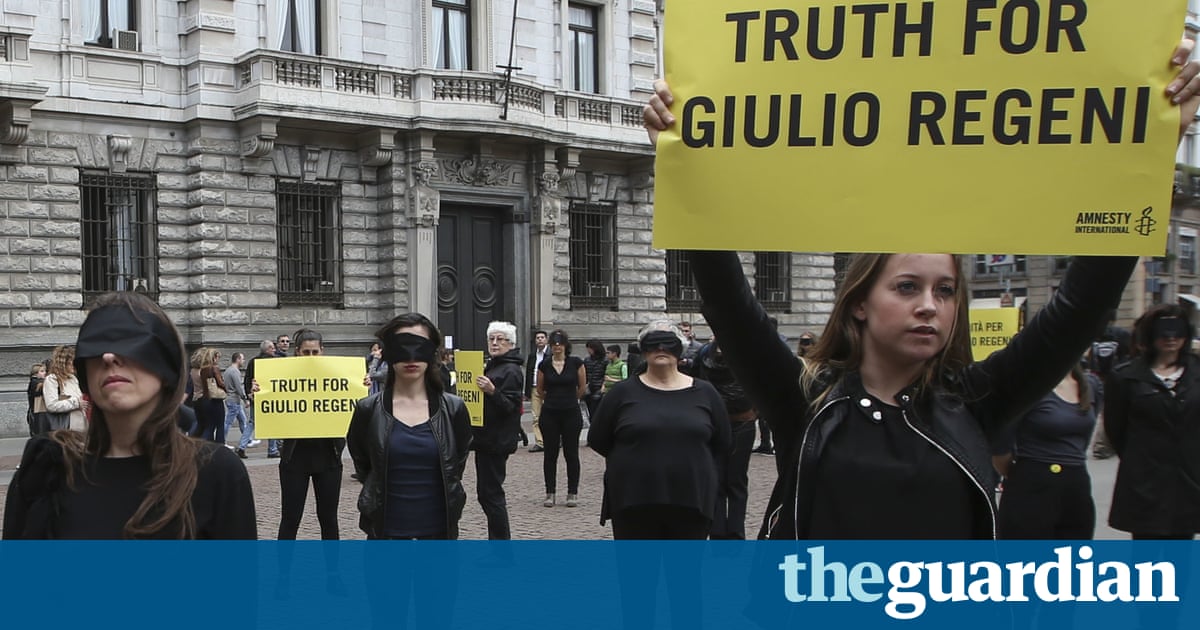 His passengers that day three members of a single family and a close friend of theirs were known to be petty criminals and had a history of run-ins with the authorities. Two had served time in jail for stealing a wallet in 2001 and one had been a drug addict. The mens relatives say they were heading to a decorating job in the suburb of Tagammu al-Khamis, but the group never made it to their destination.

They were killed in a hail of police gunfire. Within hours of their death, Egyptian authorities accused them of being part of a gang of thieves that targeted foreigners, and an alleged house raid linked them to a heinous act: the torture and murder of an Italian researcher named Giulio Regeni. The battered and disfigured body of the 28-year-old Cambridge PhD student, who was pursuing sensitive research in Egypt, had been found in a roadside ditch between Cairo and Alexandria seven weeks earlier.

Pro-government media quickly published graphic pictures of the blood-spattered bodies of the five dead Egyptians Tarek Saad Abdel Fattah, 52; his son Saad Tarek Saad, 26; his son-in-law Salah Ali Sayed, 40; Mostafa Bakr, 60; and Farouk. Egypts interior ministry said the men died in a shootout with police, even though the pictures showed no guns inside or around the minibus and witnesses described the men as trying to flee when the police opened fire. The bullets so disfigured Farouks face that his fiancee initially said he was unidentifiable.

Soon after that, the ministry said that Regenis belongings including his passport and a wallet had been found in the home of one of the accused, who in death was unable to defend himself.

In Egypt, officials may have had reason to hope that the identification of Regenis alleged killers would put the case to rest. Experts and Italian officials had suspected from the outset that elements of the Egyptian state had carried out the murder, despite the governments staunch denials. The murder led to a major diplomatic incident between the two countries.

In Rome the story that the men in the minibus had killed Regeni immediately smacked of a cover-up, according to a senior Italian official, and was quickly disregarded. Now, following months of acrimony between Egyptian and Italian officials over the still unsolved murder, the shooting has become a mere footnote in the tragedy.

Egyptian officials have admitted that the group were unlikely to have had any involvement in Regenis killing. Egypts public prosecutor, Nabil Sadek, said earlier this month that while the case was still under investigation, the link between the five men and Regenis death was weak.

After initially recalling its ambassador to Egypt at the height of diplomatic tensions, Italy has since announced a replacement, though in a sign of the still-frosty relationship he has not yet been sent to Cairo.