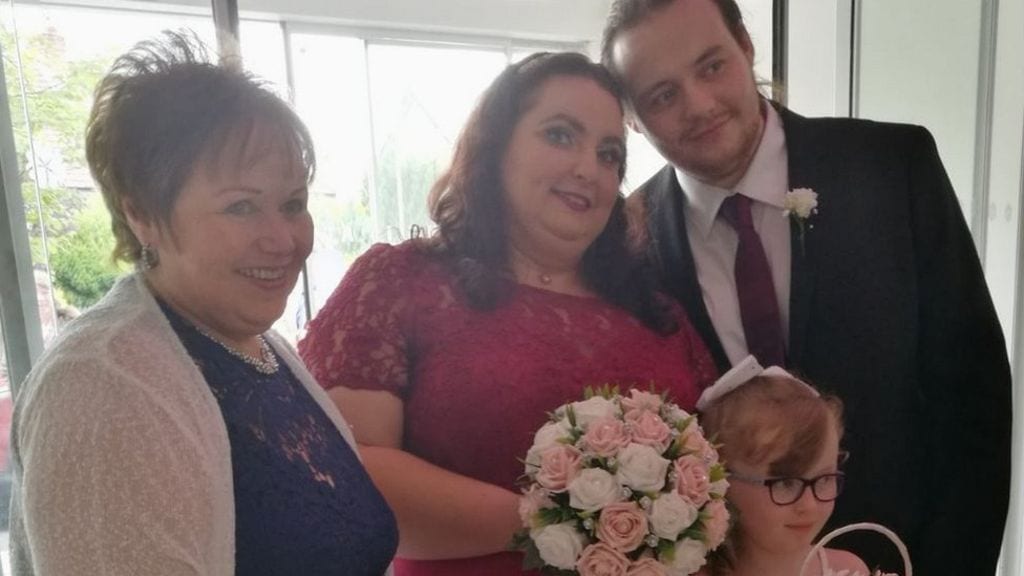 Most couples spend months, even years, preparing for their big day.

But not Gillian and Craig Kelly – they were given an hour-and-a-half’s notice before saying “I do”.

The couple used to joke that horticulturist Gillian would probably be in her wellies and rocker Craig in his leathers when they finally got around to it, and that is exactly what happened.

They imagined their wedding taking place on the beach at Castlerock but they ended up tying the knot in the Northern Ireland Hospice, at Gillian’s mum’s bedside.

Gillian’s Disney-mad, poetry-writing mum Margaret Simpson has cancer of the liver, bowel and colon, and she has been living in the hospice since May.

The 57-year-old started to deteriorate last week and on Thursday, hospice staff asked the family if they had any more memories left to make.

When Margaret was first diagnosed, she said she would like to see her eldest daughter get married and so Gillian knew that simply had to happen.

They started planning the wedding for a week’s time at the hospice on Belfast’s Somerton Road, heading immediately to the City Hall for emergency marriage licences.

“We decided to get married at two o’clock last Thursday, and we were ordering cakes by 3.30,” she said.

“On the way home from the hospice, I stopped to get craft supplies and invites were posted on Friday morning”.

However, staff became concerned that Margaret was getting too excited – she was inviting all the doctors and nurses, and insisted on getting out of bed to make as many paper flowers as she could during art therapy.

They wanted Gillian, 33, and Craig, 27, to “stagger the celebrations” and last Friday afternoon, the couple were told the chaplain had limited availability.

“I phoned Craig and told him to get down to the hospice as we were getting married in an hour. I needed a shower and was still in my gardening wellies but I just borrowed some deodorant and moisturiser from mum.

“It was a lovely service. Then my dad went out and got donuts and Buck’s Fizz”.

However, there was not much time for celebrating, as the couple had to get “married again” in six days’ time on Thursday 6 July.

The venue was the same but this time, they had the whole “kit and caboodle” – 40 guests, three cakes, two chocolate fountains, a DJ, orders of service and favours.

They had two flowergirls – Craig’s six-year-old daughter Sammie and Pip, the family’s rescue Jack Russell, who looked the part in a grey bow.

In addition to the hospice – they provided the venue, the catering and the music therapist played the flute as they walked in – Gillian said her friends and families rallied to the cause, decorating the room, offering their services up as hairdresser, make-up artist and photographer.

“The hospice staff were out of this world,” she said.

“What they did for my mum was above and beyond. The nurses who looked after her all day weren’t even meant to be in work. How am I meant to thank them? A box of chocolates and a card are not going to do it.

“My mum was glowing. There wasn’t a dry eye but they were happy tears.

“It was just magical. It could not have been any better had we spent months planning it.”

Gillian, a horticulturist, said the most important thing was having all her family there.

She said they were generally a “well family” but within nine months, her dad’s diabetes had worsened, her sister had been diagnosed with relapsing remitting MS and she is now waiting on a pacemaker after being diagnosed with heart failure.

Then her mum started to feel unwell in September.

“Our world stopped when we heard she had terminal cancer. Our illnesses were manageable, liveable. No-one gets out alive but mum is only 57.”

They were nervous about their mum going into the hospice, which provides care to more than 3,500 children and adults with life-limiting or terminal conditions every year. but Gillian says it has “given her a life”.

“It sounds so ridiculous and obviously no-one wants to be there but the fact she is there is a godsend.”

26 beautiful photos from Lunar New Year celebrations around the globe.