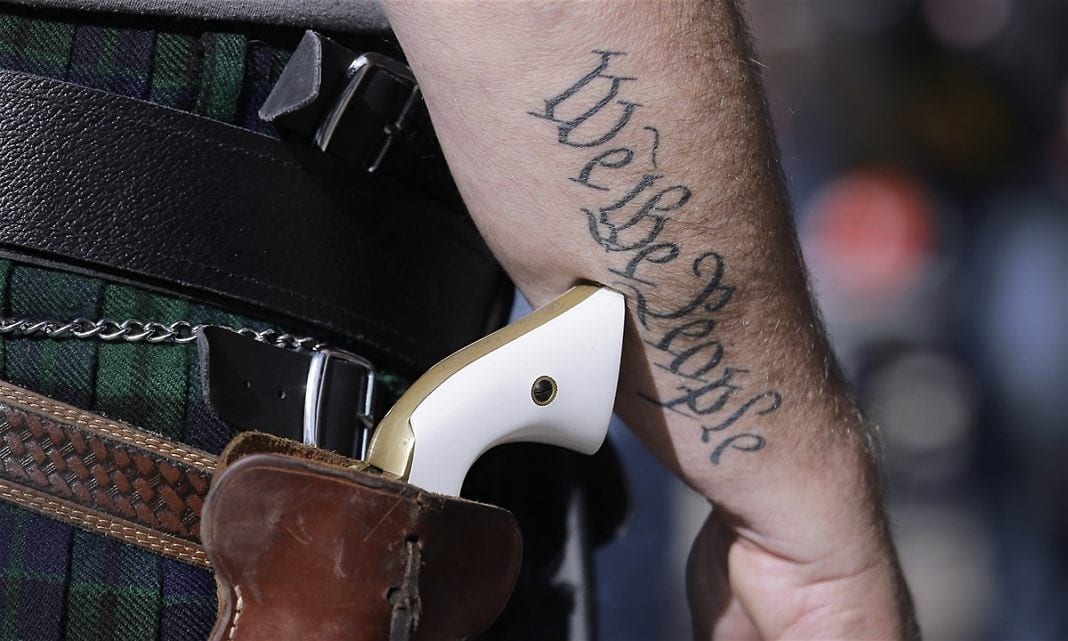 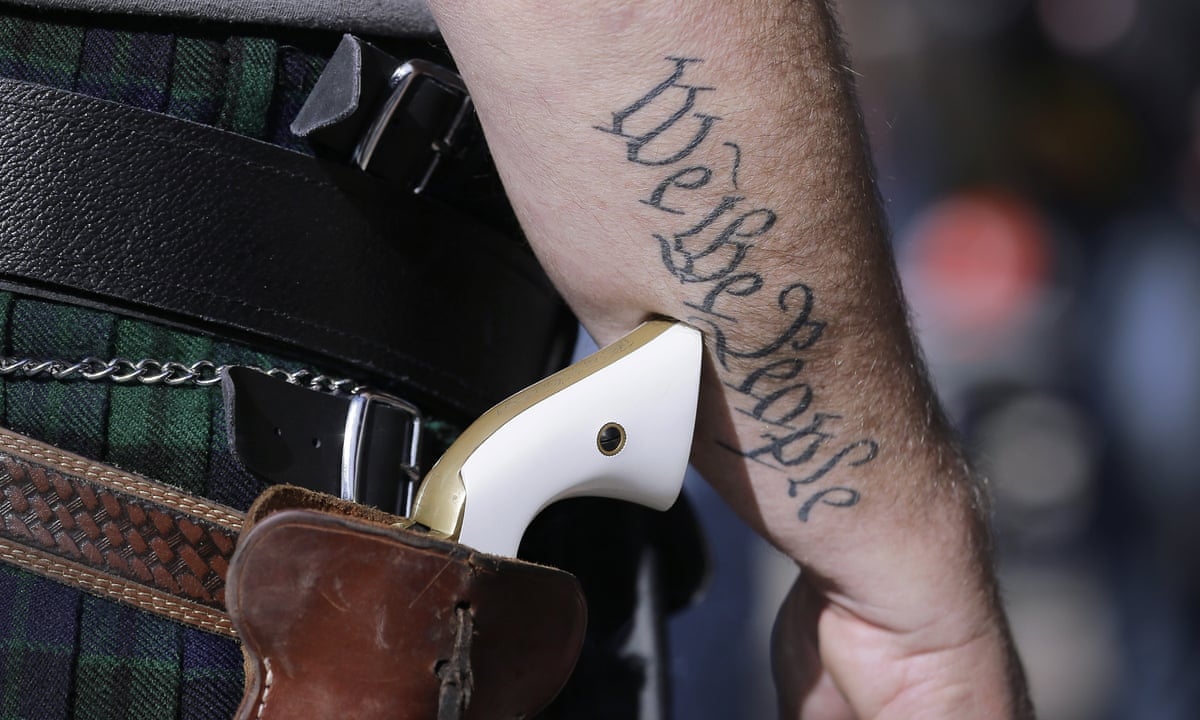 As a gun owner, Angela Turner is not anti-firearms. She simply does not want to take her three young children out for a meal and feel like the family has stepped into a wild west saloon.

Despite its reputation as the heart of gun-toting cowboy culture, compared with most states Texass gun laws have always been relatively restrained. Until now: as of Friday, the Lone Star State is the most populous state in the country, and Houston and Dallas the largest cities, to allow the visible carrying of handguns.

That means that licensed Texans will be able to stroll with holstered pistols in most public places and supportive businesses, from hardware stores to diners to churches.

Its not about taking away peoples second amendment rights, said Turner, of the Texas chapter of Moms Demand Action for Gun Sense in America, of her opposition to the law.

Its about whether when Im taking my children to a restaurant, if Im having to assess whether a gentleman who walks into a restaurant with a gun on his hip is using it for his own personal safety, whether he intends to hold up the restaurant, or whether he might lose his temper later on.

Once the initial surprise at seeing more guns in public has faded, and it becomes unremarkable to walk past someone with a Smith and Wesson picking up a milk carton in a San Antonio supermarket, Turner is worried that her children will grow up in an environment where displaying firearms is considered a routine aspect of daily life.

Its not normal to feel like its OK to flash your gun around, she said.

Carrying long guns such as rifles has been a right in Texas exercised in recent years by pro-gun groups holding rallies at public spaces such as restaurants and at protests, including outside a Dallas-area mosque last November.

But the open carrying of handguns was prohibited in the 1800s, in significant part to stop African Americans obtaining weapons after the civil war.

That regulation left Texas firmly in the minority. Open carrying of handguns is only banned in California, Florida, Illinois, New York, South Carolina and the District of Columbia, according to the Law Center to Prevent Gun Violence. Open carrying of long guns is forbidden in six states and DC. Some states impose restrictions such as permits.

While a new gun seizure statute came into effect in California on New Years Day, Texas politicians have aimed in the opposite direction. Greg Abbott, Texass Republican governor, has enthusiastically backed permissive gun laws. In October, underwhelmed by figures showing that a mere 1.2m federal background checks had been made in 2015 on Texans seeking to buy firearms, Abbott tweeted (inaccurately):

After fierce debate about whether police should be allowed to ask apparently law-abiding carriers if they have a license, amid concerns about possible racial profiling and civil rights lawsuits, Abbott signed the bill into law in June at a shooting range near Austin, surrounded by NRA lobbyists.

At the same time he rubber-stamped a law making carrying concealed handguns on public university campuses legal from 1 August 2016. The move has attracted intense opposition from many academics and students at the University of Texas, which in December issued an implementation report that noted the overwhelming sentiment on campus that concealed carry should not be permitted in classrooms, but determined that it would be illegal to stop it.

The report did, however, recommend that guns should not be allowed in halls of residence, with limited exceptions, and that employees with single-occupant offices should make their own decisions. But Texas attorney general Ken Paxton issued an opinion on 21 December stating that banning guns in dorm rooms would break the law, which looks set to face legal challenges in 2016.

The open carry bill redefines Texass concealed handgun license as a license to carry, permitting visible carrying of loaded or unloaded handguns in a shoulder or belt holster in most of the same locations where concealed carrying was already allowed such as the Texas capitol building in Austin, where license holders get to bypass the airport-style security.

At the start of 2015 there were 826,000 concealed handgun license holders in Texas, according to official figures about 4.5% of the population aged 21 and over. In practice the numbers are higher because Texas has reciprocity agreements with most other states. In fiscal year 2015, 212,795 licenses were issued while 1,049 were denied and 903 revoked.

Applicants must be at least 21, pass background checks, pay $140, complete four to six hours of training and take a written test and a shooting proficiency demonstration.

Proponents of open carry argue that they are pursuing their constitutional right to self-defence, that the overwhelming majority of permit-holders behave responsibly and that similar laws in other states have not caused problems.

Critics of the laws reject the claim that more guns equals more safety and believe that the increased prevalence of visible weapons invites accidents, intimidation and uncertainty for the general public and police officers.

People have their own perception of fear

According to the Brady Campaign To Prevent Gun Violence, 561 people are shot dead by accident in the US per year on average and 16,334 people are shot unintentionally but survive. Two men were injured at a supermarket in Alabama last October when a shoppers gun fell to the floor and went off.

A woman was accidentally shot dead by her two-year-old son in an Idaho Walmart in December 2014 after he reached into her purse and found her gun while sitting in a shopping trolley.

Last year, a survey found 75% of Texas police chiefs oppose the concept. Anticipating an increase in 911 calls, McClellands department is advising concerned citizens who spot a gun to consider the context before contacting police for example, where the holder is and whether he or she is acting suspiciously.

Mistakes appear inevitable, whether benign or tragic. When a Colorado woman called 911 last October to report a man walking around with a rifle, the dispatcher replied, according to audio released by police: Well, it is an open carry state so he can have a weapon with him or walking around with it.

An officer was sent first to a different incident. The gunman killed three people.

Given the numerous exceptions and restrictions on where weapons can and cannot be carried, the element of choice for businesses and new regulations making it more burdensome to post signs banning guns, police, private and government entities are working to adapt and make choices.

Amid the sports memorabilia decorating the walls in the Burger Shack Grill in west Houston, a sign informs customers that Guns are welcome on premises. Please keep all weapons holstered unless the need arises. In such case, judicious marksmanship is appreciated.

Next to a notice requesting that diners not wear sagging pants, another sign that takes up almost half the door tells patrons that they are entering an establishment that fully values the second amendment. But at many other restaurants and stores in the city the position is more ambiguous, with either a lack of signage or notices that do not conform to the strict new standards.

The Burger Shack Grills owner said he was not interested in discussing the issue, which is a sensitive one for big businesses fearful of upsetting customers on either side. Unlike Kroger, other major supermarkets such as Whole Foods and H-E-B have indicated they will opt out, joined by Whataburger, the beloved Texan burger chain. In 2013, Starbucks respectfully requested that customers nationwide not bring guns into their stores, a stance echoed by Target the following year.

Weve had many customers and employees tell us theyre uncomfortable being around someone with a visible firearm who is not a member of law enforcement, Preston Atkinson, president and CEO of Whataburger, said in a statement in July.

We have a responsibility to make sure everyone who walks into our restaurants feels comfortable. For that reason, we dont restrict licensed concealed carry but do ask customers not to open carry in our restaurants.

Gary Huddleston, a Kroger spokesman, said the chain would follow state and local laws and to ask customers to be respectful of others while shopping. This is the same policy we follow in the 36 states where Kroger operates stores. We serve millions of customers, and our customers have strong beliefs on both sides of the gun issue. Gun-related legislation is best handled by lawmakers, not retailers.

Guns will remain verboten in courtrooms, bars, schools, secure areas of airports and sports arenas but places of worship can make their own decisions. Benny Holmes, a Houston-area pastor who shot an intruder at the Church of New Beginnings last July then prayed with him, said he would allow open carry, though he would not be wielding a revolver at the pulpit.

When someone walks into your door, prayer just ended, now you have to defend yourself physically so you draw your sword in this case your 9[mm], your .45, or whatever youve got on you, he told KTRK local news.

A thiefs gonna come in and do what he wants to do anyway, the only difference now is that he might get one or two of us, but thats it, because everybody else is packing.

Hey, Mom Judgers! My Boys Run Naked Through the House & I Don’t Care...