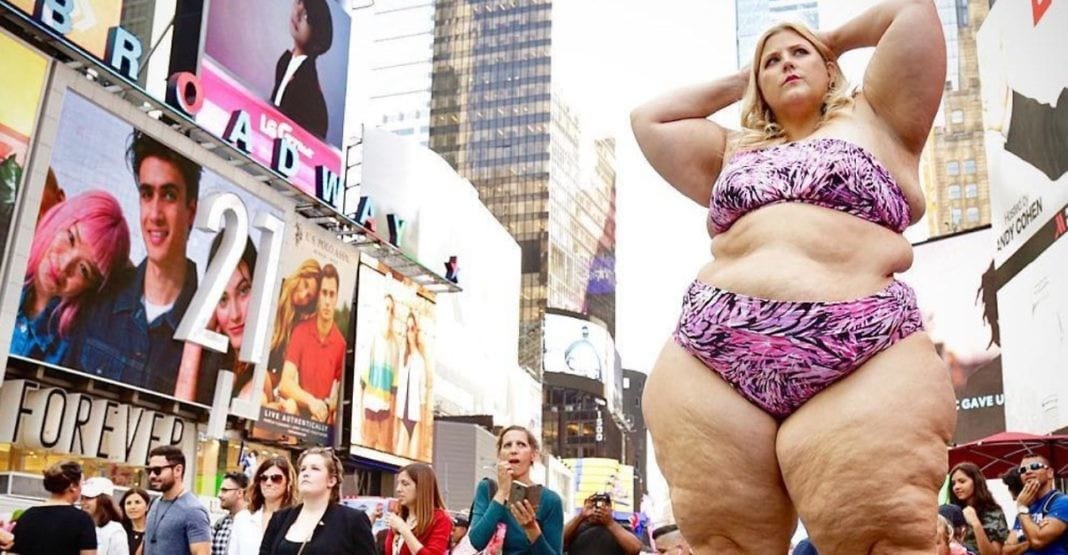 Now that the summer is upon us, people inevitably have to wear less clothing to stop themselves from turning into a puddle of sweat in the heat. Trust me, if you’re a woman, you’ll know just how icky boob sweat can make you feel, and while I’m not in possession of man parts, I’m sure they come with problems of their own in this weather. But stripping down to cope with the heat isn’t an easy task for everyone.

A good reflection of this is the number of memes that have recently surfaced that allow people to poke fun at how their bodies just aren’t ready for summer. My personal favorite is of a woman pretending her tummy flab is, in fact, baking dough and trying to flatten it out with a rolling pin:

All jokes aside, however, we as a society need to move away from the damaging belief that only slim bodies are #SummerReady.

This is something which plus-size model and founder of fashion blog Glitter and Lazers, Anna O’Brien, discovered the hard way when she decided to pose in a bikini in New York’s famous Time’s Square. While she had been expecting to receive negative comments about her weight, the comments that she actually got were a lot worse and demonstrated an even more disturbing problem that plus size women can face.

I say plus size women for a good reason. We have all faced unfair judgment, but anyone who is a member of the fairer sex – or, indeed, has a female body – knows exactly what it feels like to have their worth reduced to their outward appearance by society, and unfortunately, a large number of men.

When I was in my early 20s, I was actually told off by an employer for not coming into work with makeup on – a man who also felt like it was totally appropriate to discuss the fact that he only had one testicle in front of me (yes, I did dub him Hitler in my mind).

This is why the #MeToo movement gained so much momentum last year, causing many men and some women to reflect on their behavior, and there’s no doubt that its repercussions will be felt long into the future. However, given that the shocking comments Anna received in Time’s Square were given to her just last month, it’s clear that we still have a very long way to go when it comes to preventing sexual harassment.

Recalling what it was like to expose herself in a bikini in such a public place, Anna wrote on Cosmopolitan, “No more time for nerves – it was now or never. ‘Let’s do this,’ I said out loud. My clothesdropped all the way to the ground, and the voices around me became clear.”

The plus-size model then quoted the comments she received, and they will fill you will disgust for humanity as a whole.

“I want to suck on them tasty toes,” remarked one man passing by.

Another added, “Hey baby, let me butter them biscuits for you.”

As if that wasn’t already bad enough, men then began to film Anna without her consent, and when she made eye contact with them, one said, “Twerk for the camera baby, show them how that ass clap.”

Needless to say, this caused the model to feel incredibly self-conscious and she began to well up.

No stranger to being fat-shamed on social media, Anna had expected to receive negative comments about her weight, but this was the first time that she had witnessed people openly fetishizing her for her size. And she was horrified. Although she did acknowledge that she deliberately chose to pose in such a public place for a reason, having been given the option of staging the photoshoot literally anywhere in New York.

Explaining why she chose to have the photoshoot in such a public place, Anna continued on Cosmopolitan, “The world only really sees plus imagery that is perfected and somewhat vanilla – usually that of smaller, perfectly proportioned curvy women.”

“It didn’t need another stock image of an hourglass figure, in an indiscernible space, wearing a one-piece. I wanted to make a statement and I wanted to be seen – I’m more than my body and I deserve respect and human decency.”

“Fifty feet to my right in the busy, tourist-filled space were two thin, large-busted women, wearing only g-strings and some body paint”

“I watched them with envy,” the plus size model continued. “Nobody yelled at them as they worked to hustle up a few dollars selling photos with eager tourists. They were just another part of New York.”

To see what happened when Anna modeled sportswear, check out the video below:

It was at this point that the model – who has won praise on social media for her role in the body positivity movement – retaliated and said in response to this man’s fetishization of her body, “It doesn’t make it OK. You’re disgusting. Please stop. Please just stop…”

The man then tried to justify what he’d said by adding, that plus size women “don’t know they’re f*ckable.”

Although Anna did very seriously consider ending the photoshoot early, the trauma she’d endured suddenly became worth it when she made eye contact with a young girl watching her in the street. She waved at the girl, and she simply grinned back at the model.

The girl then told Anna that she was pretty, and “in that moment, it had all been worth it. I had been seen,” she later wrote.

Taking to Instagram after the traumatic photoshoot was over the model made a point of explaining that no woman’s worth should be reduced to whether or not men want to have sex with her – regardless of whether she is plus size or not. Here here!

Hopefully, Anna’s decision to speak out will open up a discussion about the fact that fishing plus size women is just as unacceptable as fat shaming them. Bodies are bodies at the end of the day, and everyone has a right to embrace the skin that they are in.

Lessons From Ferguson: Enacting Police Reform Through the Ballot Box