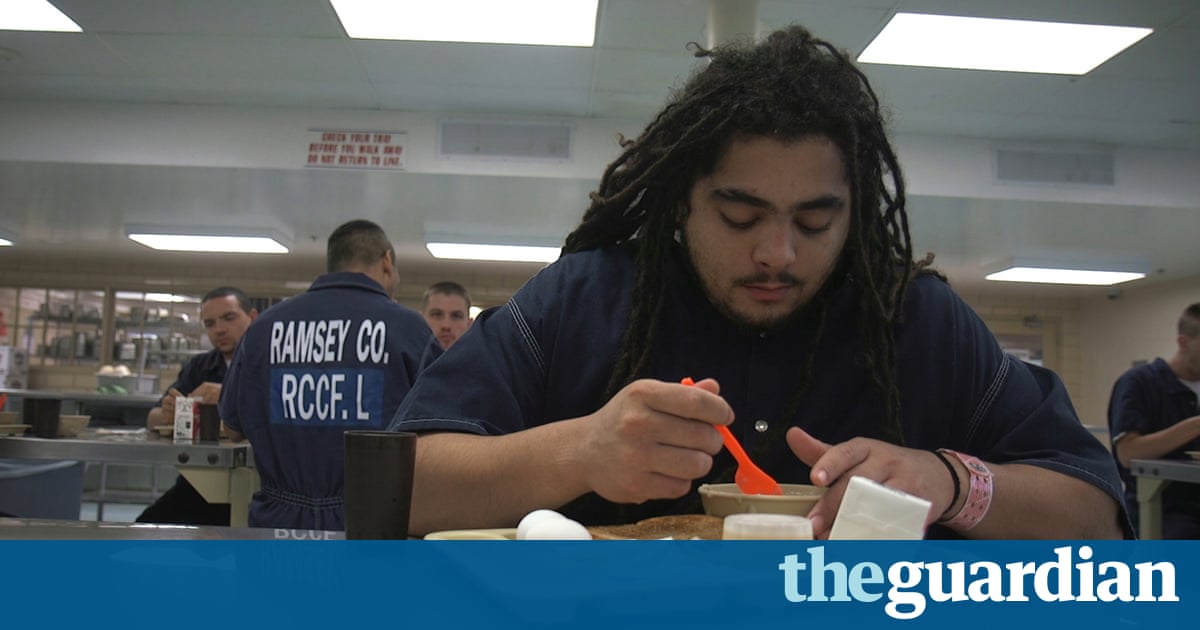 Today is a good day for the roughly 500 prisoners at Ramsey County correctional facility in St Paul, Minnesota. Today is an egg day. Its just before 7am and the inmates are lining up in the mess hall for breakfast, which this morning features two boiled eggs as well as porridge, cold toast, coffee, orange juice and a carton of milk.

Andre Ragland, a 52-year-old drug addict from Chicago who has been in and out of Ramsey over the past 30 years, is excited. Eggs are special, he says as he sits down to tuck into his breakfast from a beige plastic tray in the 20 minutes allotted to eat. Today is going to be a good day.

The soaring US prison and jail population which has hit a record 2.2 million and is the highest per capita in the world is putting a huge strain on state and federal budgets, costing more than $8.5bn a year. Wardens and prison managers are under intense pressure to cut costs across the board, including the food provided to inmates, some of whom are thought to be fed for less than $1.20 a day.

In many prisons across the US, inmates only rarely receive eggs, dairy or meat and fresh fruit and vegetables are sometimes banned altogether. Instead nutritionists are called into figure out ways of achieving states minimum calorie counts and vitamin and nutrient intakes via tubs of margarine and fortified mineral powders and supplements.

Many prisons food service has been outsourced to private companies offering big cost savings and making big profits for their shareholders. One of the biggest, Philadelphia-based Aramark, a company with annual sales of $14.3bn, continues to serve up 380m meals a year as the sole food provider to more than 600 prisons and other correctional institutions despite repeated fines over scandals including serving food tainted by maggots and rats.

While they have a long list of complaints about the food, which is prepared by teams of fellow prisoners, the inmates at Ramsey are luckier than most. Minnesota has brought its food service provision back in-house after years of outsourcing to the private sector and has committed to providing real food for inmates even if it costs more money.

We dont want to fill a bowl with a substance that might meet the calorie requirement and vitamins and minerals [the state requires], but has no appeal, Tom Roy, Minnesotas commissioner for corrections, said in an interview. Being in prison is punishment enough, they dont have to be tortured by bad food.

Roy said he has been able to spend a little bit more than most other states as Minnesota has one of the lowest per capita incarceration rates in the country at less than 200 per 100,000 people compared to more than 800 per 100,000 in Louisiana, the state with the highest.

There is no nationally collected data on prison food spending, which is set at the state or individual prison level. Roy said Minnesota spends an average of just under $3 a day on food for its 10,000 prisoners. That is on the high end, there are some states that do it for considerably less.

Tim Thielman, a lieutenant at Ramsey and the president of the Association of Correctional Food Service Affiliates (ACFSA) which brings together prison officials and food providers for an annual conference taking place across town, said some jails feed prisoners for as little as $1.20 the average cost of each meal at Ramsey.

Thielman, who has devoted his career to thinking about the food provided to prisoners, said spending a little bit more money on food can have a huge impact in improving prisoners mental and physical health and bringing down reoffending rates.

A lot of people are still in the mentality of bread and water, he said. We are passed that in this country. A lot of people dont understand the importance of taking care of inmates and giving them proper nutrition.

Food service is one of the most important things in an institution. Inmates dont have a lot of things to look forward to they have their mail, their visits and their food. If any of those things arent right there will be a problem. If the quality of the food is really poor it can sure set things off.

Thielman said years of penny-pinching on food can be wiped out in minutes if a riot erupts over the quality of food. Riots have erupted at several prisons with Aramark-provided food leading the company to lose contracts in Michigan and Florida.

When prisons have difficulty meeting the calorie and nutrient requirements on tight budgets, they have a nutritionist to call. Barbara Wakeen, owner and operator of Correctional Nutrition Consultants, has carved out a niche of helping prisons find the most creative way to provide and meet nutrient needs without spending more money. Her big secrets: margarine, beans and fortified baking powder.

Id like to see everybody get all of the food groups, but I know that in this environment its not always possible, she said. As a result we have all these wonderful fortified things, weve got fortified beverages, theres fortified cake mixes and baking powders.

The fortified products, which featured heavily at the ACFSA vendor showcase trade fair in Minneapolis, are generally designed for use in hospital patients having difficulty eating solids but producers have found a lucrative secondary market in correctional facilities. We use [them] sort of for cost containment and in some case to prevent security issues [in cases where prisoners might use fruit as a weapon or to block toilets].

Roy has a rule when he visits prisons he calls it the Rule of Three. He talks to the prison administrator, a general prison staff member and at least one offender. My icebreaker is always: Hows the food today? he said.

Roy, who says he makes a point of hanging out in the mess hall and eats with the inmates occasionally, said the responses are mixed. We do have some days when its pretty tasty, there are others when its school cafeteria food.

If Roy had asked Ragland about this breakfast morning, he would have given him an all right, but could do better mark mainly because the prisoner who normally makes the porridge was off today.

7 Off-Beat Christmas Decorations That Will Leave You So Inspired

Great British Bake Off: Nadiya has had ‘no offer’ from Channel 4 – BBC...