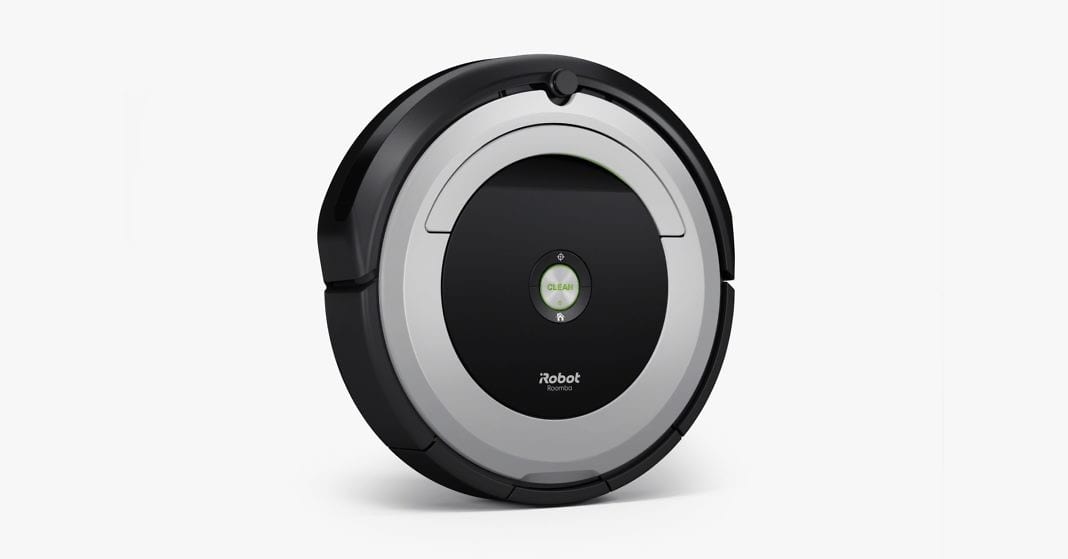 Vacuuming is a chore that’s marked by the absence of acknowledgment, rather than the presence. Everyone notices and remarks on a fragrant and delicious Sunday meal. But you never walk into someone else’s house and say, “I noticed your floors are remarkably free from detritus today!”, unless you are a real jerk.

That makes vacuuming an uninviting and thankless task. It also means that robot vacuum manufacturers have to develop some kind of metric to prove that the robot has actually been cleaning. Lower-end models bounce randomly around your house; higher-end ones find some other way to prove to you that they’ve picked up all that schmutz.

Case in point: iRobot’s Roomba 690 uses a technology called “Dirt Detect.” When the robot’s sensors detects a particularly dirty area, it goes over it several times to make sure that it’s thoroughly clean. It took the Roomba 690 one hour to clean about 300 square feet of my toddler-, infant- and dog-infested house, taking several passes over each area that triggered the Dirt Detect feature. When I checked the app, it had found—wait for it—173 Dirt Detect events.

Out of curiosity, I took it to a friend’s house with no kids and a hypoallergenic, non-shedding dog. Their Dirt Detect count? 2.

The Only Difference That I See

The Roomba 690 is the midrange model in the Roomba line. While the 980 is my favorite robot vacuum, its price puts it out of range for most people. The 690 offers much of the same time-tested iRobot technology, but at a much lower price.

Setup is much the same as the 980—plug in the charging station, and plop the bot down on its pads. It took about two hours for the botvac to charge fully, with an average of 1.5 hours runtime before it depleted its battery.

As with the 980, the 690 is Wi-Fi-enabled and works with Google Home and Alexa. On the app, you can check the battery’s status, schedule cleanings, and keep track of time spent cleaning and your Dirt Detect events. It also uses iRobot’s same virtual wall system.

There are a few noticeable differences. Rather than the 980’s advanced AeroForce cleaning technology, the 690 uses an earlier iteration called AeroVac. The AeroVac system sounds nothing like AeroForce. The sound is tinnier and less robust, so much so that my spouse asked me if we could be sure it was actually cleaning (173 separate Dirt Detect events! Count them, my dude!).

However, the AeroVac tech is clearly quieter than AeroForce. In contrast to the 980’s whopping 80 decibels, the 690 generated an average of 65 dB worth of noise.

Also, rather than the 980’s advanced mapping capabilities, the 690 uses sensor technology to navigate through your house. Practically speaking, it means that you’ll hear it dinking on the walls and on your furniture as it cleans. It didn’t hit nearly as hard as the Neato D5, but it did open an unlatched bedroom door.

Also, rather than the 980’s rubber carpet agitator, the 690 has a carpet brush. After running it eleven times, my daughter’s hair and mine failed to snarl it up (foiled again!). That said, I did clean the brush regularly for my own peace of mind.

The 690 does have a few foibles. It occasionally struggled to find its charging station. If it completed a job while it was in another room, it bounced around fruitlessly until I took pity on it and carried it closer to its dock. At least it completes the cleaning cycle before it gets lost.

Also, the drop sensor is pretty easy to fool. Online reviews note that the 690 will treat dark rugs and carpets as a cliff. It didn’t react to dark felt on my carpet, but it did become befuddled by a curtain. We have a step in our house that has a curtain next to it. If the curtain was draped next to the step, the vacuum would clean along the edge of the step until it came to the point where the curtain stopped.

“My Pal has detected a cliff!” it would alert me, every time. I moved it a half-inch with my foot and it went on its way, but it was still annoying.

Though this robovac has a lot going for it, I did miss the 980’s mapping capabilities; the 690 doesn’t tell you the square footage that it has covered, just the time spent cleaning. And as a long-haired person living with other long-haired people and pets, I really missed the 980’s carpet agitator. I didn’t realize how gross accumulated hair was until I had the option of not dealing with it anymore.

This robot vacuum delivers most of the iRobot package for a much, much better price. The Dirt Detect system is uncannily accurate. At several points, I sprinkled baking soda and vinegar on the carpet, let it dry, and vacuumed it up. Later that day, I watched as the 690 hopscotched across those very same spots. The remaining vestiges of baking soda were invisible, but the 690 made like a truffle pig and sniffed them out.

When it comes to cleaning, putting metrics on a robot vacuum might seem like overkill. If a tree falls in the woods without someone hearing the sound, etc. Why do you need your botvac to tell you if your house is clean? After all, can’t you tell by looking at it?

Sometimes, you can’t. Watching as the Dirt Detect events went down from a horrifying 173 events to a somewhat manageable 25 for each run gave me a little peace of mind (and a little less grit on the floor). The Roomba 690 isn’t the cheapest possible option, particularly if you shell out for a few more of iRobot’s invisible wall barriers. At under $500, it's a botvac I can recommend—it's got the right features, good performance, and it won't leave you feeling like you got ripped off.

Dad bakes pasty the size of his newborn son

Wild oversharing comic Phoebe Robinson: ‘I do dumb things. That’s who I am!’