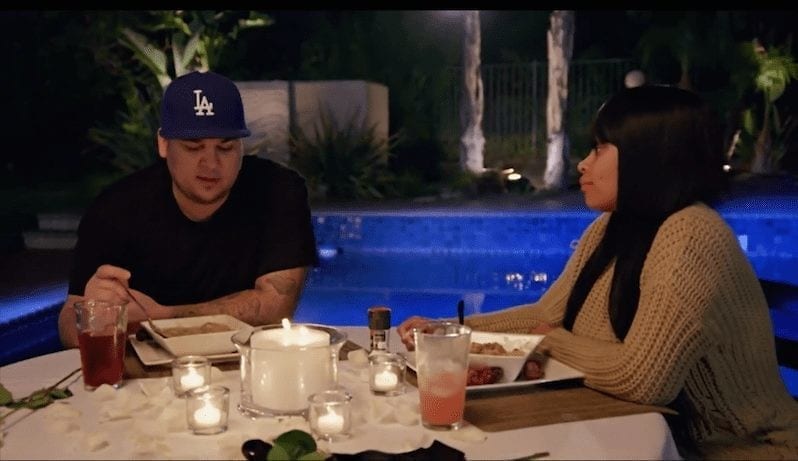 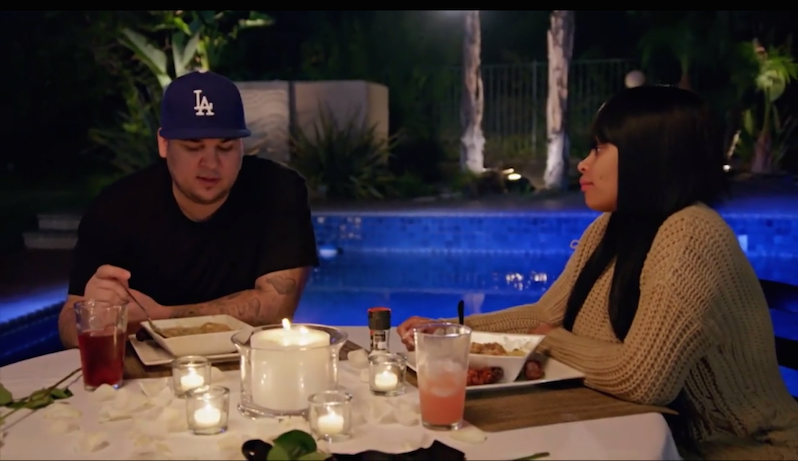 This week on the most boring Karadashian spinoff to date, reunions are planned, roommates are evicted, and two grown adults let an internet personality test dictate their relationship. Lets dive in.

The episode opens with a brief conclusion to the DC trip. Tokyo Toni is still yelling at Rob for being a piece of shit fianc, and he literally just responds to every single one of her statements with yeah. She even goes through his phone to make sure he isnt still texting bitches, and Rob laughs it off as if this woman wouldnt 100% murder him in the bat of an eye.

Back in LA, Rob goes over to Chynas to sort through a baby gift basket that Kim sent them, but the conversation takes a turn for the uncomfortable when Chyna makes Rob play rock, paper, scissors for the booty. These people are millionaires.

Naturally this leads into a serious talk about their relationship and all the valid points that Toni brought up in DC.

Rob: Your mom doesnt scare me.
Chyna: Your first mistake.

Rob admits that maybe their relationship had a bit of an unconventional start, but all that matters is how they move forward. If the fact that your fiance tweeted out your cell phone number last weekend to her millions of followers, Id say youre not moving forward all that well.

One of the main plot points of this episode is that Scott is concerned that Rob doesnt hang out with his old friends. These guys are close enough with the rest of the family to still talk to Scott and Kourtney on the reg, but Rob hasnt spoken to any of them for at least two years. He tries to get Rob to agree to some kind of reunion, but Rob mumbles a couple excuses and then changes the topic to STD tests. Smooth.

Scott: I just got tested. Its so dope.
Rob: Didnt they stick a cutip inside your dick.
Scott: Yeah. Loved it.

Our second major plot point comes courtesy of a love language test that Sam found online. Chyna takes it and then makes Rob take it as well, and finds out that the two of them are speaking different love languages. This news rocks her world.

Chyna: Rob and I always get different answers on our Buzzfeed quizzes and now I dont know what to believe.
Sam: How much money do I get for bringing this test to your attention?

After finding out from the love test that Chyna wants nice things done for her, Rob has Paige teach him how to cook Chynas favorite meal. Im glad it took an internet personality test to teach Rob that he should be doing nice things for his fiance.

Scott goes to see Chyna with his concerns about Rob and his friends. He wants to plan a get-together for all of them and Chyna is on board, primarily because its a situation that would make Rob horrifically uncomfortable.

Chyna: Social situations make Rob anxious, so we should probably blindside him with this party.
Scott: Fantastic. Sign me up. I have a giant penis.

While his two closest confidants are planning his ambush surprise party, Rob prepares his own surprise for Chyna. Hes set up a home cooked meal outside under the stars that are totally visible in the smog-infested, light-polluted city of Los Angeles.

Their date is complete with stilted conversation about why they should go on more dates. The chemistry between these two, I swear.

The next day, Kris comes over to hang out with Chyna, mock her decorating skills and discuss their living arrangements. She asks if Chyna is going to kick Paige out to make room for the baby, as if that giant-ass house doesnt have more than three rooms.

Scotts surprise party is spoiled when all of Robs friends start texting him for details. Scott is pissed, because now Rob has the chance to potentially back out.

Scott: Honestly, what the fuck is wrong with people. Why do they need to know things like place and time. Im the best party planner of all time.

To no ones surprise, Rob is not psyched at the thought of having to face all the people hes been blatantly ignoring for two years now. He begrudgingly agrees to it anyways, probably because Ryan Seacrest was pointing a gun at him just off camera.

Rob: I want something low-key.
Scott: Totally. But we should also get a naked sushi model.

Chyna throws Rob a similar date as to what he did earlier, except his favorite meal consists of chips and Kit Kat bars. They once again sit next to each other and drone out vaguely positive comments about their relationship.

Chyna finally has the awkward conversation with Paige about their living situation. Despite what the commercial break teasers implied for the last forty minutes, Paige was super chill about it all. Its almost like shes a rational adult or something.

Kim sets up a baby boot camp for Rob to prepare him for this child who has no idea what theyre about to be born into. He asks some really important questions like whether or not he can wipe poop into his daughters vagina. This man graduated college.

Chyna and Paige head to the friendly neighborhood Touch of Romance to get supplies for a kinky night for Rob. Has this man not suffered enough? Chyna drops her own housewife-esque motto on us with the iconic I know Rob has trust issues, but hes gonna have to trust me tonight.

Chyna: I want to abuse him.
Clerk: MAAM.

What follows is the most important scene to take place this episode. It will haunt me for weeks. Rob, casual as ever, strolls into his kitchen and whips himself up a smoothie consisting of frozen salmon, frozen steak, milk, ice and blueberries. I have no less than 600 questions.

Is this for real? He blends that shit up and drinks it with zero explanation, either in person or via voiceover. He was kind of smirking while he did it, so is this an inside joke with the producers? Is Rob Kardashian trolling all of us? Im going to lose sleep over this.

Chyna: Will any of your friends at this BBQ be black?
Rob: Oh babe. This is Calabasas.

Kourtney and Scott show up for the reunion BBQ, which is the single most uncomfortable social encounter Ive ever been forced to witness. Rob stares at his food while his best friend JJ bitches about how Rob ghosted him for two years.

JJ: Ive best Robs best friend since 4th grade.
JJ: He hasnt texted me back in two years.
JJ: He skipped my wedding.
JJ: But its fine.

Rob vows to keep in better contact with his friends, and they all walk away with a check from Kris for their troubles. Will JJ be a recurring character? God I hope so. His salty ass would be a great distraction from this otherwise trainwreck of a relationship.

All hail the return of unlimited data

If you’re tempted to move to Canada because of Trump, please read this first.