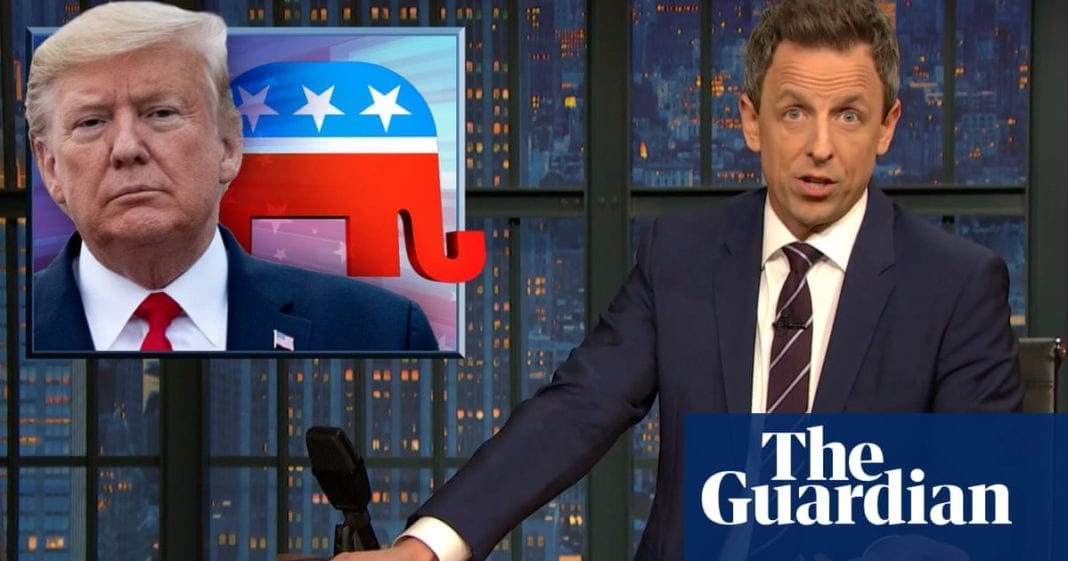 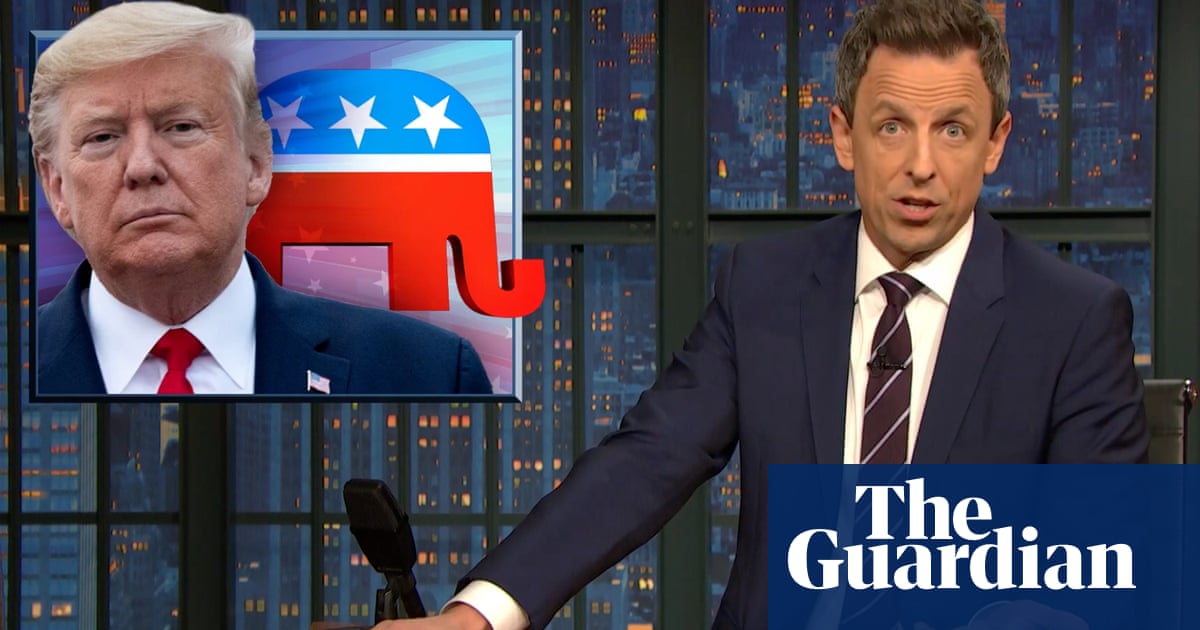 On Late Night, Seth Meyers discussed the waning days of the Senate impeachment trial and Donald Trump’s steadfast belief in executive power. Trump has frequently cited article two of the constitution as justification to do, well, anything, though “I doubt Trump has ever read even one full sentence of the constitution”, said Meyers. “He probably got three words in and quit – ‘We the people? I think that M is upside down.’”

“Trump’s claim that he can do whatever he wants is very much at the core of Trumpism and the modern Republican party, and that ethos is very much on display in this impeachment trial,” said Meyers. “Republicans have spent a decade pretending to be a principled party based on limited government and respect for the constitution, when in reality, they never cared about any of that stuff. Today’s Republican party is an authoritarian movement led by people who believe they should have the power to impose their will on everyone else.”

Trump “perfectly embodies that authoritarian mindset”, said Meyers, as displayed in shocking form on Wednesday when his lawyer Alan Dershowitz argued to senators that a quid pro quo arrangement to influence the 2020 election would not be illegal because Trump was trying to get himself re-elected, which is in the national interest.

Meyers called that logic an “absolutely insane argument that is antithetical to literally everything the founders believed when they wrote the constitution”. In practice, Meyers continued, Dershowitz argued that “if you believe you being president is what’s best for the country, then you’re allowed to do whatever you want in order to remain president. That’s insane.”

“By that logic, Trump could shut down airports under the pretense of high winds any time one of his Democratic challengers had a flight,” he said, “which would affect everyone but Bernie, who likely has a backup mule.”

“The Senate impeachment trial is racing democracy to see which one can end faster,” said Stephen Colbert on perhaps the last Late Show episode before the trial ends, pending a vote on whether to admit new evidence or witnesses.

In closing arguments on Thursday, the California congressman Adam Schiff argued for the prosecution that senators acknowledge the absurdity of not allowing witnesses, while Trump lawyer Jay Sekulow made an eerie plea to the American people to “join us, join us, one nation, one people”.

“There’s nothing unsettling about that,” Colbert deadpanned. “Join us, join us. Resistance is futile. Kneel before Trump and be absorbed by his Maga for there is joy and peace nestled within his sweaty folds. Join us – join the hive mind.”

Colbert also returned to Dershowitz’s argument from Wednesday that Trump could do no wrong if he acted to ensure his re-election, which was in the national interest. “Now, if this rationale alarms you, then you’re in good company,” said Colbert, as the House speaker, Nancy Pelosi, compared the logic to the absolute monarchism of Louis XIV. “When you think about it – and I recommend you don’t – Trump has a lot in common with Louis XIV: same decorating style, same lax attitude toward extramarital affairs, they both poop in a drawer,” Colbert said. “Plus, Louis was the sun king and Trump is the stare-directly-at-the-sun king. The only difference is Trump’s motto: let ME eat cake.”

If Senate Republicans have their way, the impeachment trial will be over by the end of this week, said Jimmy Kimmel on Thursday night. “Captain Cover-up Mitch McConnell is hoping to have it all wrapped up by tomorrow.”

Kimmel, too, remained baffled by the argument put forth by Dershowitz that “Trump could just do whatever he wants by just saying that his re-election is in our best interest. By that logic, he could start eating bald eagles for breakfast and he’d say: ‘I have to, I need my strength for the campaign trail,’” said Kimmel.

McConnell has argued that if the Senate opens the trial up to witnesses, as House Democrats have urged, it could go on for months and prevent the Senate from getting business done, “as if they’ve done any business”, Kimmel said. “Blockbuster video has done more business than the Senate in the last three years.”

On the Daily Show, Trevor Noah recapped some of the world’s non-impeachment news, such as Mike Pence’s visit with Pope Francis. “Yes, that’s right, the most religious man in the world met the pope,” Noah said. “I bet after meeting Mike Pence, the pope walked away being like: ‘That guy’s a Jesus freak.’”

Noah had one burning question: “Do you think the pope took Pence’s confession? Because if he did, that would have to be the most boring confession the pope has ever heard. The pope would probably be like: ‘You walked in on your wife taking off her shoes? I don’t care. No, eating salty food is not a sin.’”

Meanwhile, the deadly coronavirus continues to spread in China, and the government has responded with a plan to build a thousand-bed hospital in 10 days. “There is no other country that can do anything that fast,” Noah said. “Like in America, it takes longer than that to get cable installed. I’ve learned when you order cable in this country, you aren’t ordering it for you – you’re ordering it for your grandkids.”

Did Theresa May ask the Queen for Brexit help?