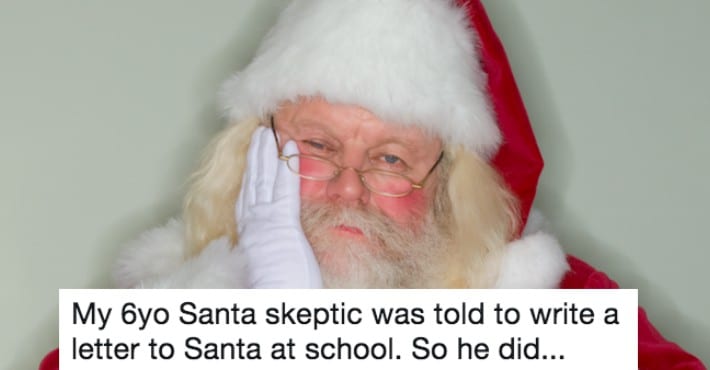 It’s the most wonderful time of the year again! People have begun to don their festive jumpers, almost every mall is decorated with flashing lights, and Christmas trees are slowly but surely starting to pop up in your neighbors’ homes.

Whilst there’s no denying that Christmas isn’t quite the same when you’re an adult, almost everyone enjoys getting into the festive spirit – whether that means stocking up on mulled wine and mince pies, or painstakingly decorating your tree.

But it turns out that there are some seriously skeptical children out there who’ve got absolutely no desire to be merry! Parents often go to extreme lengths in an attempt to convince their children that Santa exists – and he does, trust me! Some encourage their offspring to leave carrots out for his reindeer, and others even use flour to create the illusion of his footprints in their home.

However, for one reason or another, some children are complete skeptics when it comes to Santa’s existence. These children are a nightmare for parents’ whose kids are believers. After all, the last thing they want is for the magic of Christmas to get ruined by another child. As adults, some of our fondest childhood memories are of the excitement we felt at Christmas time.

One of my favorite holiday activities was writing a letter to Santa. I usually had some pretty elaborate requests like asking for Pokémon to be real and for a pet dinosaur, but I was never disappointed when I didn’t quite get everything I asked for. When you’re six, a toy dinosaur and some Pokémon cards are close enough, but that wouldn’t be the case for this skeptical kid… In a now-viral Twitter post, a woman named Sarah McCammon shared her six-year-old son’s jaw-dropping letter to Santa. He’d been asked to write it in school, and he made it quite clear from the beginning of the letter that he was only writing it because he had to. “My 6yo Santa skeptic was told to write a letter to Santa at school,” she wrote. “So he did…”

“Dear Santa. Santa, I’m only doing this for the class. I know your notty [naughty] list is emty. And your good list is emty. and your life is emty. You don’t know the trouble I’ve had in my life. Good bye. Love Im not telling you my name (sic).”

Well, I don’t know about you, but this honestly sounds like something the Grinch would have written as a child. Twitter definitely saw the funny side of the letter, and it’s been favorited and retweeted tens of thousands of times. The child’s mother then made a point of clarifying that her son was simply overdramatic and that the troubles in his life are not a cause for concern. “PS – the “troubles” in his life? His brother. Don’t call child services,” she jokingly wrote.

Twitter users were also quick to point out their favorite line in the scathing letter. SwaggyB wrote, “‘And your life is empty’ bahahahahahah.”

Unfortunately, however, not everyone saw the funny side of the six-year-old’s letter. “I don’t think it’s funny at all, sorry,” Rebecca-Lynn Roy wrote. “He’s six! I’d be deeply disturbed by this if it was my kid. Letters to Santa are supposed to be full of innocence, sweetness & yes humor, but this is extra. Kid sounds like a budding Grinch who might need anti-depressants when he grows up!”

But it turns out that imposing Santa and festive cheer upon your children isn’t always a good thing… Meet 32-year-old Stefanie Howlett who suffers from a debilitating fear of Santa. Her parents regularly took her to visit Santa as a child, and after years of being forced to sit on his knee, she developed an all-consuming fear of him. Horrifyingly, she suffers now from panic attacks if she sees Santa and does all of her Christmas shopping online to avoid him.

“He absolutely terrifies me, but I can’t work out exactly why. Whenever I see him it brings on a panic attack,” she said. “I went on a Christmas coach trip two years ago, and we went to a Santa’s Grotto in Norway.” “When we were told we were going to go in and meet Santa just knowing he was in the next room brought on a panic attack. I burst into tears and couldn’t go in the room – I could barely stay in the building.” “I’ll run away and cry and nobody can calm me down – I can’t even look at him.”

“Christmas [movies] with Santa in [them] terrify me – it’s like somebody else watching a horror [movie] – I start to get palpitations and panic,” she continued. “Everyone thinks it is hilarious, but it’s a real phobia for me.” Thankfully, however, the vast majority of people love Father Christmas. Check out this rescued pit bull who couldn’t contain his excitement when he got to meet Santa!

I’m Such A Social Person, So Why Do I Suck On Dating Apps? (Photos)

PC told public how to save his life