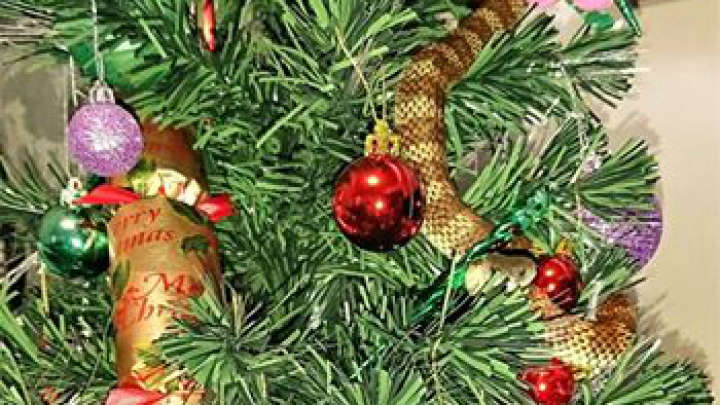 Christmas can be a dangerous time of year for everyone. There’s the conflict in unhappy families, the dangers of drunk driving, the risk of overeating, the snakes in the Christmas tree. The last might be less common than the others, but one Australian found a meter-long (3.3-foot-long) tiger snakepretending to be tinsel as it wound its way through the branches of her plastic Christmas tree.

Tiger snakes (Notechis scutatus) get their name from their stripes, but the association with danger is real, as they are one of the most venomous species in Australia, and therefore the world.

Despite tiger snakes’ popular reputation for aggression,”the only time the snake becomes a dangerous animal is when somebody tries to hurt it, saidsnake catcher Barry Goldsmith, who alerted the world to the discovery through aFacebook post.

The event occurred at ahouse in Frankston, which is a long-established suburb of Melbourne, not some distant bush shack. The homeowner, identified only as Cheryl, was the ideal client, Goldsmith reported in the post. She didn’t panic, she just took a photo and sent it to the snake catcher, me, and 20 minutes later I had the little bugger in a bag.

Goldsmith has patiently explained many times to questions on Facebook that the snake entered the house when someone left the door open.Australians may insist on decorating their Christmas trees with images of snow and reindeer, but the summer conditions bring out the snakes. Nevertheless, Goldsmith told the ABC that the find was a first.

“Although I have found them around the base of a Christmas tree in amongst the presents in the past, I’ve never found one up inside a Christmas tree,” he said. On his page, he reported having found snakes in bookcases, and on kitchen sinks and benches. It is unlikely Australia’s tourism authority will thank him for revealing this to the world.

Goldsmith released the snake well away from human habitation.In the video below, Goldsmith says: There is no such thing as a rich snake catcher, although he’s probably got so much publicity, he has cornered the market for Melbourne at least.

If We Can Keep It review: how Trump happened and how America might survive

This stickball league is making people across cultures and generations feel like kings.