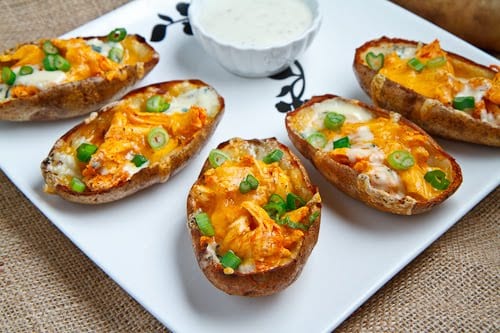 As we trudge onward in the ever-colder autumn season, we come upon yet another tailgating classic that often gets the shit end of the stick by being bought in bulk via the grocers freezer section. Like our friends, pizza rolls, potato skins that you can buy at the store are usually loaded with crap, preservatives, not-real cheese, and questionable bacon toppings. We’re not trying to sound like Food Babe, we’re just telling the truth. You can make your own for less than half of the calories AND without all the added processed shit.

Preheat your oven to 475F and line a baking sheet or two with foil. Set aside. While it heats, scrub your potatoes clean and towel dry them, then prick each all over its surface with a fork. Throw those bagboys in the microwave and cook on high 10-12 minutes or until theyre cooked through. Use a towel or oven mitt to get them out of the microwave unless you want like 2nd degree burns lolz.

Cut each potato in half lengthwise and, using a spoon, scoop out most of the flesh from the potato setting aside for like, latkes or something. Leave a bit of potato in each shell. Set the skins on the baking sheet and spray all over with cooking spray inside and outside and season with salt and pepper. Bake for like 10 minutes or until golden brown.

Remove from the oven and fill evenly with the cheese and bacon. Then put that shit back in the oven for like 5-10 minutes or until the cheese is melty. When you remove them and if you have a shit ton of people who are going to eat these, cut each skin in half. Then, top off with the sour cream or Greek yogurt and a sprinkle of chives.

See so much better.

Five ways to get whiter teeth