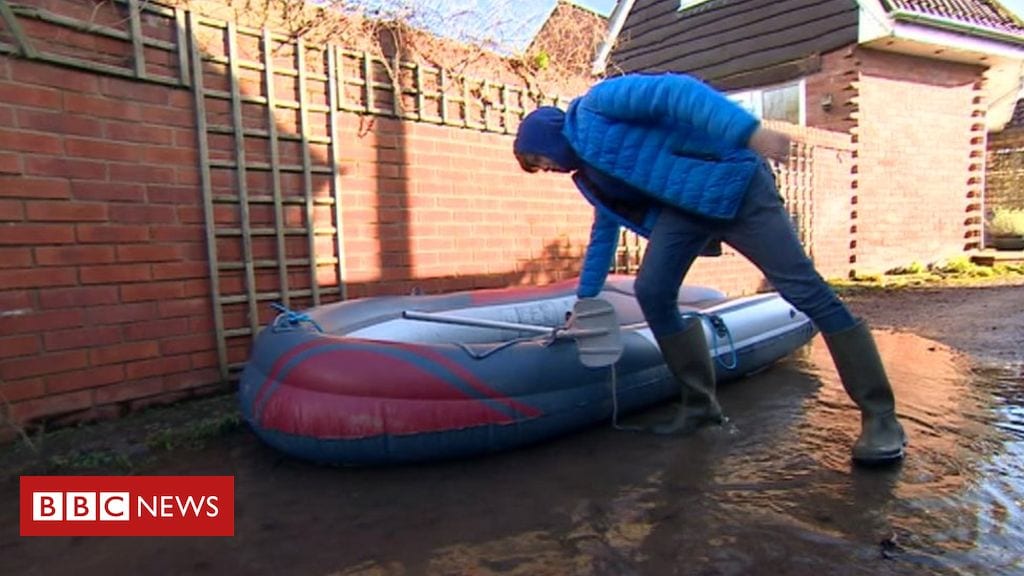 From free bus rides to homemade cookies, unsung members of the public are helping to keep flood-hit communities going. Here are some of their stories.

The village of Hampton Bishop in Herefordshire has been marooned since Monday, when its 500 residents awoke to the aftermath of Storm Dennis.

You can only get in – or leave, for that matter – by canoe, dinghy or tractor.

Good job there are all three.

And often they are manned by volunteers who have taken it upon themselves to support their stranded community.

Among them is parish councillor Steve Hunt who has been out giving lifts and doing supply runs in his tractor.

He’s been flanked by canoeists, ready to nip into the parts his big tyres cannot reach.

“Young canoeists are out while we’ve been out on the tractors, coming alongside where there are bits we couldn’t get to because they’re too deep; taking pints of milk and loaves of bread to people.

“It’s been a good community spirit, all helping each other.”

Farmer Keir Rogers has been putting his tractor to similar effect.

He said the alternative of wading through the water would be “scary”. In places, he says, it’s three-and-a-half feet deep.

“You’ve got to bear in mind some of [the villagers] haven’t been out since Saturday afternoon.”

Elliot Askey is 14 and has a dinghy. And neighbours have been having a go.

“I saw people going round in canoes and I thought ‘that looks well fun’,” he said.

“But I ended up thinking I could actually help people visit their friends, or take supplies to others.

“There’s a WhatsApp group with tons of people on it, so I said ‘anyone need anything taken from A to B?’ and people messaged me, so I went out in my dinghy to help out anyone who needed helping.”

Fireman Mike Link and his crew have been out on a raft supplying a care home in the village.

He’s been helping to ferry in staff too.

“We couldn’t do without them,” said care worker Wendy Oseman. “We’re lucky we’ve got these lovely people.”

Inside the property is Mr Link’s 92-year-old grandmother.

“What are you doing, Michael?” she said to him.

“Just a few things, Grandma,” he replied. “Nothing to worry about.”

When the Severn rose to record levels in Bewdley, Worcestershire, it meant a bridge was closed, making it difficult to get around town on foot.

At least it was – until a special double-decker moved into first gear.

But unusual times call for unusual measures when your community needs a free shuttle around town. And as the bus went all the way, its crew went above and beyond.

Further along the river, others have taken the biscuit – literally.

Next to flood barriers in Upton upon Severn, Worcestershire, siblings Daisy and Doug Wearing have been helping the helpers by handing out cookies.

Their home has been unaffected by the floods, but the same cannot be said for many in the village.

“We know people that have lost a significant amount of property and valuables and possessions,” said mum Amy Wearing, minister at the local baptist church.

She said: “On Tuesday we were stuck in Upton upon Severn and our daughter loves baking so we got some ingredients.

“She said ‘I want to cook some biscuits and give them to people helping’.

“We are fine but people that we know haven’t been.”

Rejected from job after job, this baker with Down syndrome opened her own shop...

50 Delicious (Healthy) Foods To Snack On Instead Of Devouring A Full Bag Of...