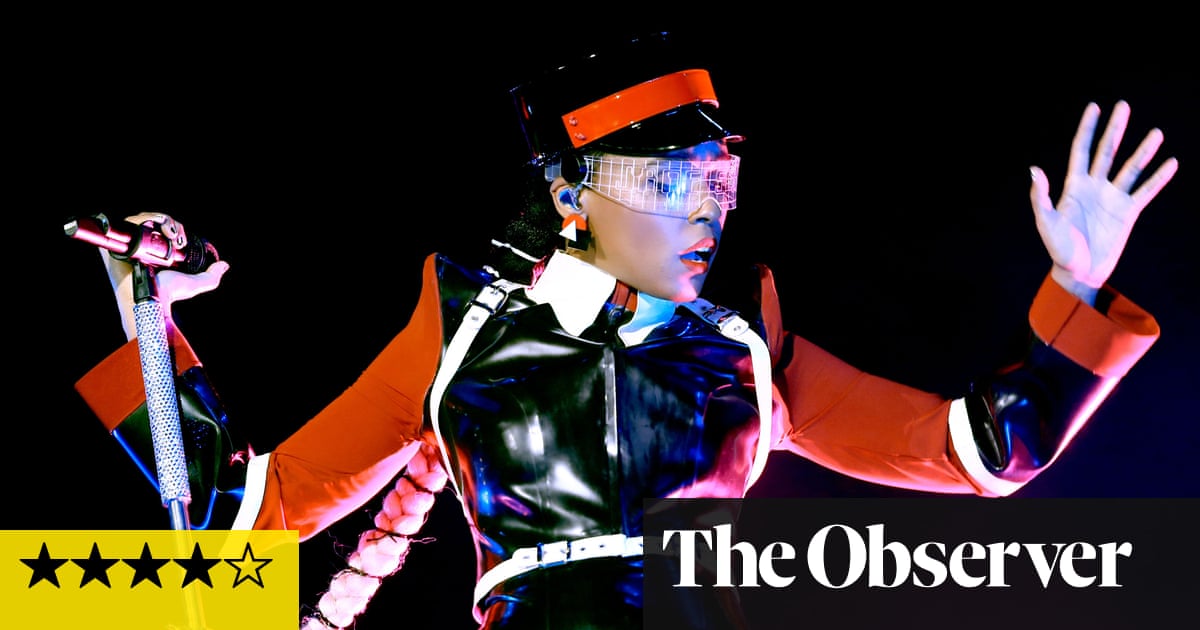 At Glastonbury, you pray for the ground to dry out; at Coachella, tractors spray the desert floor with water to damp it down. It’s one of the many moments of weirdness at America’s premier music festival, set on the lush grass of a polo field in a baking California desert – the kind of thing that resource-scarce future generations will shake their fists at.

The urinals are porcelain and the mozzarella is buffalo. The ethnically diverse, homogenously young crowd is exceedingly polite, beautiful and sober; everywhere you turn, someone is doing a performatively #blessed laugh for Instagram, though the vanity is a lot more honest and charming than you might think. The 1975 perform with a glowing rectangle behind them – a totemic image for this portrait-format generation – and is gently, fondly satiric: frontman Matt Healy is clearly as beholden to ego as much as anyone here.

Earlier on the main stage, Kacey Musgraves has a slot at golden hour, reflecting the title of her Grammy winning album. She’s at her best when channelling the soulful soft rock of Nicolette Larson or Carly Simon, as on the gorgeous Lonely Weekend – but as a showperson she struggles. A bit of back-and-forth chanting with the crowd is fumbled, and her tepid political banter about us living in a “crazy ass world” is cowardly in its lack of specificity.

No such problem for Janelle Monáe later on, who proudly announces her queerness and tells us not to “give a fuck about pissing off this administration”. With the occasional gaps in her songwriting papered over with majestically heavy arrangements and Janet Jackson-channelling dance moves, she lives up to her bombastic opening: Also Sprach Zarathustra followed by the Declaration of Independence.

There is more high quality at every turn, including two concurrent flavours of Eurasian hauteur: Russian DJ Nina Kraviz delivers a pounding live show, set amid a dreamlike motion-captured living room, while in the next tent over, actress and singer Charlotte Gainsbourg plays riveting, emotionally unreadable coldwave. And with big rap names like YG set to perform later in the weekend, the genre’s outer reaches are also explored.

“I got way too high before I got up here,” frets Jpegmafia, who also complains of being “hot and old” – but his brilliant set, somewhere between Sheck Wes and Death Grips, is full of lunging energy.

Even better is Tierra Whack, whose bitesize tracks lament everything from dead dogs to cholesterol; her wonky bravado is matched by a melancholic, easily hurt temperament.

Performing on the tunnel-format Sahara stage, girl group Blackpink are Coachella’s first ever K-pop performers. The producers, with their pop reggae, reggaeton and EDM treatments, are following rather than leading, but the group themselves are charismatic – particularly Jennie Kim, whose lascivious rapping rightfully earns her a giant solo number in… Solo.

Headlining the main stage is Childish Gambino, the musical arm of cultural polymath Donald Glover. It’s a little rich to tell everyone to put their cameraphones away and then have someone follow you with a camera the entire show, but it creates a sense of theatre on the big screens. That theatre continues as a joint is shared with a man in the crowd to subvert the “introducing the band” section (and perhaps give a middle finger to Philip Anschutz, CEO of Coachella’s promoter AEG, who has campaigned against legal marijuana).

These japes are much needed in the first half, when his tracks veer between knowingly ersatz trap and sub-Sly Stone funk odysseys. A burst of Gnarls Barkley’s Crazy shows up his lack of songwriting chops, and is accompanied by bug-eyed jitterbugging. These underwritten tracks can seem like an ironic pose, the work of someone dancing through quotation marks. But this feeling melts away as his A-grade material arrives. A new track, a tough electropop number about shining in the dark, sounds like a surefire hit, and it’s followed by the malevolently jaunty This is America, the verbally dextrous V. 3005, and the eternally classic Redbone, whose chorus of “stay woke” remains the core political credo for Coachella’s millennials.

With its $425 tickets – $999 for VIPs – many will howl that Coachella is a playground for the rich, but you can at least see where the money is spent: an Olafur Eliasson-aping spiral rainbow walkway, a giant spaceship staffed by hippos and, crucially, a relative lack of the soul-sapping branding the plagues many British festivals. Coachella remains the world’s most sought after selfie destination – but also takes stock of the global pop scene in a way that few of its peers manage.