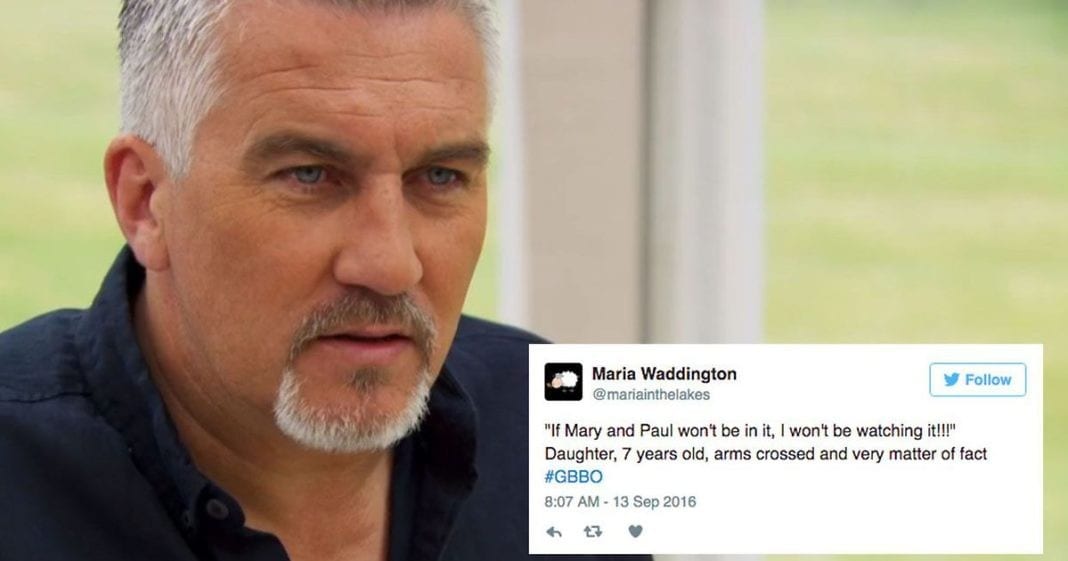 People are up in arms about the ‘Bake Off’ moving from the BBC to Channel 4.
Image: bbc/twitter/@mariainthelakes/mashable composite

LONDON You know how popular a TV show is when just the mere mention of it moving channel is enough to invoke instant, nationwide uproar.

On Tuesday morning, the news broke that much-loved British classic The Great British Bake Off was moving from the BBC (which has been its home since 2010) to Channel 4.

According to this BBC article, the production company (Love Productions) was unable to reach an agreement with the BBC on money, which prompted the move to Channel 4 (who, from the sounds of it, have offered more).

At this stage it’s unclear how a change in channel will affect the show, but we know already things won’t be exactly the same Channel 4 have advert breaks for, one.

Some people have taken the news pretty hard.

When you find out The BBC have lost the right to air The Great British Bake Off #GBBO pic.twitter.com/xM50m3pN9P

“If Mary and Paul won’t be in it, I won’t be watching it!!!” Daughter, 7 years old, arms crossed and very matter of fact #GBBO

Can’t believe the BBC have lost the rights to #GBBO – it feels so wrong it being put on any other channel.

The thought of #GBBO with adverts pic.twitter.com/sOo7AfPUe5

Others were less concerned.

Don’t get all this hooha about #GBBO moving from BBC1 to Ch 4. As long as there’s Paul, Mary, Mel, Sue, bakers, cake & bread, who cares?

Does it really matter what channel #GBBO is on, look what moving to C5 done for #BigBrother

Some, meanwhile, weren’t taking the whole thing too seriously.

It great news for bakers who run out of time on #GBBO, as they’ll now be able to use Channel 4+1.

Former Bake Off contestants had mixed reactions, too.

So I go away for one day and look what happens! #bakeoff

#gbbo is a BBC show, and it’s a shame it’s moving, but let’s all calm down and just see what it’s like. Don’t implode yet everyone!

I think Mary will stay, she is Bake Off, along with Paul and the girls xx https://t.co/NfokmFZble

Really sad to hear that the BBC has lost rights to Bake Off. Its success is down to format and aesthetic – commercialising will ruin that.

Oh, Bake Off. Look what you’ve done to us.