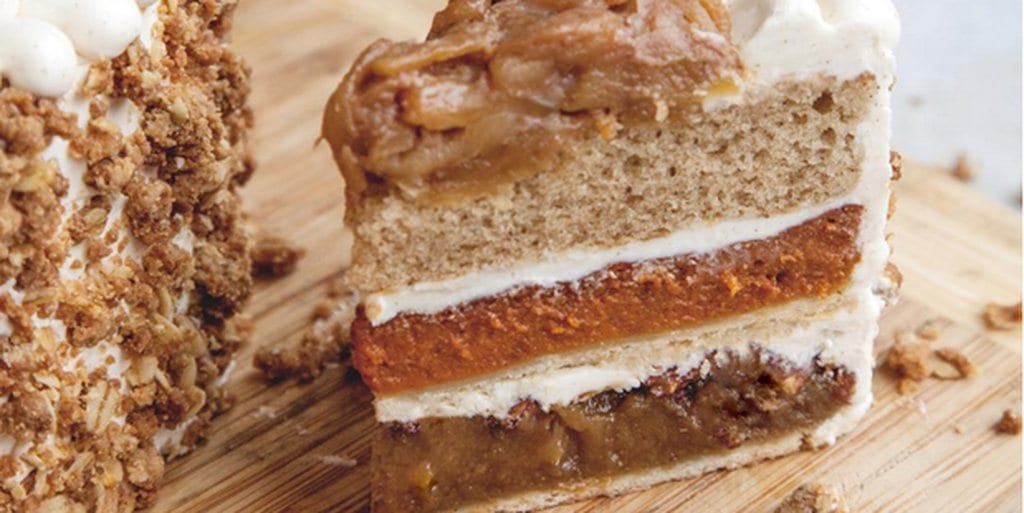 On a recent segment ofLIVE with Kelly and Michael, the chipper morning duoimpliedthepiecaken is a new dessert discovery. In reality, though, this quirky Thanksgiving dessert dates as far back as 2010. And sure enough, search the hashtag #piecaken on social media and you’ll find photos of cakes sliced in half to reveal jammy red strawberry or golden apple pie fillings.

ChefShaquay Peacock, a former contestant on Chopped, explained the piecaken on her blog like this:

“Every now and then I browse the Internet searching for new and unique recipes. I was in a mode where all I could think of is baking pies. While searching for new pie ideas I came across something that I never heard or seen before. Piecakena genius idea and kudos to whomever thought of it. Piecaken is when a pie is baked within a cake. The outside it looks like a typical cake but when you slice a piece you get pie within it.”

Piecaken looks like a cake from the outside, but cutting a slice of it reveals the pie that was baked inside. As for the types of pie or cake best suited for a piecaken, the options are limitless. Chef Shaquay, for example, made a pumpkin pie baked into a spice cake, complete with amaple butter cream frosting. On LIVE with Kelly and Michael this week, Kelly Ripa feigned delight over a flyer advertising a $49 piecaken creation consisting of pecan pie and pumpkin pie in an apple upside-down cake layered together with a cinnamon buttercream. “It’s worth every penny,” Ripa deadpanned, before chewing on the flyer.

The mastermind behind the Kelly and Michael piecaken is Zac Young, the executive pastry chef at David Burke fabrickin New York City. In an interview with the Daily Dot over e-mail, Young explained how he brought the dessert to David Burke fabrick with the original idea to serve piecaken by the slice as a Thanksgiving special. Last week, Young posted a photo of his piecaken creation on David Burke fabrick’s Instagram account and the rest is viral dessert history.

Working with Gian on Thanksgiving Pie-Cake-En @davidburkefabrick. If you aren’t having this for TDay, you are doing it all wrong. #pecanpie #pumpkinpie #appleupsidedowncake

“Once I posted a test batch picture on Instagram, I knew it would be a hit. With five days until Thanksgiving we announced that we would sell them retail, something we had never done before,” Young told the Daily Dot. And the response to the $49, Kelly Ripa-approved piecaken? “Considering, we are only doing pick-up this year, the response has been INSANE,” he said.

the #PIECAKEN: trifecta of holiday desserts by @zac_young at @davidburkefabrick. apple turnover cake + pumpkin pie + pecan pie crust w streusel crunch around the outside. SO DELISH! my mom is eating the extra slice i brought home now #dessert #thanksgiving

Alas, as many dessert die-hards have pointed out on Twitter and Instagram following the airing of LIVE with Kelly and Michael, the piecaken is hardly a new dessert. In fact, it might even have a different name: the “cherpumple.”

Many credit Charles Phoenix, a coffee table book author and guest judge on Cake Wars: Christmas, as the original creator ofthe Franken-dessert. Phoenix credits himself with developing a recipe for the cherpumple (also called “the monster cake”), a three layer cake stuffed with cherry, apple, and pumpkin pie.

Phoenix explained the unlikelyorigin story for his Franken-dessert to the Daily Dot in an interview. He came up with the cherpumple in 2007, he said, so his family would waste fewer paper plates each Thanksgiving. Every year, Phoenix’s family served three piescherry, pumpkin and appleas well as a spice cake that is a heirloom recipe. The end result? Piles and piles of paper plates.

He recalled walking into the kitchen one morning and seeing all the disposable plates stacked up in the trash can. “‘You guys, we need to save on paper plates! We’re not a green family,'” Phoenix recounted telling family members. His solution? Bake all the pies at once and add an extra layer of white cake.

“It kind of married our family heirloom cake with the pies,” said Phoenix. The so-called “King of Retro” posted a video of himself making the monster-pie cake on his website, which features several seasonally-appropriate cherpumple recipes, and in 2010, his creation graced the front page of The Wall Street Journal.

Phoenix has never tried a slice of piecaken from David Burke’s fabrick, or any of the other piecaken recipes that have cropped up on the Internet, including a blog devoted to piecaken recipes. Still, he is happy to spread the sweet, gooey love: His advice to piecaken and cherpumple bakers is to try making the Franken-creations at home initially, and not to be disappointed if your creations don’t turn out Instagram-worthy at first. One pro-tip: Bake the pies first.

“Your cherpumple could fall, fail or hemorrhage,” he warned. “Cherpumple slices don’t have to be perfect like your grandmother’s pie.”

“We all know, there’s no explaining the way the Internet has changed the world,” Phoenix said. “You can just create your own network and things take off. The cherpumple became something. It became well, kind of legendary.”

Popular on the Daily Dot
The 20 best classic MS-DOS games you can play for free online
There are 2,300 games in the MS-DOS archive, but you should just play these.
By Matt Silverman — January 08, 2015
Popular on the Daily Dot
13 movies you can watch for free on YouTube right now
With a little ingenuity and a lot of time on your hands, you can find almost anything on YouTube.
By Nico Lang — November 24, 2015

10 Magical Makeup Looks That Will Steal The Show At Your Fourth Of July...

7 Foods To Eat The Night Before If You’re Planning To Wake Up Early...