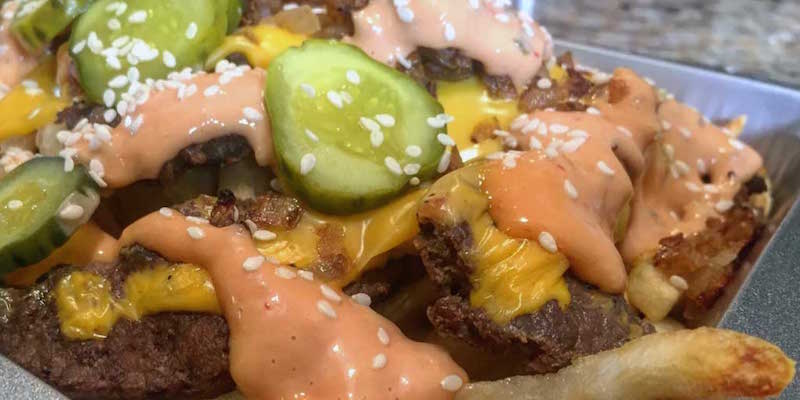 A while back, we set out to leave our mark on the world by creating an epic Big Mac Pizza.

However, that insane pizza wasn’t the only thing we made on that glorious day.

At the time, Matt and I had no idea the monster we had on our hands, the Big Mac Pizza, would soon become an unstoppablefood creation featured all over the Internet.

With no idea it would amass over 12 million views in a month, we decided to hedge our bets and make some Big Mac Fries while our pizza baked in the oven.

As longtime fans of In-N-Out and its “secret” Animal Style Fries (fries, cheese, spread, grilled onions) and Roadkill Fries (same as Animal Style, but with a burger patty), we felt McDonald’s was long overdue for a loaded fries option of its own.

With an excess of fries left over from the pizza, I pulled out a small brownie baking pan and began loading it up with fries. Matt shuffled over to the stove, chopping and caramelizing onions.

Much like the Big Mac Pizza, we wanted to maintain visual cues from the iconic burger — we crumbled up the meat patties, added more slices of cheese and let it bake in the oven until the color looked presentable (everything was cooked already, it was more about aesthetics and gooey-ness now).

Once out of the furnace, we dotted it with more pickles, caramelized onions, spread and sesame seeds.

Well, as you can see, the result was badass:

For more awesome recipes and food news, check out Foodbeast.tgm