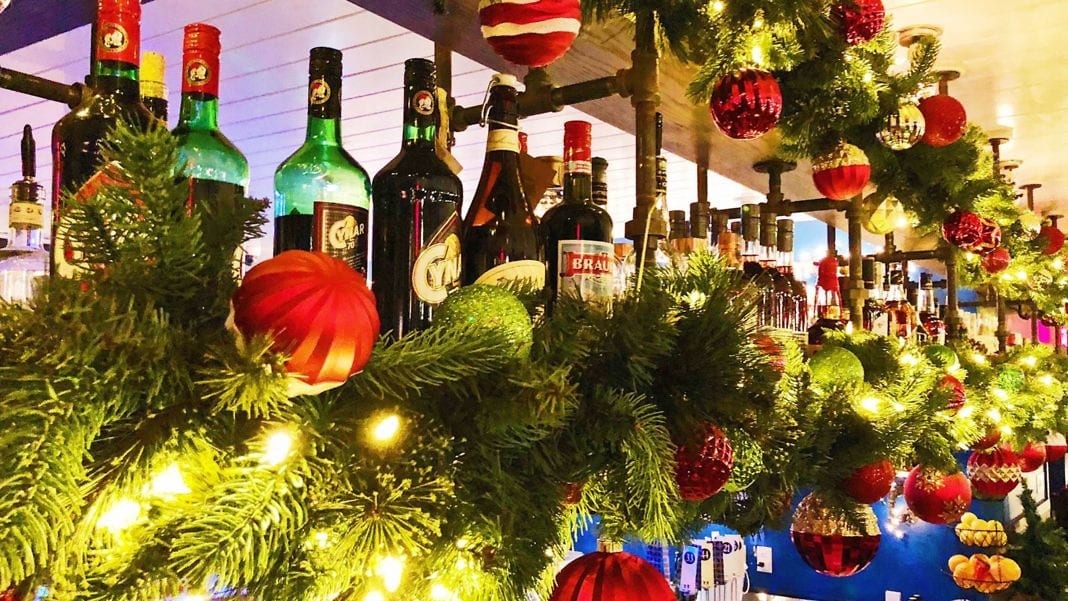 The holidays are all about exuberance and when it comes to decorating, many bars and restaurants across the country have certainly taken that idea to the extreme. These winter wonderlands are a sea of tinsel, candy canes, nutcrackers and twinkling lights. And that’s not to mention all of the festive cocktails and special treats they’re offering.

So put on your ugly sweater and check out some of the most impressive Christmas and Hanukkah displays from establishments around the country.

For the fourth year in a row, the annual Miracle on Ninth Street popup Christmas/Hanukkah bar, spearheaded by New York’s Mace, is back. This year, 48 bars across the nation are participating, including Baltimore tiki haven Mutiny Pirate Bar & Island Grille, which will be transformed into Miracle on Magothy Beach for a full month. Aside from the requisite menu of delicious cocktails served in festive glassware and costumed bartenders, the tropical watering hole has added plenty of sparkling ornaments and santa hats to the flotsam on its walls.

If you’re looking for a holiday popup bar with a bit of, well, pop, head to Brooklyn’s acclaimed Leyenda, which has transformed itself into Sleyenda. The Latin-inspired bar, which is owned by top bartenders Julie Reiner and Ivy Mix, is channeling some of the world’s most accomplished pop icons in its holiday décor. Expect plenty of glittery, pink decorations and photos of Mariah Carey and Whitney Houston. Did we mention the Beyoncé Christmas tree topper?

Houston’s Anvil Bar & Refuge is one of the best bars in the country and it takes holiday decorating as seriously as its drinks mixing. Grab a cozy booth and enjoy a warming concoction, like the Negranza Nog (Cognac, rum, sherry, Becherovka, a whole egg, cream), while you admire the Christmas tree and row of hung stockings.

Surviving Chicago’s famously blustery winter requires a certain level of holiday cheer, and luckily you can find plenty of it at the Chicago Athletic Association hotel. Its Christmas-themed popup, aptly named Happy’s, has a bar featuring drinks chosen by renowned bartender Paul McGee. There’s also plenty of lights and tinsel as well as nightly events, including karaoke.

Every December, Chicago institution Butch McGuire’s goes all out with its holiday decorations and this year is no exception. The Irish bar’s ceiling and walls are covered by an impressive patchwork of lights, ornaments and knickknacks, including a row of oversized nutcrackers. If you stop by for a pint be sure to wear your ugly Christmas sweater.

It’s hard not to dream of an island vacation this time of year, but if you can’t escape to the tropics stop by a tiki-themed Sippin’ Santa’s Surf Shack popup. The sister concept to Miracle on Ninth Street, Sippin’ Santa originated at New York’s Boilermaker, but has spread its tropical cheer to bars around the country, including Jeff “Beachbum” Berry’s Latitude 29 in New Orleans. Stop in for a Sick Nick Swizzle (overproof rum, lime juice, allspice liqueur, vanilla, cinnamon).

Three Christmas carol-loving San Francisco bar veterans have decked out a North Beach restaurant space with festive wreaths, a giant advent calendar and rolls of plaid wrapping paper. There are, of course, over-the-top Christmas cocktails, like the Cranberry Negroni that is served in a transparent glass ornament. Deck the Halls is also hosting a blue-hued Hanukkah popup-within-a-popup called Dreidel Bar, which features a cocktail served in a Chinese takeout container.

Escape the drama of the holidays at a special Christmas bar on the roof of the chic Pod D.C. Hotel. Enjoy special drinks, gingerbread cookies and spiced lattes. If you’re looking for more creature comforts, head downstairs to the Crimson Diner for a hearty meal (perhaps, breakfast for dinner?) or drinks at the Whiskey Bar.

More than 12,000 cases of Pillsbury flour recalled over salmonella concerns

Two raw fish dishes to serve on top of the perfect bowl of rice...