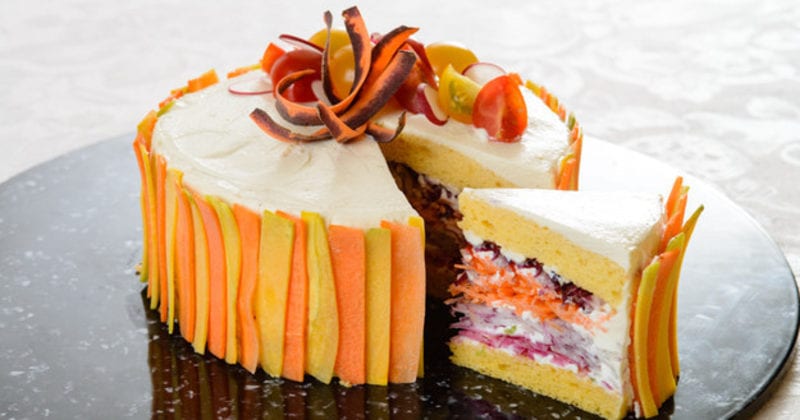 There are certain things in life that you just don’t mess with, and cake is one of them.

Unless you’re Vegedeco Salad Cafe in Japan, that is. What they’re creating flies in the face of everything we know and love about the undisputed champion of dessert. Instead of allowing patrons to eat their feelings with a side of buttercream frosting, they do the unthinkable by making deceptively beautiful cakes out of vegetables.

A food stylist by the name of Mitsuki Moriyasu came up with the idea, presumably after giving up on life.

This princess-party-worthy confection, for example, rests on a bed of lies (and beets).

That being said, Moriyasu paved the road away from happiness with good intentions.

Instead of dropping salads (otherwise known as edible sadness) in front of customers, she adds some visual appeal to the situation.

These counterfeit creations were such a hit back in 2015 that Moriyasu and a few restaurateurs decided to open a joint called Vegedeco Salad Cafe that’s dedicated to the distribution of this culinary crime against humanity.

Healthiness aside, I have to admit that they’re beautiful. Blast you, Mitsuki Moriyasu!

Nothing is sacred anymore, friends. To learn more about this cafe and the food designer behind its signature dish, check out Vegedeco Salad Cafe’s website and follow them on Instagram.

WTFunds: How I Furnished My First Apartment For Less Than $500 | Betches