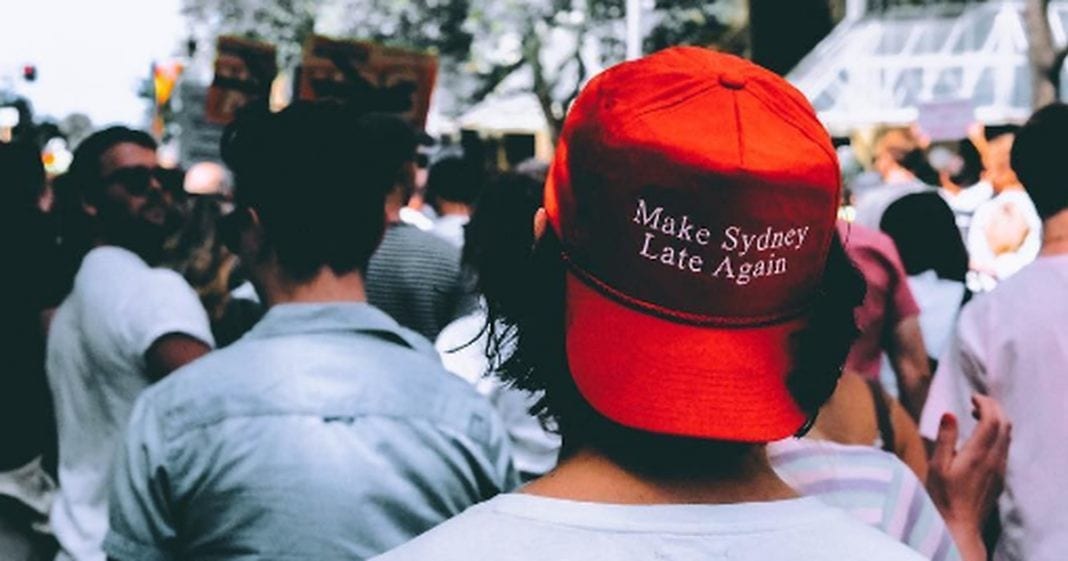 Finally, a red and white baseball cap slogan we can get behind.

The huge protest came just two days after anti-lock out law campaigners #KeepSydneyOpen released a report stating that since the introduction of the 1:30 a.m. curfew on entering bars, pubs and clubs in the city, alcohol-fuelled assaults are increasing rather than decreasing, as law-makers would hope.

SEE ALSO: The anthem for everyone hating on Sydney’s strict lock out laws

Under legislation, a bars and clubs in the lock out boundary are also being made to close at 3 a.m. and liquor stores must close by 10 p.m. Critics of the lock out laws claim tens of venues have been forced to close and hundreds of jobs have been lost.

Among those protesting down Sydney’s iconic nightlife strip Oxford Street, was Cold Chisel musician Jimmy Barnes, Paul Mac and a host all of Sydney’s DJs, MCs, indie bands and promoters.

And that’s not to mention party-goers and Sydneysiders concerned that the laws have lead to a critical cultural loss for the tourist-friendly city that’s home to the world’s biggest pride party, Sydney Mardi Gras.

#Dancefloorsnotpokiedens wishing I could have been there today to support #keepsydneyopen again, 10,000 people showed up for the second round of peaceful protest. I will be showing full support by two stepping up a storm on the d floor soon as I am back! If we aren’t free to dance the night away then I just don’t think we are free at all

“The lockout laws aren’t working. Weve got to help keep music alive and keep Sydney alive. Let’s find a better way to do it,” Barnes said in a Facebook video.

The report released by protest organisers was a response to an independent review of state liquor laws, which the government (under Premier Mike Baird) must respond to by the end of 2016. The report suggests violence from Kings Cross and the CBD has been displaced to alternative entertainment precincts further away from restricted areas.

It claims assaults fuelled by alcohol are 30 percent higher across the outer suburbs of Newtown, Bondi, Double Bay and Coogee.

Assaults are also 6 percent higher in the CBD and 9 percent higher across Sydney overall. Their conclusion? Not only are the lock out laws useless, but they’re hurting Sydney and its residents.

A silver lining in the darkness could be that the creativity and passion of Sydney people of all ages and backgrounds was showcased Sunday, with the city’s residents decorating banners and marching with pride and purpose.

The view of the #KeepSydneyOpen protest from the office. Insane amount of people down there. pic.twitter.com/4r1Z24UhCU

“It’s been an absolutely fantastic day and not only are we protesting the lockout laws and fighting for a better Sydney that stays open late and is more diverse and inclusive but were also showing Sydneys best version of itself,” Tyson Koh, founder of Keep Sydney Open campaign and co-author of the report, told the Guardian.

The second Keep Sydney Open rally kicks off today at 12pm in Belmore Park. Come support a vibrant Sydney nightlife and maybe a photo of your family will go viral! The last rally was an incredible experience – thousands and thousands of diverse people who care about the future of Sydney art, music and culture, lining the streets and raising their voice. Also, it was a sick party. Come be a part of the rally today so that future generations of chubby DJ/chefs can woo nightlife promoters/aspiring primary school teachers in a nightclub in the early hours of Sunday mornings! #keepsydneyopen

Needless to say, premier of the state Mike Baird was the butt of most jokes.

That one was the best #word #keepsydneyopen

Here’s how to make all your favorite foods from ‘Seinfeld’