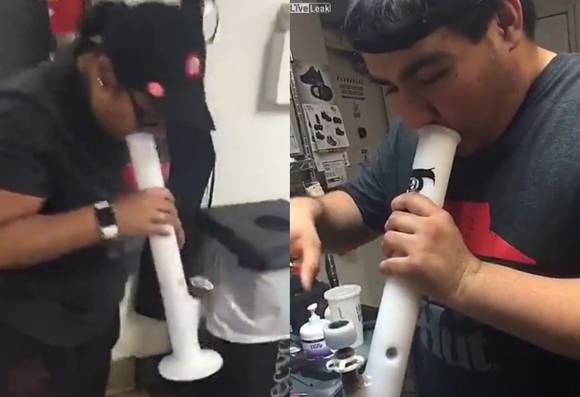 Working on New Year’s Eve can be quite the buzzkill.

But two Pizza Hut employees who were forced to work the December 31 shift decided to celebrate the night anyway!

Pizzas weren’t the only thing baking at the chain’s Cypress, California location as the calendar turned to 2016 — because the two pie makers decided to ring in the new year by taking hits of a huge bong during their shift!

And they probably would’ve gotten away with it, had they not recorded themselves getting high in the back room… wearing their Pizza Hut uniforms.

The video went viral shortly after surfacing on LiveLeak, and the two stars of the video were promptly fired!

The pizza chain released a statement about the incident, saying:

“There is no tolerance for this kind of activity at any of our restaurants. The local franchise owner took swift action and the employees involved will no longer work for Pizza Hut.”

We can only imagine how much pizza was munched on after the video was taken! LOLz!

Ch-ch-check out the behind-the-scenes baking (below)!!!

9 Delicious Breakfasts You Can Easily Prepare At Your Work Desk