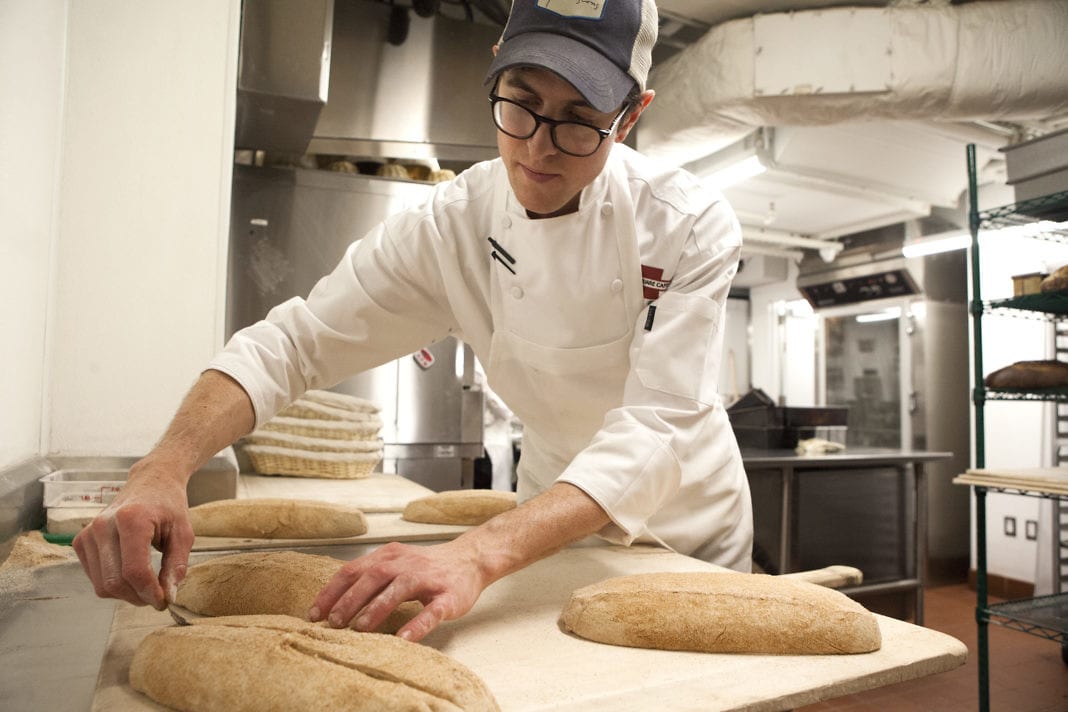 A table at Union Square Cafe is one of New York’s hardest reservations to score, but I recently had my pick of seats in the spacious two-level dining room.

Well, to be fair, I should mention that I was at the restaurant at 5 a.m., seven hours before the first diners would walk through the door for lunch service and just about five hours since the last guests had finished their dinners.

In this short shoulder period between meals, the establishment is eerily quiet—a sleeping giant. When I arrive, it is still dark outside as a winter sun begins to gently rouse itself and rain from a passing shower streaks across the restaurant’s oversize windows that look out over Park Avenue and East 19th Street.

Waiting for me inside the restaurant, which glows like Edward Hopper’s diner in his famous painting Nighthawks, is head baker Justin Rosengarten. Even at this early hour, which is when his day usually begins, he looks fresh and ready to go. Despite being a professional baker for only four years, the 29-year-old is, incredibly, Union Square’s first in-house bread baker. He’s a baking savant, with a degree in film, animation, and video from the Rhode Island School of Design and a previous stint working for a film director in Vermont.

Since restaurateur Danny Meyer opened Union Square Cafe 32 years ago—his first of many award-winning establishments and decades before starting his upscale Shake Shack chain—the bread has always come from a neighborhood commercial bakery. That arrangement wasn’t unusual: Many of the city’s top restaurants don’t actually bake, relying instead on contracts with bakeries that deliver fresh loaves every morning. It’s understandable, given the tight quarters of most spaces and the economics of operating a bread bakery versus devoting more real estate to profit-generating tables.

Meyer, who is known for doing things his own way, decided a few years ago to start baking bread at Gramercy Tavern. When a rent hike forced him to move Union Square Cafe from its original space on 16th Street, he was fortunate enough to find a new location four blocks away that had plenty of room for an extravagantly large pastry kitchen. (This new incarnation of the restaurant opened in December and still smells faintly of paint.)

Rosengarten takes pity on me when I arrive and kindly pours me a steaming cup of coffee. We then head through the dining room and down a flight of stairs to the well-lit pastry kitchen. Despite the early hour, it already feels like mid-afternoon (like a casino bustling in the middle of the night) with a number of bakers and chefs hard at work, including head pastry chef Daniel Alvarez, who started Gramercy Tavern’s bread program and serves as a mentor to Rosengarten.

In the corner, as the vertical stack of ovens warms up, Rosengarten begins to take out cloth-lined baskets holding dough that was made the previous day and proofed overnight. Each one will become a loaf of the restaurant’s signature sourdough bread.

Rosengarten deftly loads the oven with dough and as it slowly turns into bread the room is perfumed with a delicious almost popcorn-like smell. “The first bake always comes out the best,” he says. Why? Part superstition, part science, since the bread has plenty of time to proof and the ovens have recovered from the night before. Diners are presented with a plate of thick slices of this bread before their appetizers arrive, accompanied with a small crock of decadent salted butter. While the butter is appropriately rich, it’s almost unnecessary. The bread has a creamy texture and a thick, dark crust that seals in the flavor and texture. The restaurant uses stone-ground organic flour that is milled in upstate New York, Maine, and Canada. “It’s the ancient way of doing it, but it preserves the integrity,” says Rosengarten. “It’s good for the miller, good for the baker, and good for the customer, but it comes at a price.” This artisanal flour costs about four times more than the standard commercial brands, but this is, after all, Union Square Cafe.

The bread is so resilient that Rosengarten admits they’ll freeze loaves overnight and reheat them without any change in taste. (The hot sample loaf that I took home for research still tasted miraculously fresh days later.) One reason for its longevity is the ultra-dark, purple-black crust. It’s no mistake. Rosengarten and his team of four bread bakers are out for “full caramelization”; instead of setting timers, they watch the loaves bake. I’m tempted to pull them out of the oven when I think they look and smell done. But they’re not dark enough yet. The hardest part? “Don’t lose your nerve,” says Rosengarten, who admits that sometimes a batch may occasionally go too far. (I think he’s trying to make me feel better about my panic.) Given the kitchen now turns out 60 to 90 loaves a day, the process seems to be down to a pretty exact science.

One can judge the success of the bakery and the Union Square Cafe reboot by this bread. During his travels, Meyer tasted a bread in England that he wanted to be the house bread at the new version of the Union Square. He tracked down the baker, Ben Glazer, and lured him across the pond to work with Rosengarten on a recipe. Given the numerous factors that go into baking, from water to type of wheat to elevation, Rosengarten admits what they created may not taste exactly like what inspired Meyer, but that perhaps isn’t the point of the exercise.

Multiple trays of brioche rolls sit on another rolling rack. Each one will be sprayed with an egg wash and dusted with poppy seeds. To get the job done, Rosengarten uses a Rube Goldberg-like contraption consisting of a sprayer bottle head and a plastic quart container full of egg.

Rosengarten and his crew don’t only make the seven different breads for Union Square Cafe. When I visited, they were gearing up for the demand of the neighboring casual bistro, Daily Provisions, which just opened and sells a variety of sandwiches and prepared foods. That means the bread-baking team is now supplying an additional 13 different breads a day. Given Meyer’s success with Shake Shack, it only seems logical that if Daily Provisions is a hit we’ll see more locations around the city and that he’ll have to build an even bigger commercial bakery to supply them.

In the meantime, there is no time for such speculation. I can tell that I’m slowing Rosengarten down and he’s got a mountain of bread to bake. So I say my good-byes and head out into the waking city clutching my hot bread.

89 things to hold onto after the election (16 of which actually matter for...

Falling for feijoas: the fruit New Zealand wants the world to love